We are now at the end of science fair season (the final national prizes were handed out on March 15) and this year’s competitions took center stage. During his recent State of the Union address, President Obama called for a new generation of American innovators and scientists and gave young Amy Chyao the thrill of her life when he singled her out for winning the 2010 Intel Science and Engineering Fair top award of $75,000. Only by recommitting to our long tradition of innovation, Obama suggested, can Americans compete economically with China and other emerging Asian powerhouses. 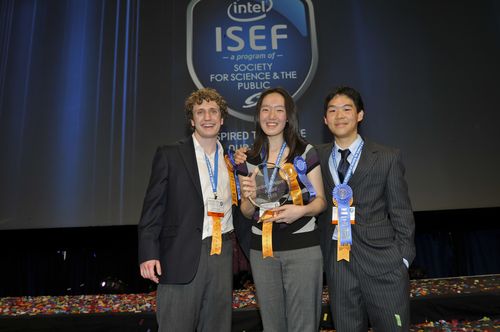 On May 14, 2010, Amy Chyao, Kevin Ellis, and Yale Fan earned top honors at the Intel International Science and Engineering Fair 2010, the world’s largest pre-college science competition. Chyao, 15, of Richardson, Texas, received $75,000; Ellis, 18, of Vancouver, Wash., and Fan, 18, of Beaverton, Ore., each received $50,000. This year, more than 1,600 young scientists from 59 countries, regions, and territories competed for more than $4 million in awards for their innovative research. Photo by Chris Ayers/Intel.

He called this battle for economic survival “our Sputnik moment,” harking back to the drive to ratchet up U.S. science and engineering education in the face of the sudden and shocking Soviet challenge in space, then seen as a dire threat to national security. America’s successful moon landing in 1969 seemed to validate the heroic scientific, technological, and educational efforts of that generation.

Obama’s rhetoric is not surprising. Science fairs and competitions are often associated with a call to arms in periods of perceived national emergency. The other side of that coin, however, is that in less urgent times science fairs and the hunt for innovative talent tend to fade out of public consciousness. Only the parents and relatives of the contestants seem to care.

America’s teenage innovators were not always asked to gird for battle. The initial impetus for the science fair movement some seventy years ago came from the nonprofit science news agency Science Service, founded in 1921 and known today as the Society for Science & the Public (one of the Smithsonian’s archival treasures is the records of Science Service; see my earlier post). In 1941, Watson Davis, director of Science Service from 1933 until 1967, created the nationwide Science Clubs of America, based on an earlier initiative in New York City. A year later, Science Service and Westinghouse co-sponsored the first science talent search (now sponsored by Intel) and a system of local and regional science fairs emerged, culminating in the establishment of a national fair (Philadelphia hosted the first of these in 1950). 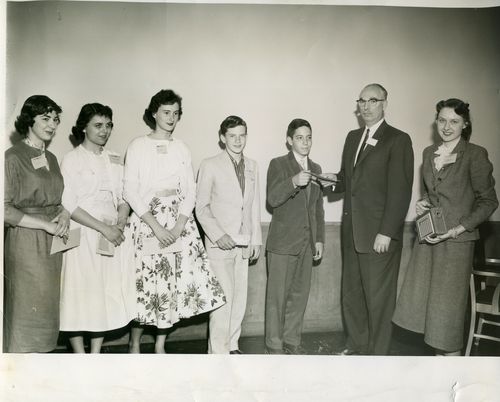 The author (third from right) experiences his own “Sputnik moment” as a science fair winner. Courtesy of Art Molella.

Although science fairs were born in the crucible of World War II, Davis saw them as far more than a wartime measure. He conceived the fairs in the context of Science Service’s agenda for promoting science and innovative technology among the general public, and had the ambitious goal of building a broad and sustainable youth science education movement. Davis was convinced that exposing the nation’s youth to experimental research—to actually doing science—was the best way to foster public appreciation of science. “For the future of America—for peaceful living, for industrial progress, for a successful democracy, for a strong and prepared nation,” Davis wrote in 1953, “this quest for scientific understanding must be accomplished.”

He envisioned a very broad-based movement that welcomed girls as well as boys. Far from being nationalistic, he also invited foreign student entrants and even helped establish science clubs abroad. In “Communicating Science,” published in the November 1953 issue of the Bulletin of the Atomic Scientists, Davis proudly declared that there were more than 15,000 affiliated clubs spread throughout the United States, representing more than one-third of a million members.

That these fairs and competitions continue today, still supported by the Society for Science & the Public, is a tribute to Davis’s vision and perseverance. But despite his efforts and the president’s call to action, a recent New York Times article (“It May Be a Sputnik Moment, but Science Fairs Are Lagging”) reports flagging interest in science fairs. Some attribute the decline to the myriad after-school activities and digital media that compete for the time of today’s high schoolers; others blame Obama’s own educational policies that they say stress math and reading scores over independent creativity and innovation.

A more important consideration, though, is if it is enough to court scientific and innovative talent only in times of national emergency. Watson Davis believed that understanding science and its social implications needed to be a lifelong pursuit: “It is no ultimate gain,” he wrote, “to save a life through penicillin only to have it wiped out by atomic radiation.” What would it take to reestablish and sustain the broad base of youthful and adult interest such as Watson Davis strove to achieve? That would be the real payoff of our current Sputnik moment.