Found in our military history collections: A Marine Corps tiara

“Where do you keep the tiara?” This was one of the first questions I was asked when I started work on the Military History Collections Project, a new mission in the Armed Forces History Division. The project is a pretty large undertaking—renovating several storage rooms that hold the military collections of the museum—but the highlight of most days is the little discoveries we make when going through (or inventorying) the objects in these rooms.

The inventory is important for several reasons. It will improve the museum’s ability to do what we do—research, care for, and share our knowledge about our collections. It’s also a necessary part of the storage renovation; before we can move objects to their new home in the renovated storage rooms, we have to get an idea of exactly what we have and where it is now. This inventory brings me back the tiara, perhaps one of the least likely objects to be found in a militaria collection. 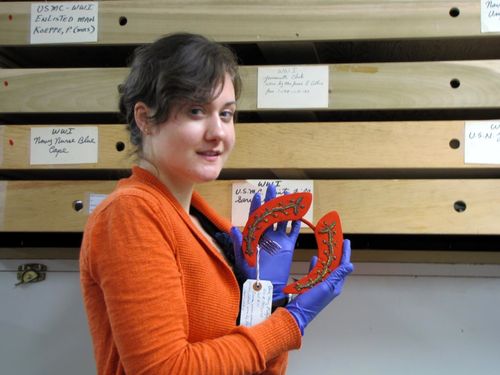 But the inventory team knew we had one; Bethanee Bemis, my coworker who asked where it was stored, had seen it listed in an old database we were using at the beginning of the project. When she started the physical inventory in one of the storage rooms, she insisted on seeing the tiara. It’s from a collection of women’s uniform items donated by a retired United States Marine Corps colonel. In the fifties, the tiara was authorized as part of formal dress attire (or “mess dress” in military terminology) for officers in the Army. The Army tiara is blue with oak leaves embroidered in gold. The Navy and Marines also adopted the tiara as part of their evening dress attire; the Air Force did not. In the photo below, you can see the four highest-ranking women from each branch of the military in their evening dress uniforms. I am partial to the Marine Corps tiara that is part of our collection; it is the signature red of the Marines that you find on many of that branch’s uniform items. 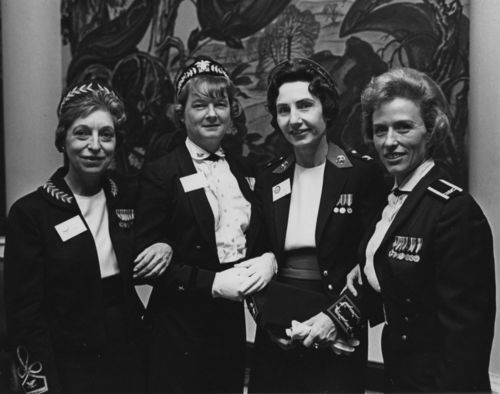 The tiara is part of the division’s collections that document the participation of women in military institutions. Since the 1980’s, curators in the division have been making inroads into establishing women’s military history as a field of study through scholarship and informed collection of material relating to women in the armed forces. This collection includes everything from articles of clothing worn by a camp follower during the civil war, to uniforms from various women’s organizations that participated in World War I, to the Battle Dress Uniform worn by a woman that was taken prisoner by Iraq during Operation Desert Storm.

Although the tiara might seem like a trivial part of the history of women in the military, I think it’s a compelling reminder of the changing face of the United States armed forces. This object is undeniable evidence that women were becoming a larger, more important part of the military. It also represents the progress women were making into higher-ranking positions—after all, the evening dress uniform of which the tiara was a part was expensive, and usually purchased and worn only by those women who were in top positions. High-ranking women in the military today even occasionally wear the tiara to formal events.

I’m glad our inventory team was so excited about this small piece of history. Their enthusiasm is a reminder of how objects can really illuminate the past and provide deeper understanding of some aspect of history, like women becoming part of the military, which seems so commonplace and inevitable nowadays.

The storage renovation and inventory continues here in the Armed Forces History Division, and I’m sure that there are more surprising, unexpected, and interesting objects that we will “discover” and blog about. Stay tuned . . .

Natalie Elder is the project coordinator for the Military History Collections Project at the National Museum of American History. Many thanks to Curator Margaret Vining for her help with this post.