David Baker and the original School of Jazz

During this 10th anniversary celebration of Jazz Appreciation Month, Smithsonian Jazz honors educator, composer, musician and longtime Smithsonian collaborator Dr. David N. Baker. Dr. Baker is Chairman of the Jazz Department at Indiana University’s School of Music, and Conductor and Artistic Director of the Smithsonian Jazz Masterworks Orchestra (SJMO). The Smithsonian Institution and Smithsonian Jazz are privileged to have had Baker’s input throughout his esteemed career. As a charter member of the SJMO, Baker has brought energy and expertise into the band’s 20th anniversary this year. The knowledge and experience he offers is a result of many important moments that forged his career, one of which is his time at the Lenox School of Jazz in 1959 and 1960. Baker received recognition for his trombone playing at the camp, but he also encountered ideas which are cornerstones of his work inside and outside of the Smithsonian. 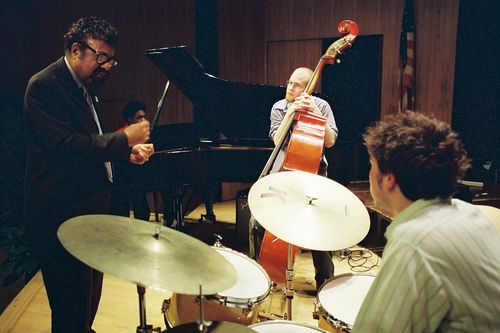 The Lenox School of Jazz
The School of Jazz first opened in the summer of 1957 at the Music Inn in Lenox, Massachusetts. The Executive Director of the school was pianist John Lewis, who joined a list of distinguished jazz figures comprising the first faculty, including Dizzy Gillespie, Gunther Schuller and George Russell. Students attended the camp on scholarship, took intensive history and theory courses and every night performed for one another alongside faculty. The all-encompassing experience has been a reference point for jazz musicians and educators, including David Baker.

Acquired Tastes
Recently, I spoke with Dr. Baker about the School of Jazz, and he emphasized how the school broadened his palette for music. At Lenox, students and faculty presented groundbreaking applications of jazz music. Gunther Schuller and John Lewis were the most prominent producers of third stream, and George Russell was a major developer of modal jazz.

In terms of moving forward, perhaps no student at Lenox represented that ideal more saxophonist Ornette Coleman. Already a bandleader by 1959, Coleman’s group had been exploring what would come to known as free jazz. When Baker first heard Coleman perform at the School of Jazz, he did not understand the music or George Russell’s insistence that free jazz was the future. However, Baker was willing to ask questions and learn, no matter how perplexing Coleman’s music initially appeared. In that way, Baker’s exposure to different jazz avenues fueled his curiosity and broadened his knowledge. 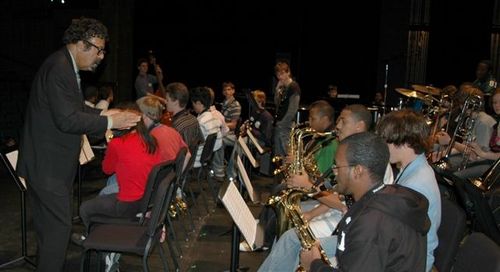 Jazz, Freedom and Democracy
On September 18, 1998, David Baker participated in "Jazz: An Expression of Democracy" at the White House. When I asked him about the relationship between jazz and democracy, he explained jazz is “the most democratic music” in the way musicians interact. From a musical standpoint, jazz exhibits freedom with cooperation, and, socially, the jazz community paved the way for integration. At the School of Jazz, blacks and whites performed, studied and lived alongside one another without dispute. The collaborative spirit at Lenox offered a lesson in humanity and undoubtedly influenced his participation in “Jazz: An Expression of Democracy” 40 years later.

Baker’s Mentor
During Baker’s two summers at Lenox, no teacher satisfied his passion for learning more than George Russell. Having developed the Lydian Concept, Russell enjoyed Baker’s constant questioning and sincere interest in theory. As a student and sideman of Russell’s, Baker admired Russell’s thorough understanding of jazz and willingness to teach:

[George] taught us how to play his music, and he exposed us to a concept – perhaps the only concept I know that has come out of jazz where every aspect of the music is rationalized in a meaningful way. The Lydian Concept is the only theory I know that leads practice rather than follows practice or codifies practice. So George taught us a lot about how music works. 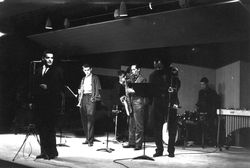 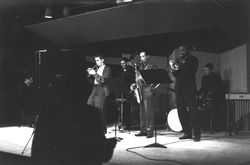 Baker (second from right, both photos) and The George Russell Sextet performing at the School of Jazz in 1960. Photographs by John Payne. Courtesy of George Schuller.

Russell greatly affected Baker in terms of theory and teaching, and he gave Baker his first major gig: a spot in the George Russell Sextet. The School of Jazz brought Russell and Baker together, and Baker found a lifelong adviser and friend.

Living History
One of the School of Jazz’s seminal achievements was the implementation of history courses. As Baker explained to me, jazz history courses are essential for two reasons: 1) Musicians are better equipped to advance the music if they understand the past, and 2) The general population should know about jazz music, which may be the United States’ principal artistic export.

One of Lenox’s history teachers who directly influenced Baker is Gunther Schuller. When the Smithsonian Jazz Masterworks Orchestra was established in 1990, Schuller and Baker were its co-Artistic Directors and Conductors. Their contributions to jazz repertory have helped breathe life into standards and masterpieces, and as Schuller once told Baker, “any music not heard live is doomed to extinction.” In both performance and teaching, Baker has emphasized historical context.

Baker’s growth at the School of Jazz benefits Smithsonian Jazz and the Masterworks Orchestra today. Whether Baker is developing a diverse SJMO concert program or educating audiences on jazz history, Lenox’s influence remains. 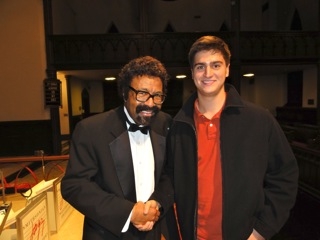 Baker and me after the 2010 Smithsonian Jazz Masterworks Orchestra Christmas concert. Photograph by John Hasse.

If you would like more information on Smithsonian Jazz or upcoming SJMO concerts, please contact Executive Director Ken Kimery at kimeryk@si.edu.

I would like to thank George Schuller for locating photographs of Baker taken at the School of Jazz. George contacted several former Lenox students and photographers on my behalf. His unique efforts are greatly appreciated.