In pursuit of Jewish sampler makers

Mr. Isadore Warshaw began collecting business ephemera in 1928 that would later come to the National Museum of American History under the name “The Warshaw Collection of Business Americana.” In this collection was a sampler worked by “B. Laxarus 1843.”

By the 1700s, samplers depicting alphabets and numerals were worked by young women to learn the basic needlework skills needed to operate the family household. If they attended school, needlework was often the first thing they learned along with reading and writing. If a sampler contains only alphabets and numbers, it is called a “marking sampler.” 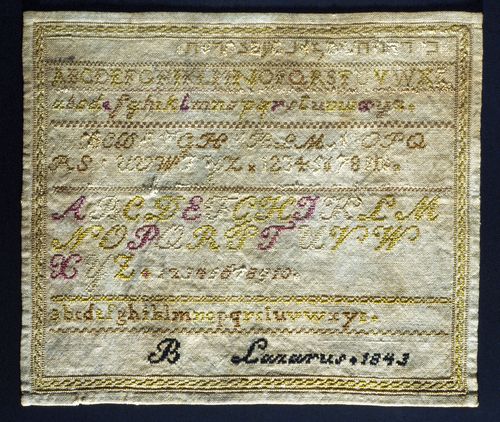 Front of the B. Laxarus sampler, 1843. From the National Museum of American History Collections.

There are two block alphabets with no “J,” and three script alphabets also with no “J.” Many early samplers do not have the letter “J” in their alphabets because they were not part of the early Latin alphabet and so the letter “I” was used for the “J.” It has the numbers from one to ten. The alphabet letters and numbers are each worked in a repeating sequence using just a few colors. Between the alphabets are six narrow geometric cross-bands. On the bottom of the sampler is the inscription: “B. Laxarus 1843.” It measures 11 1/8” L x 9 ½” W.

Samplers that contain a Hebrew alphabet are very rare and therefore of great interest to researchers. Is “B. Laxarus” a boy or a girl? Did he/she misspell his/her last name? Should it be “Lazarus?” 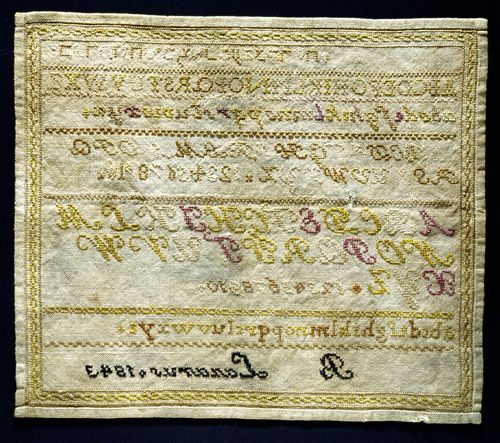 Back of the B. Laxarus Sampler, 1843. From the National Museum of American History Collections.

Notice the neatness of the back of the sampler. It has been stitched in a reversible cross stitch. This is a characteristic of samplers stitched in the southern part of the United States.

The Textile Collection has another, recently acquired, sampler that is almost identical to this one, but has the name “B. Hollünder 1845” on it. The top line of this sampler is completely filled with the Hebrew  alphabet. The other alphabets are stitched in the same style of a repeating sequence using just a few colors and it has the same border design as the one worked by B. Laxarus. B. Hollünder also just included the first initial of his/her first name. It measures 10” L x 9 ½” W. 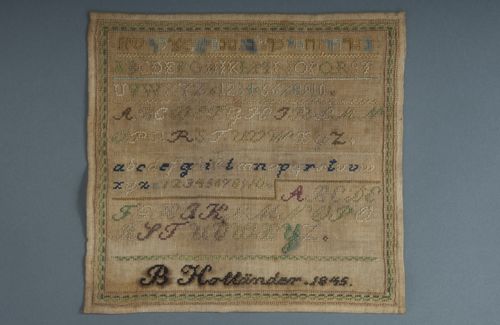 This sampler by B. Hollünder, 1845, is strikingly similar to the B. Laxarus sampler, 1843! From the National Museum of American History Collections.

The similarities would suggest that these were done in a school with the same teacher. But where might this school be? The umlaut on the Hollünder name may indicate that she was German and a Jew. Since the first names were not included it has been impossible so far to find them. Charleston, South Carolina, had an early Jewish population so it is a possibility as well as Miami, Florida, since Mrs. Augustus Levy Warshaw came from Miami.

The B. Laxarus sampler and fifty more from the collection can be seen in the online collections. Watch for more to be added in the near future.

There are 137 American samplers in the Textile Collection. The first was donated in 1886, the Margaret Dinsmoor sampler. The earliest dated sampler in the collection was made in 1735 by Lydia Dickman of Boston, Massachusetts.

Help us further our knowledge of samplers and other needlework stitched by Jewish boys/girls by helping us find these young boys/ladies. Do you know of any other 18th or 19th century Jewish American samplers or needlework? Contact the museum at dejongs@si.edu.

Sheryl De Jong is a volunteer in the textile collection, Division of Home and Community Life, at the National Museum of American History. 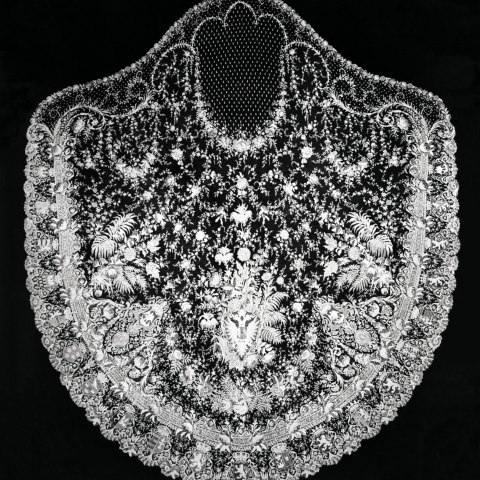