30 years of HIV and AIDS in America

This summer will mark 30 years since the first official reports of HIV and AIDS. It was not called that back then, of course, and all anyone knew is that people—first young gay men, then heterosexual women, injection drug users and then hell broke loose—were sick with diseases that were highly unusual for them. The importance of this history lies both in the sheer notoriety of the virus and in the significant impact the syndrome has had on American science, life, and culture. The global impact is equally immense. AIDS is the most publicized disease of the past thirty years and has become a household word. The museum is producing a showcase exhibit, website, and archival display that will provide some historical context for this. 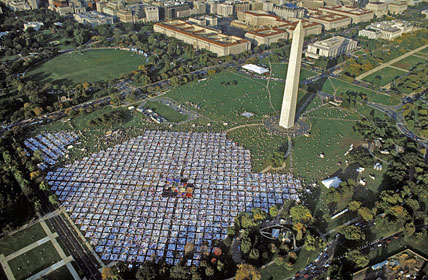 The AIDS Memorial Quilt displayed on the National Mall in Washington, D.C., 1992

The history of HIV-AIDS has been told many times, from different perspectives. Analysis is widely available on the internet and in professional journals, books, and newspapers, and don’t forget the health information distributed everywhere from doctor’s offices, schools, grocery stores, and restaurants, to phone booths and gas station bathrooms. Rather than simply replicate what others have done and aware that we can’t tell much of the complicated history in a small space, we decided to concentrate on the earliest years, 1981-1987.

Another reason to focus on the early years is the dramatic difference in tone and urgency when compared with today. My interns and other young people with whom I work approach STIs (sexually transmitted infections) and protection as largely uncontroversial and not very interesting. They have little comprehension of the intensity of the conflict that surrounded public discussion of sex, drugs, condoms, and LGBTQlegitimacy back in the 1980s. Figuring out how to do this piece of history and not misrepresent or overlook important details of what was happening is, to say the least, stressful. One way to work through some of the issues that don’t lend themselves to the exhibition format or are too intricate to be included, is to occasionally blog about the history of HIV andAIDS over the next year. Blogging will also give us an opportunity to introduce new voices and ideas into the historical record. 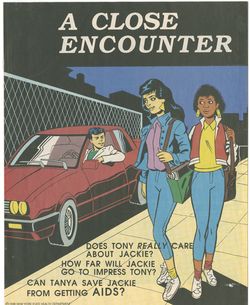 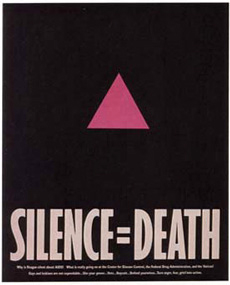 The museum has a strong collection of objects related to HIV and AIDS. We have been collecting objects and other materials almost from the beginning. The ephemera are especially rich, such as ACT UP posters, demonstration flyers, health information pamphlets, and magazines. We also have lab equipment from Jay Levy’s San Francisco lab (one of the scientists who isolated the virus), various medications, lots of condoms, needle exchange objects, political buttons and T-Shirts, an AIDS Memorial Quilt panel for Roger Lyons, red ribbons, and more. Obviously, way more than will fit in a showcase.

Editor’s Note: Stay tuned for more posts about the 30th anniversary of HIV and AIDS throughout the year and check the companion website. What do you think of when you read that 2011 marks 30 years? Share your story with us here.

Katherine Ott is a Curator in the Division of Medicine and Science at the National Museum of American History.