Trumpet and flugelhorn virtuoso Clark Terry has first-hand experience in many notable chapters in jazz history. His lifelong devotion to jazz’s development exemplifies the spirit of the Smithsonian’s Jazz Appreciation Month. 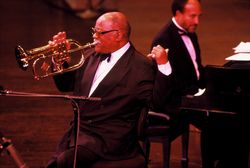 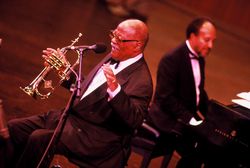 Clark Terry with the Smithsonian Jazz Masterworks Orchestra in 1999. Photographs by Hugh Talman.

Dewey Jackson was a trumpet player himself… And they used to say that he was the loudest player – cat that ever came down the Mississippi River… [his band was] playing jazz. That’s how I got involved [in jazz].

Terry started on homemade instruments and eventually bought his first trumpet for $12.50 from a pawn shop and began his journey in jazz.

While in New York City in 1948, Terry received an invitation to audition for Count Basie’s orchestra. Intent on seizing the opportunity, Terry stretched his playing beyond his usual limits:

When Basie dismantled his orchestra in 1950 due to financial difficulties, he kept Terry as his sole trumpeter in a newly-formed small group. Alongside clarinetist Buddy DeFranco and saxophonist Wardell Gray, Terry was a key soloist and personality in Basie’s performances:

By 1951, Terry’s talent drew the attention of Duke Ellington. In fact, Ellington wanted Terry in his band so much he ignored Terry’s rudeness the first time they spoke:

Terry played with Ellington for nearly a decade, and he acknowledges the importance of that experience:

With the wealth of talent Ellington employed, breaking into the ranks of the orchestra proved challenging for Terry. However, Terry’s talent shone through time and again, and Ellington and Billy Strayhorn would write features for Terry, such as “Hey, Buddy Bolden” from A Drum Is A Woman and “Up and Down, Up and Down” from Such Sweet Thunder.

Terry has mentored generation after generation of jazz greats, including Miles Davis, Quincy Jones and Wynton Marsalis. Terry’s willingness to teach is a reaction to his youth, when older musicians seldom taught aspiring musicians for fear of losing work. In contrast, he has always felt it is important to pass knowledge to younger generations so the music may continue to grow. 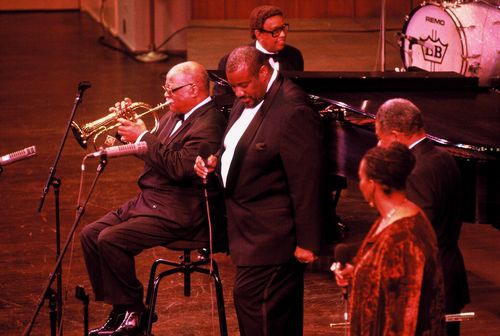