Editor's Note: This post is the third in a series about the museum's Military History Collections Project.

Think about some of the items that you use most frequently. A toothbrush, socks, underwear. Now consider some of the items that you would think to save for posterity. A wedding dress, perhaps, photographs, a military dress uniform. Since museum collections evolve based largely on what people from the past have saved, they tend to be heavy on “special occasion” objects and light on everyday items. Yet it is those everyday items that remind us most tangibly that the people who participated in our history were real, were human, were like us—and, perhaps, that we can be like them. For this reason I am particularly drawn to the personal objects that the inventory team has found in our journey through the Armed Forces History Division’s collection.

Some of what we’ve found illustrates the humanity of those who served in our armed forces. Razors and razor blades, a soap dish with soap residue still encrusted inside, items such as these offer a visceral connection to the soldiers and sailors who used them. 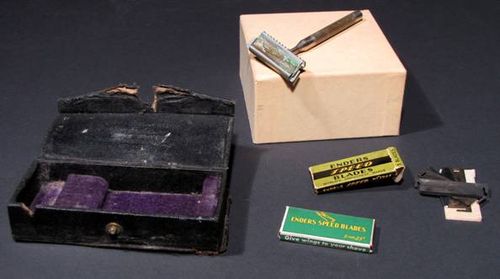 I commend the bravery of anyone who is willing to put their underwear up for the possibility of public display. A jockstrap worn by Robert S. Clark as a midshipman at the Naval Academy in the 1930s. A collection of olive drab boxers from Marine Robert G. Walther. Two sets of bras and underwear worn by Claire Sebrechts while a midshipman in the first graduating class at the Naval Academy to include women. All these objects show that underneath the uniform, the men and women in our military still have to follow many of the same rituals as the rest of us. To use an old saying, they put their pants on one leg at a time.

Some of the objects we’ve found drive home the personal nature and individual costs of the large military conflicts that we’ve come to know mainly through history classes and big-budget action films. It’s easy to lose perspective of the individual in war when there are so many individuals involved. We know, for instance, that a set of used razors and razor blades belonged to Ensign Franklin Loucks, Jr., when he served in the Navy circa World War I. Not only do objects like razors remind us of the intimate humanity of a soldier, but in this case they give us a connection to one soldier specifically, a reminder that an army is made up of individuals like Franklin Loucks. A metal bracelet bearing the Marine Corps anchor and globe insignia that we found among a stash of jewelry and coins is a remnant of the cost of war at home. Known as sweetheart jewelry, the bracelet was meant to be worn by an individual whose significant other was serving in the armed forces during the world wars, a tangible sign of the bonds soldiers have with people they are forced to leave at home. In this case, the bracelet belonged to Wanda Alberini, who served as a Lieutenant in the United States Marine Corps Women’s Reserve during World War II. 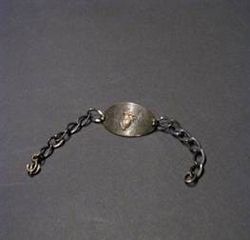 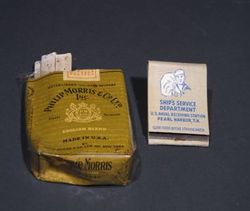 One drawer contained an open package of cigarettes and a partially used book of matches given to sailors stationed at Pearl Harbor. The cigarette package contains several Philip Morris & Co. Ltd. Inc. English Blend cigarettes that still smell strongly of tobacco, sensory reminders of the downtime of an individual sailor.

The Armed Forces History division has a vast collection of uniforms, weaponry, and other items that you would normally associate with military history. These items are important and interesting in their own right, but I can’t help but feel a bit of extra excitement when the inventory team comes across one of these personal items that give me pause to consider the individual to whom it once belonged.

Bethanee Bemis is a physical inventory specialist working on the Armed Forces History Collections renovation and inventory project at the National Museum of American History.