In the nano-world, anything can happen

In Michael Crichton’s 2002 sci-fi thriller, Prey, Jack Forman, a Silicon Valley computer programmer with serious job and marital problems, has been thrust into a military experiment in nanotechnology that has gone haywire. Xymos, a defense contractor on the Nevada desert, has developed molecular-scale cameras that can be injected into the bloodstream to monitor diseases—think Fantastic Voyage without Raquel Welch. The medical application, however, is only a cover for what they are actually making: clouds or “swarms” of tiny nanoscale cameras designed to spy on the enemy.

Jack’s wife works for the same top-secret firm, and things quickly get terribly personal for him. But his real problem is trying to bring a runaway technology back under control. It seems that Xymos has magically achieved the fantasy goal of nanotechnology: not only creating molecules by manipulating atoms, but programming atoms to come together on their own, a process known as “self-assembly.” The problem is that, once they can self-replicate, these nanoparticles start to behave functionally like living creatures; they don’t need humans anymore and anything can happen. Armed with a smidgeon of artificial intelligence, the swarms, so called for their mimicry of the social behavior of bees, are able to learn and evolve with astonishing speed. They go after Jack and anyone who threatens their freedom. The whole world is at peril. Jack wins, but just barely.

Prey ends with some unbelievable death-defying scenes and, for the sake of a good yarn, takes this still-infant technology to implausible extremes. But like the best science fiction writers, the late Crichton could be remarkably prescient about technological breakthroughs, if not their human and social impacts, which are always up for grabs. For example, as I write this, a DARPA-funded company is showing off a tiny flying gadget, its so-called Nano Hummingbird, complete with spy video camera—not strictly nano but on the road to it. 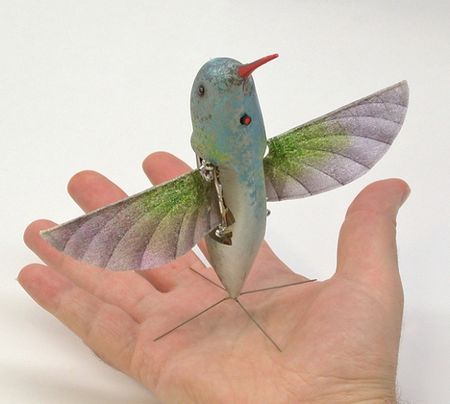 A counterbalance to Crichton’s dystopian vision is the one given by theoretical physicist Michio Kaku in his new book, Physics of the Future. Sensitive to the critiques of nanotechnology, he asks if it will “unleash the fire of enlightenment and knowledge or the winds of chaos?” Kaku looks on the bright side and opts emphatically for the former view; it can and will be controlled, he insists. He then takes us through near, middle, and far future scenarios, based on interviews with working scientists. His examples include super gyroscopes, designer molecules that hunt down cancer cells, DNA “on a chip” that monitors our health, remote-controlled “nanocars” that patrol our bloodstream for cancers (Fantastic Voyage, again), carbon nanotubes stronger than steel, non-silicon substrates for faster chips and computers, shape-shifting and self-healing structures (think here Terminator II), and the nanotechnologist’s holy grail, the “replicator” that perhaps by 2100 will manufacture everything at the atomic level practically from nothing, including body organs. The world’s major problem will then be the sociopolitical one of learning how to cope with this limitless supply of goods.

History tells us that dawning technologies, especially the more powerful ones, commonly provoke these divergent expectations. In his fascinating new book, The Information, James Gleick documents this with technologies from the telegraph and the telephone to the internet. Initial euphoria gives way to fear and anxiety about information overload. But, like Kaku, he puts a positive spin on his subject with some convincing arguments in its favor.

These divergent visions seem particularly pronounced in the case of nanotechnology, even though scientists and engineers have barely scratched the surface of its possibilities. Let me suggest one reason for this. Unlike any other technology to date, nanotechnology operates exclusively in the atomic realm. At the level of the ultra-ultra-small, everything is strange and mysterious. In a 1959 talk titled “There’s Plenty of Room at the Bottom,” generally recognized as the founding vision for nanotechnology without naming it as such, physicist Richard Feynman described some of the strange, commonsense-defying physics that comes into play. In addition to very short-range electrical forces that cause atoms to hew to one another in strange ways, there are the overriding laws of quantum mechanics that take charge at the nano level. It’s a bizarre world of ultimate uncertainty where particles can be in two places and two states at once or even disappear and then reappear someplace else. Feynman once observed that quantum mechanics “describes nature as absurd from the point of view of common sense.” [1] A mysterious world indeed, where it seems anything can happen.

It is a measure of the potential and newness of the technology that the public knows of it mainly through fiction and films. To explore today’s nano reality, though, we recently participated in NanoDays 2011, a nationwide festival of educational programs about nanoscale science and engineering. In the Lemelson Center’s Spark!Lab, our hands-on invention space, visitors of all ages learned about nanotechnology through activities that ranged from measuring their height in nanometers to building a giant model of a carbon nanotube entirely from balloons. At the Lemelson Center, we believe that the tiniest spark of an idea can have widespread impact on everyday life, and with these activities, we sought to fire the imaginations of young people about nanotechnology, without overstating its promises or its dangers.

1 Feynman is quoted in Michio Kaku, Parallel Worlds: A Journey through Creation, Higher Dimensions, and the Future of the Cosmos (New York: Anchor Books, 2006), p. 157. 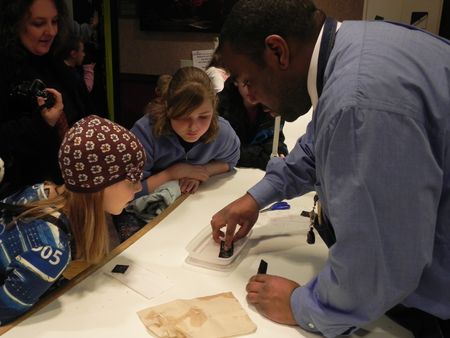