Inspiration from the 50th anniversary of the Freedom Rides

One of the things I love most about being a public historian at the nation’s history museum is how the past comes to life every day. As the director of the museum’s Program in African American Culture, I have had the privilege of meeting people who made history and changed the destiny of this nation. For more than 30 years, the Program has documented and shared the story of the Civil Rights Movement of the 1950s and 60s through living testimony from folks who were there. The countless stories and courageous decisions we have presented show this movement was about so much more than the few remarkable people whose names we all know. 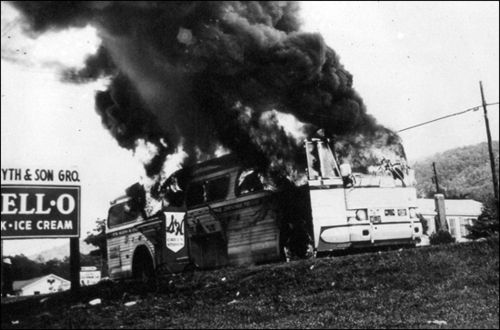 As we have marked the passing of fifty years since this staggering uprising of ordinary Americans, I have talked with dozens of people whose courage and commitment forced our nation to come closer to living up to its ideals. I’ve met people like the Greensboro Four and Rev. James Lawson, whose bravery and resolve seemed breathtaking and otherworldly to me in high school when I saw their grainy images on news footage in documentaries like Eyes on the Prize. I’ve met people, like Mabel Williams, whose militancy seemed frightening and off-putting when I read about them in college. And I’ve met people like Rosa Parks and Congressman John Lewis, whose intelligence, determination, and selfless passion for justice would make anyone think “I could never be like that.”

Today is a good day to remember that we all have the capacity to take our citizenship and ideals to heart and have the power to make a tangible difference in the course of history. Fifty years ago today, two ordinary buses left Washington headed south. In addition to the regular passengers who rode on them were a group of activists known as the Freedom Riders. Riding together in interracial groups on buses and trains, they put their bodies and freedom on the line by challenging Jim Crow laws that enforced racial segregation in interstate travel.

During the spring and summer of 1961, more than 400 Americans became Freedom Riders. Young and old, male and female, black, white, and Asian, religious and secular, Southern and non-Southern – the Riders represented a cross section of America. Criticized by some for disrupting the social order and engaging in civil disobedience, the Riders were actually doing exactly what the United States Supreme Court said they had a right to do. While Southern officials chose to ignore two Supreme Court rulings that struck down racial segregation on interstate buses and trains, and in the terminal waiting rooms, restaurants, and restrooms that served interstate travelers, the Freedom Riders were determined to exercise their constitutional right to sit and eat where they pleased. They did so knowing full well that the simple act of violating long-held traditions of racial segregation and white supremacy would almost certainly lead to arrest and imprisonment, and might even cost them their lives. Propelled by faith in nonviolence and the hope that the country could be awakened to the promise of democratic renewal and social justice, the Riders endured beatings, bombings, harassment, and imprisonment. In the process, they drew the Kennedy administration into the gathering movement for civil rights and, even more importantly, demonstrated the power of ordinary people to effect great social change.

In February the Smithsonian hosted a National Youth Summit, in collaboration with the National Endowment for the Humanities and WGBH/American Experience, which brought together middle and high school students here, online, and at the Japanese American National Museum, the Birmingham Civil Rights Institute, the Senator John Heinz History Center, the National Underground Railroad Freedom Center, and the Arab American National Museum to meet Freedom Riders and discuss the role of young people in shaping history. I entered the planning for this event with one real hero among the Riders: Diane Nash. As a teenager, the image of the young Nash persuading the mayor of Nashville to admit the injustice of segregation in front of news cameras in 1960 captivated me. Who was this Fisk University student with grace and strength enough to bend her oppressors toward justice? After meeting her, she’s even more of a hero to me and I wish for every young person the opportunity to be inspired by her story. I came out of the last year working on the Freedom Rides, however, with scores of new heroes. Riders still represent America—veterans of the Rides live in communities all across the nation and they still have much to teach us. What is most inspiring about the Riders is how the ordinary can be extraordinary. These heroes are not marble models, but everyday people who lived for a history not yet written.

“The Student Leader”: a short film about Diane Nash from the movie Freedom Riders. Watch the full episode or see more American Experience.

Fifty years ago today a Greyhound bus and a Trailways bus pulled onto the highway toward New Orleans, but destined for firebombs and riots in Alabama. Their legacy lies not in the violence that stopped those two buses, but in the freedom that rose from the flames and blows. As Langston Hughes wrote, “No bomb can kill the dreams I hold, for freedom never dies.”

You can learn more about the Freedom Rides when the American Experience documentary Freedom Riders debuts on your local PBS station on May 16th. You can also watch a full archived webcast of our National Youth Summit on the Freedom Rides.

Christopher Wilson is the Director of the Program in African American Culture at the National Museum of American History.