Editor’s Note: This is the second post in a series exploring the 30th anniversary of HIV and AIDS. Beginning on June 3, the National Museum of American History will mark the anniversary of the emergence of the HIV and AIDS epidemic with a three-part display and companion website. This blog series provides additional context and includes the perspectives of people directly involved in the history the museum is documenting. 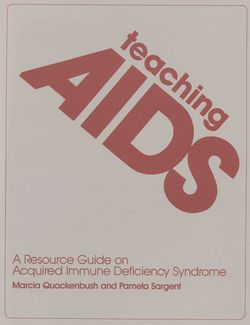 Marcia Quackenbush was a social worker in San Francisco in the early 1980s and wrote one of the early textbooks for K-12 teachers, Teaching AIDS. Interviewer John O'Keefe is a guest assistant curator of the showcase display “HIV and AIDS 30 Years Ago” and is finishing a doctorate in American Studies at The George Washington University.

JO: Tell us about how you got involved with HIV and AIDS while doing social work.

MQ: I was hired at the UCSF AIDS Health Project pretty much fresh out of my graduate program, San Francisco State University’s Counseling program. It was 1984, and I was one of seven staff hired at the start of the project. They wanted people who were fresh in their thinking, able to try out new things, willing to shift perspectives when necessary.

I was one of two people assigned to an AIDS prevention program for youth. That’s where I focused much of my earliest work. I don’t think there was any other youth-focused AIDS prevention program in the country. There were maybe four adolescents in the entire nation [diagnosed] with AIDS at that point, and they were teens with hemophilia. We had a hard time convincing youth service providers in the city that AIDS was a concern for their clients.

JO: What was it like teaching about HIV and AIDS in a K-12 school setting?

MQ: I remember going to one high school for an after-school inservice for the entire teaching staff. At one point, someone asked, “What should I be saying in a class if I learn that one of the students has AIDS?”

I replied, “It’s confidential medical information, and unless the student or family chose to tell the school, no one would know.”

This caused almost instant pandemonium in the room. One of the P.E. teachers actually spit his coffee out all over the floor, he was so shocked. There was this universal outcry: “What?” One of the coaches started yelling at me. “My kids play hard. They bleed. If some kid has AIDS, are you telling me I’m not going to know that?”

I was able to get the group calmed somewhat, and spent the rest of the meeting talking about universal precautions for infection control. There was an amazing level of fear at the time. These are the ways it came out.

We also didn’t have very good awareness about LGBTQ kids in schools. I don’t think any school-based Gay-Straight Alliances existed at the time. I facilitated a drop-in group at the Pacific Center in Berkeley while I was in graduate school. The group was an amazing resource. Most felt they could not come out at school. Those who did sometimes got suspended, expelled or otherwise disciplined for it.

Early in this period (before there were many young people with AIDS), I did some work at a juvenile correctional facility. I told the director I would specifically be talking with young people who might be engaging in risks for AIDS. “And who would that be?” he asked.

“Well,” I answered, “young men who are having sex with other men. Young women who are having sex for money. Anyone using injection drugs.” (This list was limited because of our limited understanding of AIDS—we didn’t know then that ANYONE having sex could be at risk.) “We don’t have many of those kinds of juveniles here.” A baffling statement, really. I don’t know if he truly didn’t have a clue about the risk behaviors of the youth detained there, or he was just being obstreperous. But he took a couple of long, slow weeks to decide whether I’d be allowed to do this work. 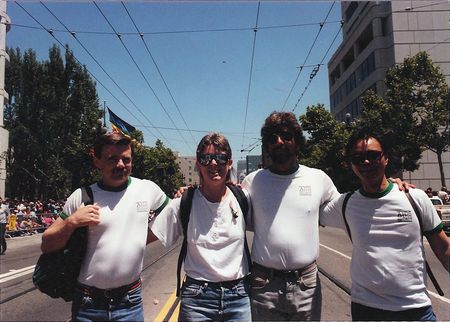 JO: What has stayed with you about those early years?

MQ: The thing that comes back to me when I reflect on these early days of the epidemic is how profoundly affected we were, the community of people working in AIDS services.

We hoped that there would be an answer. A treatment that worked. A vaccine. As the numbers of teens with AIDS and HIV began to rise, I felt heartsick. I’d see a teen or young adult with HIV talking on a panel at a conference and think, “Did I see you hustling on Polk Street back in 1984? Did we talk? Did what I say have any impact at all?”

I once returned after a three week vacation. As I walked into work, I learned of six people I’d known who had died while I was away.

We’d hear about friends who had died, cry for 10 minutes, then go on to our work. It needed to be done. A close friend of mine was doing intakes for our project one night. He took a 20-minute break to go get his own HIV test result, which turned out to be positive. And then he went back to his intakes, providing words of encouragement and support to others for the rest of that night.

The display HIV and AIDS Thirty Years Ago opens June 3 at the National Museum of American History. Visit the companion website at americanhistory.si.edu/hivaids.