Stubby the dog, known to many as “Sgt. Stubby”, is one of my favorite artifacts in the Armed Forces History collections. He was the mascot of the 102 Infantry 26th Yankee Division in World War I. He showed up at training camp one day on the grounds of Yale University, and was such a hit with the soldiers that he was allowed to stay (he would drill with them, and even learned to salute). When it was time to ship off for Europe, Stubby went along for the ride to Newport News, Virginia, and was smuggled by Private J. Robert Conroy aboard the SS Minnesota. Upon discovery by Conroy’s Commanding Officer, the story goes, Stubby saluted him, and the CO was so impressed he allowed Stubby to remain with the troops. Stubby took to soldiering quite well, joining the men in the trenches. He was gassed once, and wounded by shrapnel another time, and once he disappeared for a while, only to resurface with the French forces who returned him to his unit. Stubby even captured a Hun (that’s World War I slang for a German soldier)!

When the war ended, Stubby returned to the states with his companion Bob Conroy (note: I don’t say owner, because anyone who has dogs will tell you that it’s debatable about who owns whom) and to a certain amount of celebrity. Conroy enrolled at Georgetown University to study law, and Stubby became the mascot for the Hoyas. There were visits to the White House, a meeting with General John J. Pershing, parades galore, even a vaudeville appearance. Stubby touched the hearts of many, the hero dog who followed his buddies to war, and when he died in 1926 his obituary ran in several newspapers.

After Stubby died, he was stuffed and mounted (actually, his skin was placed over a plaster cast, and the rest of him was cremated and placed inside the cast), and was lent to the Red Cross Museum where he was on display for many years. On May 22, 1956, Bob Conroy donated Stubby to the Smithsonian Institution, and he was put on display in the National Museum (now the Arts and Industries Building, next to the Smithsonian Castle). And after that, well, Stubby went into a crate and stayed there for many years, in one of the storage rooms of the Division of Armed Forces History in the American History building. And that’s where I met him, when I began working with that division in the late 1980s.

I’ve had an affinity for animals since I was a toddler, especially dogs. (In my life, I’ve had: 3 mutts, 1 Collie, 1 Cairn Terrier, 1 Beagle, and 4 Labrador Retrievers!) So it was only natural for me to become interested in the story of Stubby. In 1998, the Connecticut National Guard inquired about a loan of Stubby to their museum, so he came out of his crate and went on display in Hartford for a few years; during that time, we began planning the exhibition The Price of Freedom: Americans at War which had a World War I section. When the exhibit was installed in 2004, we made sure Stubby was front and center, where he is today. 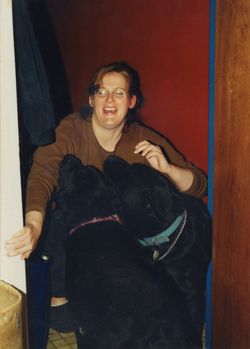 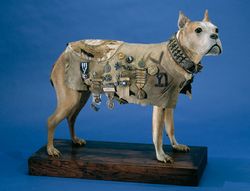 Stubby wearing his coat and collar

Now, Stubby is again enjoying a certain amount of popularity. In the past few years, I’ve received numerous inquiries about Stubby from children’s book authors, aspiring screenwriters, and even pit bull advocates who see Stubby as a role model (to whom I reply, Stubby was of no particular breed, he might have had some American Staffordshire Terrier blood, and I have nothing against the breeds currently categorized as pit bulls). He has his own Facebook page, and is the subject of several others. Maybe one day soon, a theater near you will be playing “Stubby Goes to War” or the local bookstore will be displaying Stubby: A Dog’s Life in the Trenches on the shelves by the door. Meanwhile, Stubby will be waiting for visitors in the WWI case of “The Price of Freedom,” along with Cher Ami, the hero pigeon who saved the Lost Battalion. But that’s another story.

Kathleen Golden is an Associate Curator in the Division of Armed Forces History at the National Museum of American History. If she wasn’t in the museum business, she’d be a veterinarian. Or a dog sitter.