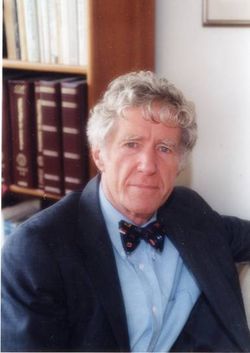 Lester R. Brown is the president of the Earth Policy Institute.

Lester R. Brown is one of the few authors laying claim to an entire shelf of my personal library. After having read his books and essays for decades, I now find myself adding an unusual batch of material from this renowned environmentalist to the collections here at the museum.

With over 50 single- or co-authored books to his credit, with his writings translated into over 40 languages, and with some 26 honorary degrees and scores of international awards (including a 1986 MacArthur Fellowship), Brown is among the most recognized and influential environmental and economic analysts on the planet.

When the museum hosted a life-history interview with Brown in 2009, my colleagues and I were inspired to consider what we might collect to document his life and work. Brown’s publications, of course, were already well represented in libraries around the world, including the Smithsonian Institution Libraries. We soon discovered that he had made arrangements to donate his correspondence, photo albums, and unpublished papers to the Library of Congress’s Manuscript Division. Quite properly, our focus would be on artifacts, especially those that would complement and enhance the museum’s collections relating to the history of environmentalism in the United States.

In this case, choosing the appropriate artifacts was no straightforward matter. When it comes to assembling the tools of a professional’s trade, there is a world of difference between an equipment-dependent person like Julia Child and someone like Brown, an ascetic who has devoted himself to words and ideas. The Spartan lifestyle and work habits he embraced as a young man followed him throughout life, and—save for his writings—did not leave an especially large wake of material objects.

My colleagues and I met twice with Brown and Earth Policy Institute vice president Reah Janise Kauffman to discuss how Brown practiced his craft as an analyst, writer, and public speaker, all with an eye toward determining what the museum might collect. Here is a sampling of what we ultimately acquired.

Naturally, we wanted examples of the principal devices he used as a writer. As someone who never learned to type, Brown’s prolific output was enabled by his quick mind and mastery of the art of dictation. Early in his career, he relied on assistants who took shorthand. Later, he used electronic recording equipment. We collected his Norelco NT II Dictaphone recorder, a highly portable machine on which he dictated five of his books published between 1999 and 2005. As a corollary, we also acquired his Norelco System 500 transcriber set, which his assistants operated from roughly 1980 to 2008, when the office turned to digital recording technology. 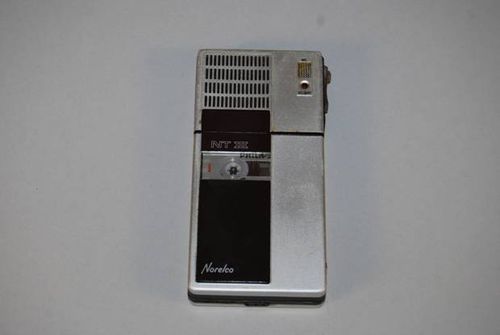 The pocket-sized, micro-cassette recorder used by Brown to dictate five books published between 1999 and 2005. 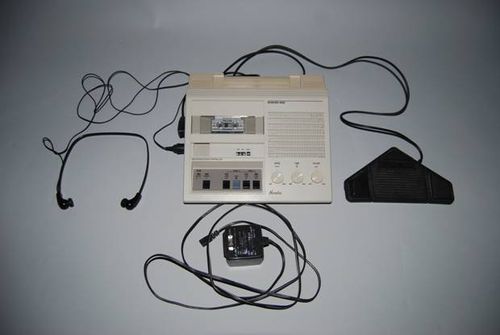 Brown enjoyed an international reputation as an engaging and persuasive speaker on environmental matters, and we sought to document that aspect of his work. Rather than writing out and then reading his presentations, he spoke from notes—a style of public speaking he learned in college. Prior to the late 1970s, Brown prepared his talk notes on index cards. Thereafter, he switched to letter-sized paper, with his notes running down two or three columns. The example below is from a highly provocative 1995 talk on China’s looming food crisis. 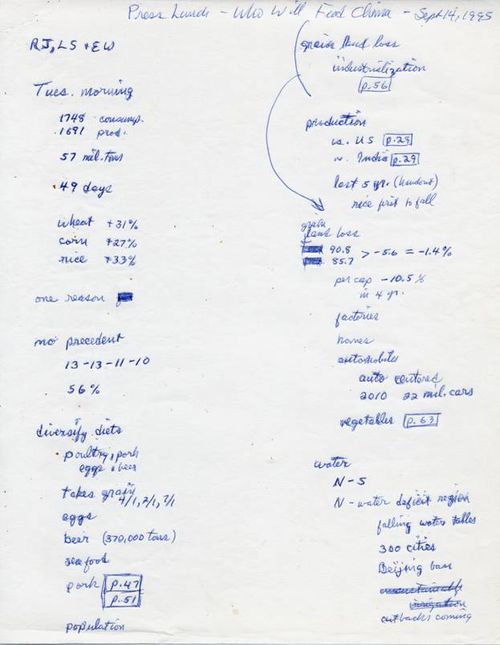 Brown’s handwritten notes for his September 14, 1995 presentation, “Who Will Feed China?”

As his longtime associate Kauffman told us, Brown simplified his life as much as possible “to save time and to conserve where he put his mental energies.” Even his clothing choices reflected this approach. He developed, for lack of a better word, a summer and winter “uniform,” both of which were accented (for formal appearances) with a clip-on bowtie, which became a distinctive part of his image. Kauffman made and repaired most of them, including the one pictured below, which she refashioned from a four-in-hand necktie given to Brown by Ted Turner in 1998, on the occasion of Turner’s establishment of the U.N. Foundation with a $1 billion gift. 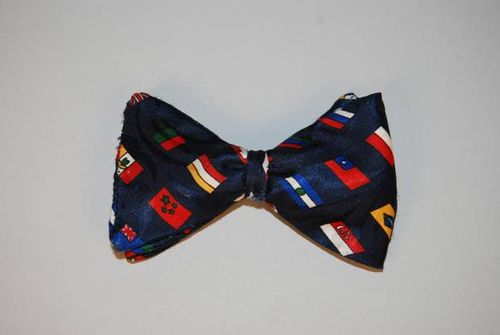 Brown wore this handmade bowtie on hundreds of occasions from roughly 1998 to 2010. The fabric showcases flags of several United Nations members.

The humbleness of these associative artifacts speak volumes about Lester Brown’s life. They are, however, no substitute for his writings. If you are not familiar with his body of work, you might want to begin by turning to his latest book, World on the Edge: How to Prevent Environmental and Economic Collapse.

Jeffrey K. Stine is Curator for environmental history at the National Museum of American History. He thanks Reah Janise Kauffman for providing invaluable contextual descriptions for all of the items acquired from Lester Brown.