What better place to become an official U.S. citizen than at an American history museum?

During a special naturalization ceremony, 20 individuals—including four members of the U.S. Armed Forces—raised their right hands and recited the Oath of Allegiance in unison, pledging their loyalty to the country in order to become full-fledged U.S. citizens. Held on Flag Day, the proceedings fittingly took place in the National Museum of American History’s Flag Hall, underneath a glittering, mirrored polycarbonate flag and in front of the exhibition housing the Star-Spangled Banner, the flag that inspired Francis Scott Key to pen the national anthem nearly two centuries ago. 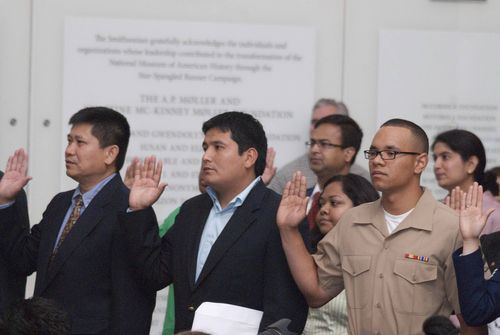 Candidates for citizenship raise their right hands as they recite the Oath of Allegience. 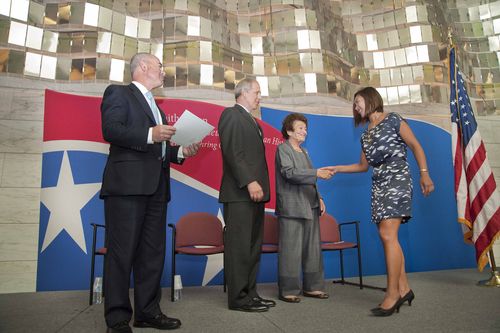 A newly minted citizen crosses the stage to receive her certificate.

“We’re holding this ceremony in our public square. This is the place in the museum where the civic life of our museum takes place, where we connect our visitors with information and ideas and with each other,” said Director Brent D. Glass in his opening remarks, encouraging visitors to explore the flag exhibit after the event. 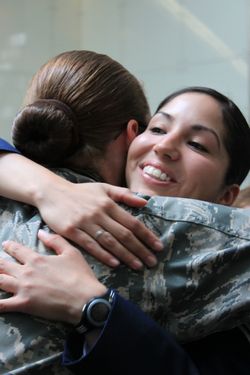 A new citizen is congratulated.

The Stars and Stripes figured importantly throughout the ceremony, serving as a symbol of the nation’s values around which the ceremony participants could unite—not in spite of, but by virtue of, their diversity and their unique paths toward citizenship. The newly minted citizens hailed from twelve different countries: Argentina, Bangladesh, China, Columbia, El Salvador, India, Jamaica, Mexico, Micronesia, Germany, Peru, and the Philippines.

Upon administering the Oath of Allegiance, Alejandro Mayorkas, director of U.S. Citizenship and Immigration Services (USCIS), hearkened the flag as a more sober reminder of the responsibilities that accompany citizenship: “As we raise the flag, we raise the hopes and dreams of people not only all over this country, but all over this world,” he said. “It speaks of the rights and responsibilities of United States citizenship—a privilege that you have earned today.”

Also in attendance at the ceremony was a group of more than 150 middle school students from all across the nation who participated in a joint program of Citizenship Counts and the Close Up Foundation that seeks to empower American youth to become engaged and responsible citizens in their communities. The students cheered loudly when one of their own, Paige Hawkins, took to the podium to lead the crowd in singing “The Star-Spangled Banner,” whose melodic strands gradually grew in force as more people joined in, even passersby viewing the ceremony from the floor above. 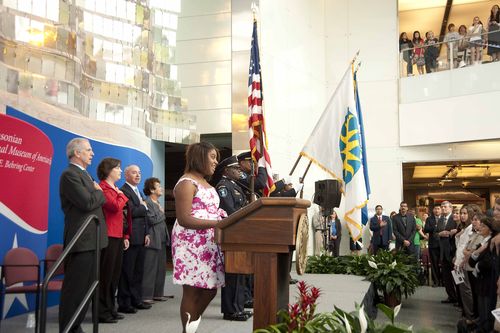 In an interview before the ceremony, Mayorkas was asked to identify his favorite part of being an American citizen, to which he briefly paused for thought before giving a straightforward answer: “Raising my children in this country, and having them understand and appreciate what a privilege that is.” He continued, “I share with them the stories of people we encounter in our work at U.S. Citizenship and Immigration Services, so my children, however young they are . . . understand what it means to come to this country and hope to have not only the ability to realize dreams, but to have the basic rights of freedom of expression and safety.” 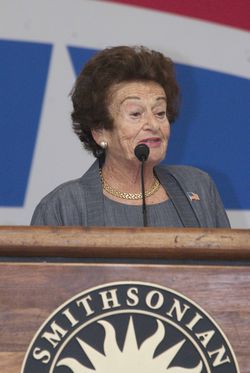 Gerda Weissmann Klein at the podium.

The keynote address at Tuesday’s ceremony was delivered by Holocaust survivor Gerda Weissmann Klein, the founder of Citizenship Counts and a humanitarian celebrated for her advocacy on behalf of tolerance, community service, and responsible citizenry. Klein, 87, shared the story of her path toward American citizenship, underscoring the importance of personal strength in the most trying of times, and the power of humanity and compassion.

In 1942, Klein, just a teenager, was separated from her Poland-based family and sent to various concentration camps, even making a 350-mile death march with 4,000 women in 1945. That same year, the young woman—weighing only 68 pounds at the time—was liberated by Kurt Klein, a U.S. Army intelligence officer whose kind actions would “restore me to humanity again,” she said. The pair eventually married and moved to America, where Gerda Weissmann Klein became a naturalized citizen. Klein, the recipient of the 2010 Presidential Medal of Freedom, has gained international recognition for public service and humanitarian work. At the ceremony, Klein said that the United States has given her gifts that she could have never imagined in her “wildest dreams.” 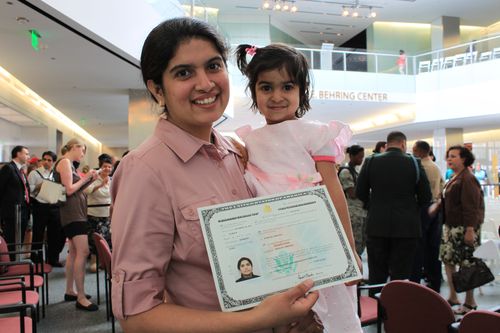 A ceremony participant shows off her new certificate of citizenship.

Esther I. Yi is a Fellow in the New Media Department at the National Museum for American History.