When you work in a room with over 10,000 firearms and weapons every day, people will inevitably ask, "Which is your favorite gun?" It’s hard to pick out a single favorite when there are so many to choose from—the answer might depend on a project I’ve been working on, a book I’ve been reading, a movie I’ve recently seen, or even music I’ve been listening to.

But I can say with certainty that one of the coolest guns we have in the museum’s collection was designed in 1935 but won’t be issued for another 400 years. It may have appeared on the cover of the Foo Fighters’ debut album in 1995, but it won’t really exist until the year 2419. 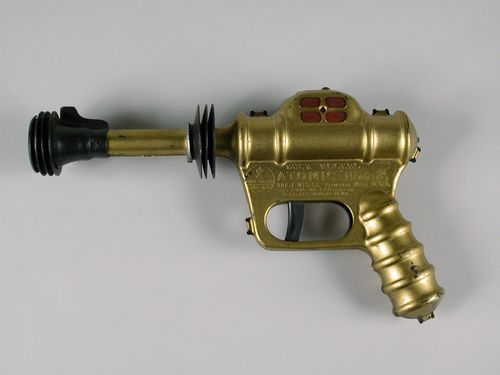 That’s right—before Captain Kirk, Han Solo, or Buzz Lightyear, there was Buck Rogers in the 25th century. His weapon—prettier than the Phaser, more refined than the E-11 Blaster, cooler than whatever Buzz Lightyear uses—was the U-235 Atomic Pistol. The gun has a fluted barrel, flamboyant fins, and a gold finish; sparks light up the red "Fission Control Chamber."

Buck Rogers first appeared in 1928 in the science fiction magazine Amazing Stories. The next year, he debuted in the first science fiction newspaper comic strip, which was published until 1967. Buck’s influence was widespread: he spawned his own radio show from 1932 to 1947, a short film screened at the 1933-34 Chicago World’s Fair, and even a 12-part movie serial produced in 1939.

The fictional character’s increasing popularity led to advertising premiums and merchandising, such as the U-235 Atomic Pistol that we now have in our collections. The toy came to the museum in 1978 as part of a large gift from the Daisy Manufacturing Company (the one that produced the infamous "Red Ryder Carbine-Action, Two-Hundred-Shot Range Model Air Rifle with a compass in the stock and a thing which tells time"). 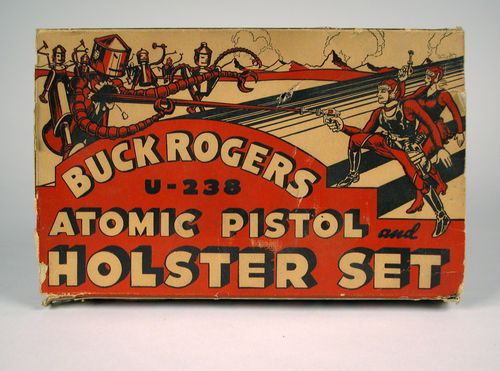 The box that holds the U-235 Atomic Pistol.

Back in 1934, Daisy had hit a home run by producing the first Buck Rogers metal toy ray gun, the XZ-31 Rocket Pistol. The next year, Daisy introduced another huge success: the XZ-38 Disintegrator Pistol, a ray gun with a new art-deco design.

When World War II came along, manufacturers did not use metals for toy production, and Daisy followed suit by producing 37mm artillery ammunition for the war effort and creating wooden pop guns for the home front. After the war, Daisy banked on the public’s fascination with atomic energy and reintroduced the XZ-38 as the U-235 Atomic Pistol. It had come a long way since the first Buck Rogers ray guns that were cardboard cut-outs printed on the back of breakfast cereal boxes.

Along with the U-235, Daisy’s gift to the museum includes BB gun models named after real and fictional people, such as Buzz Barton and Red Ryder. The gift also features two WWII-era wooden pop guns (some days, these are my favorites) and several other pop gun models.

David Miller is Associate Curator in the Division of Armed Forces History at the National Museum of American History.