What do Julia Child's spatulas say about preservation?

Editor’s Note: Today’s post is the fifth in a series of six about the museum’s work in Julia Child’s kitchen. Lauren Anderson is a Museum Studies graduate student at The George Washington University. 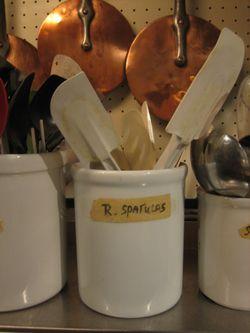 While working on the Julia Child exhibit, I was charged with assessing the status of the objects around the kitchen’s stove area. The job proved challenging at times because Julia kept a vast array of gadgets and cooking tools handy near her stove. I had to carefully extract every spoon, pot, and strainer, looking closely for any signs of deterioration—a daunting task.

When pulling out items from the crock labeled “Spoonery,” I noticed a sticky orange substance on one of the metal spoons. This struck me as unusual, since the metal did not appear to be deteriorating in any other way. But when I began examining the contents of the adjacent crock labeled “R. Spatulas,” it grew apparent that the inhabiting spatulas were the source of the problem. The spatulas, which are most likely composed of a rubbery silicone (the “R” on the crock stands for “rubber”), felt tacky and were releasing the same substance that I had found on the metal spoon—signs of deterioration of plastics. Some of the substance had simply transferred onto the spoons upon contact.

Unfortunately, this can be common when one works with plastic artifacts. All objects deteriorate over time, but some materials are more susceptible than others. Such materials are said to have “inherent vice,” meaning that the elements of their chemical composition can eventually cause their own deterioration. When plastics deteriorate, they can display a number of symptoms, including tackiness, distortion and discoloration, and “weeping,” which is when liquid seeps out of deteriorating plastic. While museums can carefully manage potentially harmful external factors such as UV light or fluctuations in relative humidity that can negatively affect all artifacts, deterioration stemming from inherent vice usually cannot be stopped entirely, only monitored. 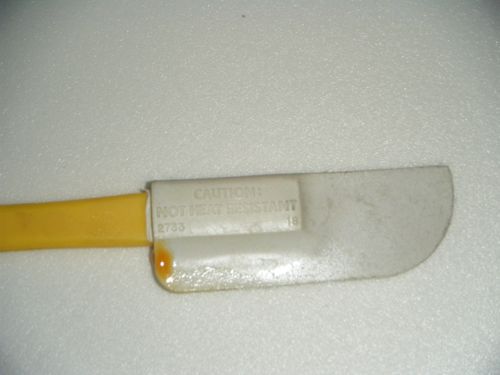 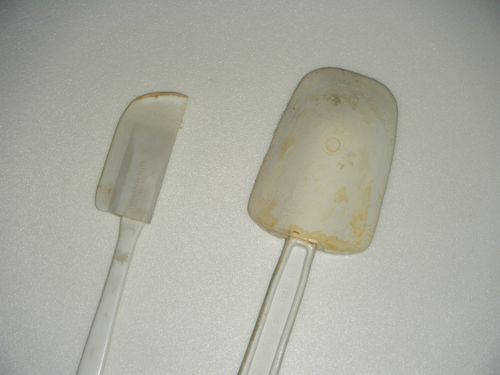 Examples of rubber spatulas from Julia Child's kitchen that show signs of deterioration.

While the problem of deterioration may seem like a harsh reality, it raises interesting questions about the presence of modern materials in museums and helps to stimulate further research into how museums can best protect artifacts like rubber spatulas. Most people are familiar with the more ephemeral nature of some common household items; with use and time, an inexpensive spatula in an average kitchen can have a finite lifetime. When it comes to preserving Julia’s workspace, I've learned that it is important to remember that what may seem like mundane plastic spatulas played an integral role in the very same kitchen that held her famed copper pots—and, in consequence, played a significant part in her legacy as well, a legacy that the museum strives to preserve.

The deterioration of modern materials like plastic should not serve as a deterrent, but inspiration for us to continue monitoring these vulnerable objects to ensure a longer lifetime for Julia’s kitchen—"R. Spatulas" and all.

Lauren Anderson is a Museum Studies graduate student at The George Washington University.