Editor’s note: Today’s post is the third in a series of six about the museum’s work in Julia Child’s kitchen. Christine Klepper is a Museum Studies graduate student at The George Washington University.

When walking into Julia Child’s kitchen for the first time, you realize how functional the kitchen layout is. Julia and her husband Paul’s private and professional life coexist in perfect balance within the space, giving the room an organized but homey feel. One of my first impressions after I started working in the kitchen was how Julia’s bookshelf was a great example of this balance. It featured copies of her own publications, books belonging to Paul, and general interest readings unrelated to cooking.

My assignment in the kitchen was to complete object condition reports on all 27 books on the kitchen bookshelf. My goal was to assess each book’s current condition, compare my observations with previous records, and, if its condition required, bring the book to the attention of a museum conservator. The bookshelf was located between Julia’s refrigerator and a glass view portal designed so visitors can see into the kitchen. I handled the object by the front and back cover to avoid pulling the book’s spine, preventing damage to dust jackets and spines when removing the books from their shelves.

I remember being very excited to have the opportunity to look at Julia’s cookbooks. All her cookbooks were labeled “Kitchen Copy,” suggesting that Julia kept other copies throughout the house. I expected the cookbooks to show signs of use such as food particle stains or penciled-in changes to recipes. I was surprised to find Julia did not make any changes to the recipes in any of her cookbooks that I surveyed. I did however find charming dedication inscriptions in cookbooks written by other master chefs to both Paul and Julia. 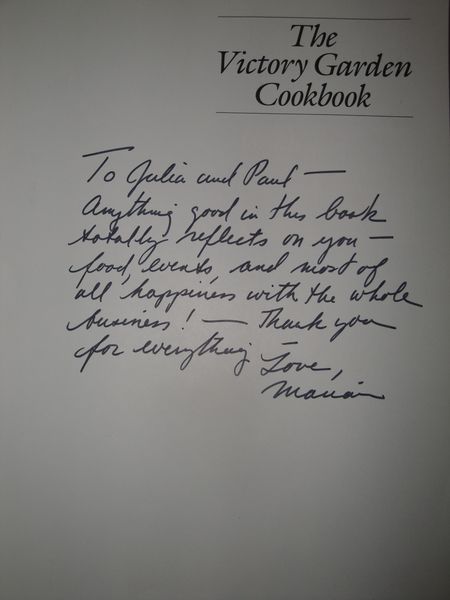 Dedication inscription to Julia and Paul from Marian Morash, author of The Victory Garden Cookbook

There were more than just cookbooks on Julia’s bookshelf. Some unexpected titles included Massachusetts State Government: A Citizen Handbook, The League of Woman Voters of Massachusetts, Bulfinch’s Mythology, and An Encyclopedia of World History. A 1929 student edition of Gasc’s French Dictionary suggests that Julia’s college textbooks were also scattered throughout the bookshelf. On the inside cover the dictionary is signed with Julia’s maiden name “Julia McWilliams.” Because her name is under a crossed-out name of another female, it is possible that Julia purchased this used textbook the year she enetered Smith College in 1930. At a later date, after marrying Paul, Julia crossed out her own name and wrote “Child” beneath it. 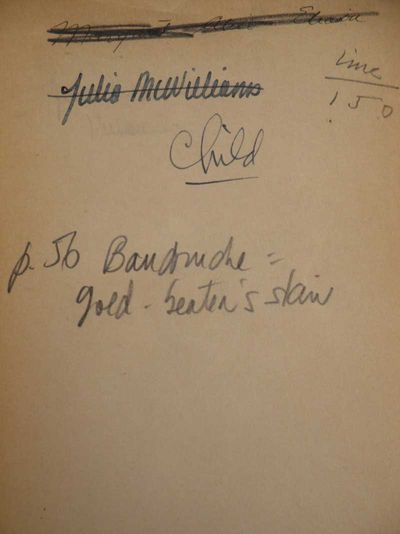 The most memorable experience I had while working on the bookshelf happened when I began to inspect Julia’s copy of A Field Guide to Birds East of the Rockies by Roger Tory Peterson. I noticed she had bookmarked two pages, and I assumed that she was making note of birds that she observed outside her kitchen windows. When I turned to the marked page to note its location for the book’s object record, I realized Julia did not use the book for bird watching. She had bookmarked the description for pheasant and quail or, as curator Rayna Green observed, “the yummy birds.”

I learned something new every day while working in Julia’s kitchen. The best surprises were when I found Julia’s handwritten notes tucked between pages in some of the books. In Alexis Lichine’s Guide to the Wines and Vineyards of France, Julia hand-copied French bottle sizes and cooperage for Champagne from the book’s glossary. I admire that Julia was constantly learning and honing her craft. From my experience working in Julia Child’s kitchen she inspired me to do the same. 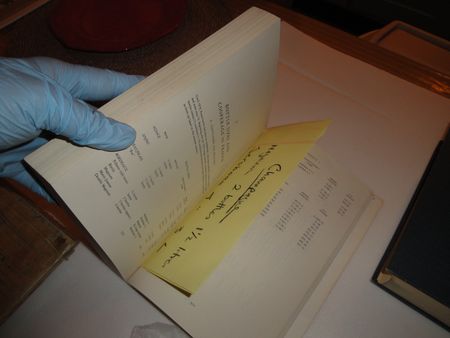 Christine Klepper is a Museum Studies graduate student at The George Washington University.