Speaking out about HIV/AIDS, one button at a time

Editor's Note: This is the fifth post in a series exploring the 30th anniversary of HIV and AIDS. Beginning last June 3, the National Museum of American History has been marking the anniversary of the emergence of the HIV and AIDS epidemic with a three-part display and companion website. This blog series provides additional context through the perspectives of people directly involved in the history the museum is documenting. 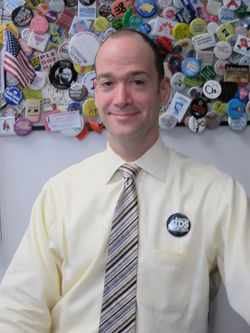 Miguel Gomez, wearing the AIDS vigil button, stands before his board of buttons.

Miguel Gomez is the director of AIDS.gov, a program of the Office of HIV/AIDS Policy, U.S. Department of Health and Human Services, that works to increase HIV testing and care among people most at risk for, or living with, the disease. In his office in Washington, D.C., Gomez has a bulletin board showcasing an amazing collection of buttons from projects and events related to the HIV and AIDS epidemic. Buttons are an efficient means for documenting history because they distill complex messages into concise language and graphics, and capture diverse points of view (the National Museum of American History has over 33,000 pin-backs in its collection). We asked Gomez to elaborate on his button collection—and here's what he had to say.

If inanimate objects could speak, the buttons on the bulletin board in my office would tell many stories. Each button has only a few words or a single image to "speak" to those who stop to take a look. But, if you care to listen, these small pieces of metal and plastic tell tales of nearly unbearable sorrow—as well as stories of courage and hope.

Buttons used to do what Twitter does now: share with the world, in a very few characters, an important message about the person who displays or wears them. You might call them low-tech "micro-tweets."

I have collected buttons since I was a child. I think I got my first one at the Detroit Auto Show in 1970; it featured an image of the brand-new AMC Gremlin. Over the years, I collected others. I still have one from my first trip to Washington, D.C. for a march. But the bulk of my collection is made up of the buttons I have collected over the 30 years of the HIV and AIDS epidemic.

I have over 500 buttons, and all of them are meaningful in some way or another—but the one that memorializes an early AIDS vigil is my favorite. The button is black with white lettering. It says "National AIDS Vigil, October 8, 1983" and shows a hand holding a candle, which makes up the "I" in "AIDS." 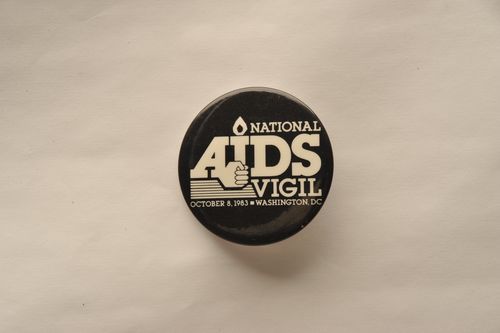 At that time, we still didn't know what caused AIDS. It would be another year before HIV was identified as the cause of so much suffering and death, and many more years before treatments were available. All we knew then was that people we loved and cared for—friends, family members, co-workers—were dying.

Soon after that vigil took place, I came to Washington, D.C. to begin working at an organization that advocated for Latino issues, but they didn't want to address the issue of HIV and AIDS then. The stigma was too great. I am convinced that stigma kept us from responding quickly enough to the epidemic—and caused untold losses that might have been prevented.

The button encapsulates that history for me. It continues to be a stark reminder of how much HIV and AIDS has cost us. When I look at it, memories of the friends and colleagues I have lost to AIDS come flooding in—and I am reminded that approximately 18,000 people still die of the disease in the United States each year. 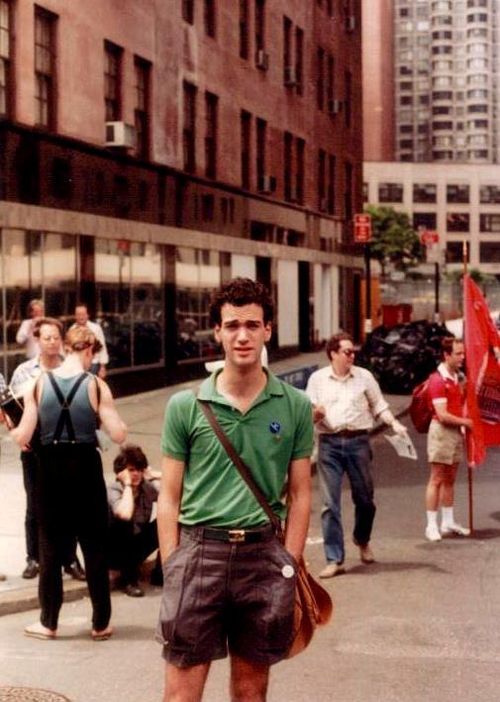 That button continues to inspire me in my work at AIDS.gov every day.

Other buttons remind me of events that have been important in the history of HIV and AIDS in the United States and the world. There are buttons from ACT UP rallies, which pushed the U.S. government to respond more rapidly and effectively to the epidemic here at home. There are buttons from multiple International AIDS Conferences, where I have met with thousands of people from around the globe who are responding to HIV and AIDS or living with the infection.

The buttons are of different colors, shapes, and sizes. They reflect multiple languages, perspectives, and goals.

But they share one, overarching message: we must respond to the HIV and AIDS epidemic, and we must do so in ways that honor those we have lost and protect those who are living with the disease now.

A button may not reach as many people as a tweet—but I would say it performs pretty effective "messaging" for something that can fit in the palm of your hand.