As longtime players in the entertainment business and the two masterminds behind the critically acclaimed television series Rescue Me, Denis Leary and Peter Tolan are no strangers to accolades and honors. Here's a taste: the pair earned an Emmy nomination for co-writing Rescue Me, in addition to individual nominations—Leary for his portrayal of a dyspeptic New York City firefighter, and Tolan for his directing. During a special ceremony last week at the National Museum of American History, however, Leary and Tolan found themselves giving—instead of getting—in honor of their work. 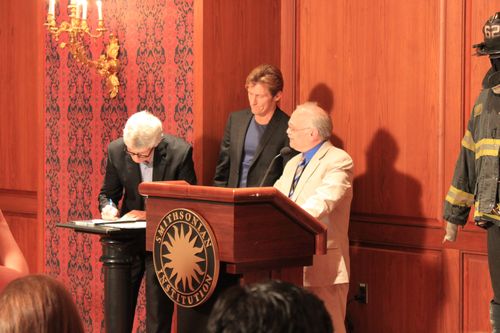 Peter Tolan (left) and Denis Leary (center) sign the deed of gift at a special ceremony in the museum last week.

The co-creators of Rescue Me stood before the gathered guests to sign the deed of gift officially transferring to the museum objects from the set of the show: the firefighter costume worn by Leary, firefighter helmets worn by the cast, photographs from the firehouse set, and firefighting tools, including an axe, a carbon monoxide detector, and Halligan bars. (Before signing the documents, Leary needed some reassurance: "This is just donating stuff, not my kidneys, right?" he asked.) 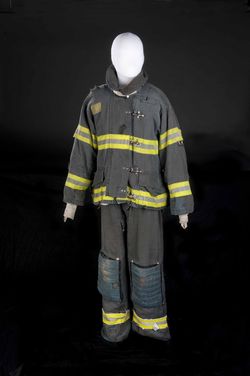 "I do find that the greatest honors are the ones that are the most unexpected and the ones that come without any cash gift or an actual award, or even a small certificate—which, apparently, isn't going to happen either," Tolan said in jest. "This is a great honor to us, and it really did turn my head. I'm actually a little speechless—other than the jokes."

Rescue Me, which premiered in July 2004 and will close its seven-season run this September, follows the personal and professional lives of a group of New York City firefighters working in Ladder 62 / Engine 99. The show is notable for its melding of drama and comedy, a combination that Leary said reflected the experiences of real firefighters who use humor to help overcome the turbulent emotions that attend the job. The focus of the show is the tortured Tommy Gavin (played by Leary), a veteran firefighter haunted by the loss of his cousin, who died while responding to the September 11, 2001 attacks. 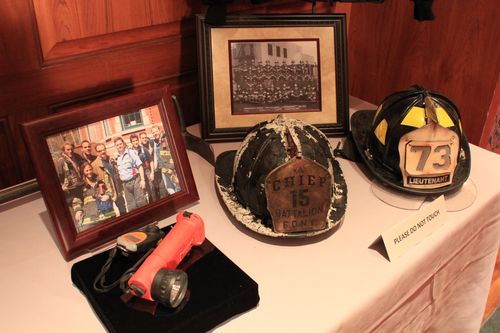 Photos, firefighter helmets, and firefighting tools on display at the ceremony. 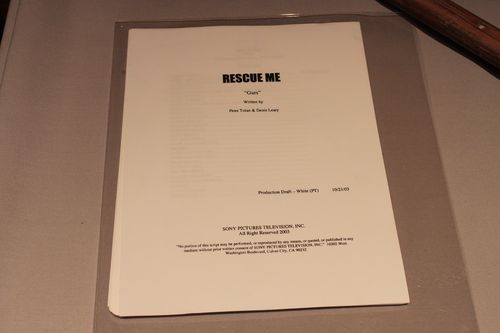 Script from the Rescue Me set on display at the ceremony.

In December 2001, Congress officially designated our museum as the national repository for collections related to September 11. Over the years, the collecting efforts have expanded from the attacks and recovery endeavors, to the nation's response to the events—even if that means the creation of a fictional television series. The Rescue Me acquisitions, which will join the popular culture history collections in the Division of Culture and Arts, represent the pivotal role played by popular culture in remembering and shaping the country's most significant moments.

"Some people raise flags, others made banners, still more sent cards and volunteered their services to the public," said Cedric Yeh, the Deputy Chair and Associate Chair of the Division of Armed Forces History, about the aftermath of September 11. "Denis and Peter chose to create a TV series, one that is consistently recognized for its accurate portrayal of a post-9/11 world amongst the firefighters of New York City." 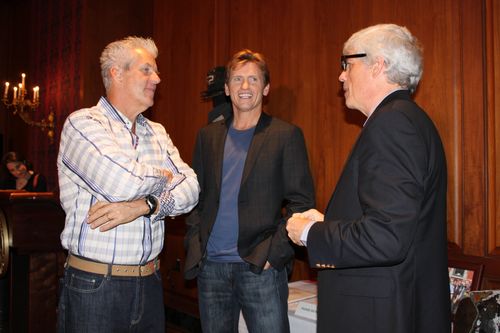 Lenny Clarke (left), an actor on Rescue Me, Denis Leary (center), and Peter Tolan (right) after the ceremony.

After facing the loss of his cousin and friend in a fire, Leary created the Leary Firefighters Foundation in 2000 to provide fire departments with funding and resources. His close involvement with fire departments in the Worcester, Boston, and New York City areas led to the development of Rescue Me. During last week's ceremony, Leary came to the podium and used the opportunity to recognize, by name, the individual firefighters that he has met and worked with over the years. "I like to mention firefighters because this show is about them," he said. "When people walk into this museum and they see this bunker gear, especially kids, I hope that it reminds them of how great these guys are and what they do."

The museum will be marking the 10th anniversary of September 11 with a series of events and a special display, September 11: Remembrance and Reflection, on view from September 3 to 11, daily from 11 a.m. to 3 p.m.