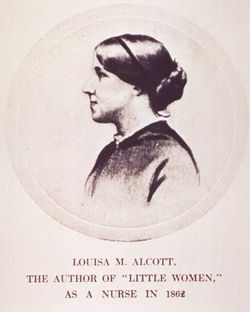 Louisa May Alcott. Courtesy of National Library of Medicine.

“As no two persons see the same thing with the same eyes, my view of hospital life must be taken through my glass, and held for what it is worth.” – Louisa May Alcott, Hospital Sketches

Before performing preliminary research on Civil War-era nursing for the National Library of Medicine’s joint exhibition with the National Museum of American History, I knew little about the hard-working and dedicated women who served in overcrowded hospitals and on war-torn battlefields. Of all the women I read about, the only name that seemed familiar to me was Clara Barton, founder of the American Red Cross. It was not until I read the diary of Amanda Akin, the subject of the aforementioned exhibit, that another name caught my attention: Louisa May Alcott. 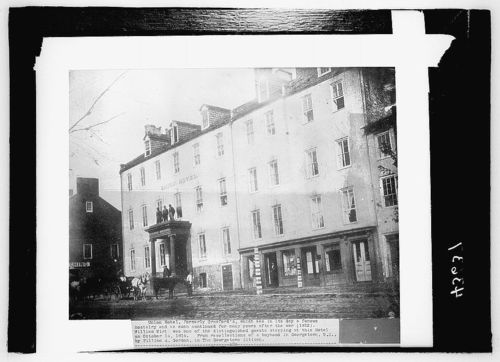 While Alcott is perhaps best known as the author of the 19th-century classic Little Women, she also served as a Union nurse in Washington, D.C. at Georgetown’s Union Hotel Hospital from December 13, 1862 to January 21, 1863. Though Alcott’s term of service was cut short after she contracted typhoid pneumonia, she used her brief wartime experience as a basis for her second published book, Hospital Sketches. Yet unlike many Civil War nurses who waited until after the war to publish their memoirs, Alcott’s appeared in print in 1863 before the war’s end, allowing fellow nurses such as Amanda Akin to read passages from the book to their patients. In The Lady Nurse of Ward E, Akin wrote in an entry labeled December 1863 that she “read aloud a chapter from Miss Alcott’s “Hospital Sketches,” which seemed to entertain a number very much, particularly my sensible John . . . who said he did not see where such an interesting book came from.” 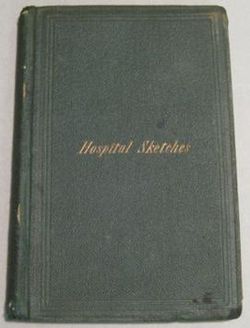 Hospital Sketches, though partially fictionalized, offers an interesting perspective into the life of a Civil War nurse, especially when compared to Akin’s memoir—and not simply because the two women served for different lengths of time (Alcott for two months, Akin for fifteen). They both served in Washington, D.C., but in two completely different hospital settings. The three-story Union Hotel Hospital in which Alcott performed her duties, for example, had poor ventilation, damp cellars, and no provisions for bathing; conversely, the ten, single-story wards composing the Armory Square Hospital where Akin labored not only allowed for light and air, but also facilitated the containment of infectious disease.

When Alcott visited Armory Square during her stay in Washington, she could not help but compare the well-maintained and well-managed hospital residing on the National Mall to her own, which she refers to as the “Hurly burly Hotel” in her work: “Here [at Armory Square], order, method, common sense and liberality reigned and ruled, in a style that did one’s heart good to see; at the Hurly burly Hotel, disorder, discomfort, bad management, and no visible head, reduced things to a condition which I despair of describing.” 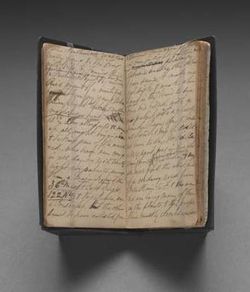 One of Amanda Akin’s personal diaries. Courtesy of National Library of Medicine.

Like Akin’s diary, Alcott’s account provides us with a fascinating, personalized portrayal of what it meant to be a female nurse in a world in which male physicians were still unaccustomed to and uncomfortable with working alongside women. For this reason and many others, both texts prove to be incredibly valuable resources for scholars and the public alike. At the History of Medicine Division of the National Library of Medicine, visitors are welcome to explore a first edition of Louisa May Alcott’s Hospital Sketches as well as one of Amanda Akin’s personal diaries (currently on display at the National Museum of American History until July 29, 2011).

Kevin Konrad is a graduate from the Richard Stockton College of New Jersey and an exhibition researcher.