Shortcuts across time and space

Chromolithograph, from about 1893, of Columbus bidding farewell to the queen of Spain on his departure for the New World in 1492. Courtesy of Library of Congress.

With the rising cost of fuel and the impossible demands on our time these days, we are constantly looking for shortcuts. That puts us in the company of history's most famous seeker of shortcuts, Christopher Columbus, who sailed west to reap the bounties of Asia. Key to his audacious plan to reach the "Indies" was the spherical shape of Earth, which, contrary to insidious schoolbook myth, almost everyone at the time accepted (some 350 years after Columbus, belief in a flat Earth began to resurface, as seen in the 1884 foundation of the United Zetetic Society, antecedent of today's Flat Earth Society). Had Columbus not seriously underestimated Earth's size, he might have made it to his true destination. Instead, his accidental landfall on the present San Salvador Island (now part of the Bahamas) introduced his fellow Old Worlders to the wonders of what they called the New World. The Genoese explorer's serendipitous encounter fed an ever-growing fad for discovery—and an ever-growing need to know where you were headed.

The National Museum of American History and the National Air and Space Museum are jointly developing the exhibition Time and Navigation: The Untold Story of Getting from Here to There, which will feature navigation instruments from clocks used in 17th-century seafaring to the latest Global Positioning System (GPS). Though Columbus had only a limited acquaintance with celestial navigation, celestial is what it's all about in the modern age of space exploration, the newest and most outrageous frontier. I am as concerned as any of my fellow earthlings about where we go post-Apollo and after the impending demise of the space shuttle. Though there is talk of traveling to Mars and even the moon again, I have yet to hear a definitive plan from NASA or anyone else. 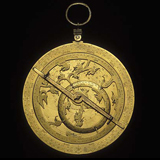 An astrolabe, from about 1450, designed for an observer standing at the latitude of London. It has 25 star pointers shaped like heads of dogs, with a grid of lines below for setting star positions.

In the meantime, why think so small? Far more exotic worlds beckon: new planets, star systems, galaxies, and even parallel universes. And it's not just science fiction writers who are thinking this way. Intergalactic space and time travel has also become a fashionable topic among some very respectable scientific thinkers, including Stephen Hawking, Brian Greene, and Michio Kaku. They admit this is the ultimate scientific and engineering challenge to navigation. Without shortcuts, you can't even think of trying "to boldly go where no man has gone before," as Star Trek intoned. Even allowing for the discovery of a revolutionary form of rocket propulsion, there is the absolute ban on exceeding the velocity of light—a speed limit policed by none other than Albert Einstein with his theory of relativity—which one must do to traverse cosmic distances in anything less than a ridiculous amount of time.

Yet it was Einstein who also suggested some theoretical loopholes—what are now called wormholes, those tunnels between two points in space-time (also made popular by Star Trek)—based on the curvature of space-time posited in his general theory of relativity. In 1935, with his student Nathan Rosen, he explored warps in the fabric of space-time that offered possible shortcuts. The Einstein-Rosen bridge shortcut involves black holes. As Kaku explains it, "At the center of a black hole, there is a 'throat' that connects space-time to another universe or another point in our universe." That's the magical shortcut. But, how do you navigate a wormhole? According to Einstein and Rosen, you can't, because it closes fatally before you and your spaceship can squeeze through. 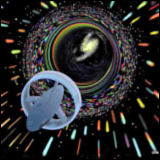 There the matter stood for quite a while, until in 1988 physicist Kip Thorne and colleagues at CalTech found a solution to Einstein's equations that kept the portal open long enough to allow safe passage. Ordinary matter and energy, according to relativity theory, give space a positive curvature, like the surface of a sphere. While that was a useful shape for Columbus, it is a problem for navigating wormholes, posing an impenetrable "singularity" (a point where space-time curvature becomes infinite). Thorne and his team introduced the idea of an extremely rare form of matter with "negative energy density," which they theorized curved space in the opposite direction and thus kept the wormhole open for traversing not only our universe, but between ours and other universes. "Negative energy" seems to exist theoretically, although it is exceptionally hard to obtain, even in the minutest quantities.

Long a skeptic of such things, Stephen Hawking has lately come around to giving the concept of navigating wormholes his tentative blessing, though he still insists that time travel can only go in one direction, toward the future and not the past. More precisely, his position is that it is "theoretically possible," which of course is not at all the same as saying you can actually do it.

I confess to being utterly fascinated by the fascination that physicists like Hawking and Thorne have with cosmic and intercosmic travel. But what does it all mean? The imagination should soar; yet at the same time I appreciate the dose of reality in Kaku's statement that "While Thorne's time machine seems theoretically possible, [it is] exceedingly difficult to build from an engineering viewpoint." A magnificent understatement, to say the least. Then again, if Columbus didn't have a dream (or had had his global dimensions right), would he ever have dared to venture forth?

Art Molella is Jerome and Dorothy Lemelson Director of the Lemelson Center for the Study of Invention and Innovation at the National Museum of American History. This column originally appeared in June 2011 issue of Prototype, the Lemelson Center’s newsletter.