A closer look at a Civil War watch

My colleague Diane Wendt’s excellent work on a Civil War nurse reminded me that the museum has a closely related object—a Civil War surgeon’s pocket watch. More than two decades ago, I had collected the watch to document a critical technical episode in the early history of the American watch industry. Recently I pulled the watch out of storage for a closer look. It was as though I was seeing the watch for the first time, with a heightened appreciation for its Civil War roots. 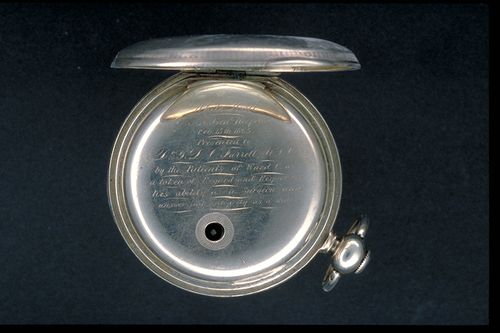 The inscription tells the story of the watch

The watch’s most distinguishing feature is an interior inscription. On the dust cap that covers the movement, the engraving reads: “White Hall USA Gen’l Hospital, Feb. 15, 1865 Presented to Dr. G. D. O’Farrell, USA, by the patients of Ward C as a token of regard & respect for his ability as a surgeon and unswerving integrity as a man.”

A little digging over the past few days (ok, a little web surfing) allowed me to sketch an outline of the life of the surgeon who received this gift. Gerald Dunne O’Farrell was born in Ireland in 1836 and had medical training at the University of Pennsylvania, class of ’62. From March of 1863 through the end of July 1865, he served as assistant surgeon with the 63rd and 215th Pennsylvania Regiments. He settled after the war in the Kensington neighborhood of Philadelphia, married Eliza M. Broffy—also from Ireland—in 1866, and together they had a son G. D. O’Farrell Jr., another Penn graduate, class of ’94. A physician to the end, the senior O’Farrell died on a house call on March 27, 1902. 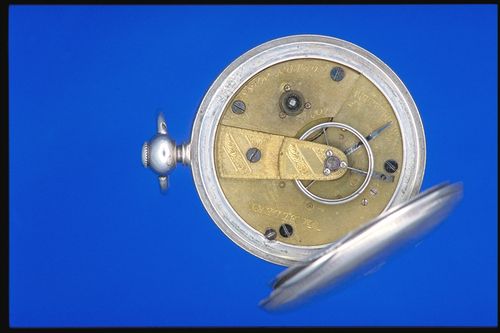 The interior mechanics of the watch on display

The hospital named in the inscription—White Hall U.S. Army General Hospital—is a little harder to pin down. There were, it seems, two civil war hospitals in Pennsylvania called White Hall or Whitehall, one near Bristol and the other near Williamsport. Bristol’s White Hall, a grand Greek Revival building on the National Register of Historic Places, was once the home of Bristol College and served after the war as a school for the orphans of African American soldiers.

But none of these spare facts tells us what it was like to be a young surgeon, straight from school, thrust into the horrific fray of the American Civil War. Other wartime physicians have left their reminiscences, published or otherwise, but not O’Farrell. I can’t tell you what demonstrations of surgical skill his patients observed or what acts of “unswerving integrity” prompted their gift. I wonder what kind of man O’Farrell was. Who were his Ward C patients? What were their injuries? Their fates?

The watch offers no clues about any of these, but it does tell us other things. The silver watch case shows signs of wear, an indicator that Dr. O’Farrell wore it and consulted it, perhaps to measure a patient's pulse or catch a train on time. The watch movement—the part of the watch that ticks—is well cared for, a sign of a valued possession. The movement, marked “Wm. Ellery/Boston, Mass.” tells us that the watch is a product of the American Watch Company of Waltham, Massachusetts. And this relationship with Waltham is why I collected the watch in the first place. 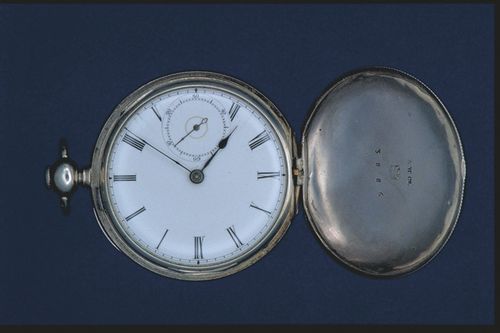 The watch shows signs of wear

In the 1850s, watchmakers at what would become the American Watch Co.developed the world’s first machine-made watches. The firm’s early years were financially unsteady and success finally came from an unexpected quarter. During the Civil War, the Waltham factory designed and produced the low-cost William Ellery model, like the one Dr. O’Farrell got. Selling for an unbelievable $13, these watches became a fad with Union soldiers. Roving merchants sold thousands of cheap watches to eager customers in wartime encampments. By 1865, the year the war ended, William Ellery movements represented about 45% of Waltham’s unit sales.

To make something as tiny and complicated as a watch by machine had seemed impossible in 1850, but a decade later American watchmakers had an industry that produced quality watches in quantity, an industry that would come to symbolize the best of American know-how and organization on the world stage.

The Civil War placed the United States on the world stage in the 19th century. And these days, the international context of that war that has attracted a lot of fresh historical scholarship. Timed with this anniversary year of the war’s beginnings, new research is offering a closer look at a bigger picture than our watch affords. A great place to start my summer reading!

Carlene Stephens is a curator of the Division of Work and Industry at the National Museum of American History.