Editor’s note: This post is by Joan Brodsky Schur, an education consultant and participant in the August 3 opening panel discussion for September 11: Teaching Contemporary History, the museum’s online conference for K-12 educators about September 11.

In these beautiful summer days of August 2011 the last thing I want is to revisit the day of September 11, 2001, in New York City, where I still live. As the school year opens many teachers, wherever they live across the United States, may feel the way I do. But we need to go down the hole of one of history’s darkest days in order to come up with some light to shed on it for our students this September.

Here are a few suggestions I can make after considerable thought about teaching in the 10th year of our post-September 11 world. First, be clear about your goals. Memorializing is a way to express shared grief, to honor lost lives and those who tried to rescue them. By creating works of art, singing appropriate songs, and participating in public service activities, students of all ages can forge a renewed sense of community within their school and beyond. But after memorializing we must also teach history, especially to secondary students who can begin to contextualize it. 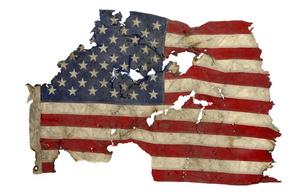 A damaged American flag found by a recovery worker in the World Trade Center debris at the Staten Island recovery site.

Teachers justifiably wonder about finding the time to teach about September 11. One way is look for those essential questions that can help us to compare aspects of September 11 to other events in American history as we teach them throughout the year. I have identified five essential questions, targeted toward secondary students, that will hopefully prove useful in this ongoing endeavor.

1. What accounts for the resiliency and spirit of volunteerism in the United States?
The American Revolution, Great Depression, and World War II come to mind. In New York City on September 11 governmental agencies at all levels responded to an unprecedented emergency; so did ordinary citizens. At Battery Park over half a million people were ferried to safety by fireboats, yacht cruises, sightseeing boats, and tugs. A similar event occurred on the night of August 29, 1776, during the Battle of Long Island. American forces, pinned down by the British in Brooklyn were ferried to safety in Manhattan by what David McCullough calls “a makeshift emergency armada assembled in a matter of hours.”

2. The United States government needs to protect the safety of its citizens while also protecting our civil liberties. What is the proper balance between the two?
The Alien and Sedition Acts of 1798, Lincoln’s suspension of habeas corpus during the Civil War, and the Espionage and Sabotage Acts passed by Congress during World War I can be compared to the USA PATRIOT Act, and the “detention centers” like Guantanamo Bay. Each of these efforts to protect citizens may have seemed justified in a moment of fear, but how is their constitutionality judged over time?

3. Under what circumstances is military intervention justified?
President Roosevelt’s War Message to Congress of December 8, 1941, can be compared to President Bush’s Address to Congress of September 20, 2001, and declaration of war against Iraq on March 20, 2003, in terms of how each one meets or does not meet the criteria used in “Just War Theory.” These criteria include just cause, right intention, proper authority, last resort, probability of success, and proportionality. (See a lesson plan I wrote on Franklin Roosevelt and Just War Theory.)

4. Once at war, how should the United States protect citizens who are at risk for reprisal?
These groups include the French during the French Revolution, Germans during World War I and II, and the Japanese, who were placed in internment camps during World War II. In the wake of September 11, Japanese Americans advocated for the need to protect the rights of Arab Americans and Muslim Americans. For resources on considering the experience of Japanese internees, visit the museum’s website A More Perfect Union: Japanese Americans and the United States Constitution

5. What should be the relationship of the United States to the international world order?
Over time Americans have both rejected and accepted membership in/adherence to the League of Nations following World War I, the Geneva Conventions—which in 1949 delineated the humane treatment of prisoners during wartime—the establishment of the United Nations after World War II. How does the Bush doctrine of “American Exceptionalism” following September 11 fit into this ongoing debate about the role of the United States in the world order?

Joan Brodsky Schur was a panelist for the Smithsonian’s online conferenceSeptember 11: Teaching Contemporary History. For more thoughts on the issues to consider when teaching about September 11, view the panel discussion The Past, Present, and Future of September 11