Editor’s Note: Don’t miss this video of museum technician Drew Robarge examining a mysterious pair of eyeglasses for clues about their origins. This history mystery is presented in American Sign Language (ASL).

When an inventory specialist working in the museum’s medicine collection announced that she had discovered a pair of Battlestar Galactica glasses, I—a huge science fiction fan who often likes to imagine that he defends the human race against the Cylons—quickly commandeered the glasses for a closer look.

The museum’s Medicine and Science collections hold approximately 1,000 historical eyeglasses that range widely in shape, size, color, and style, representing the vast diversity of methods of vision correction developed over the centuries. These objects allow historians to study not only the development of vision correction and its many forms, but also the cultural significance of the eyewear used. We’ve got everything from your standard nose-propped eyeglasses and lorgnettes(that is, spectacles with handles), to artificial eyes and modern-day contact lenses. But never did I think that we had Battlestar Galactica glasses.

At first glance, the brown glasses appeared rather uninteresting, but its intriguing elements began to shine in the little details. On the outside of each of the temples near the hinges, there lies a small rectangular, metal Battlestar Galactica logo plate. The words “Battlestar Galactica Universal Studios” are printed in white on the inside of the left temple. The lenses are non-prescription, and the glasses come with a red plastic case with a cloth-lined interior. 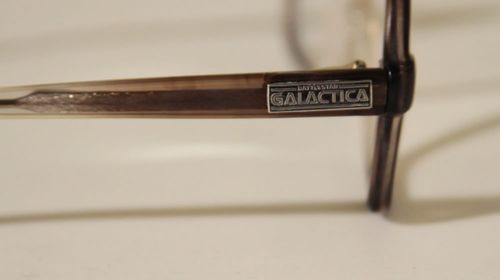 My encounter with the object brought to mind the peculiarity of owning a pair of glasses inscribed with something so specific. The glasses people wear are typically not accessories customized to show support for, say, a sports team, an organization, or a favorite television series. Glasses vary enough that they can reflect the wearer’s identity, but rarely do we view glasses as arenas for declaring one’s specific interests.

After closely examining the glasses, I hoped to gain more insight from the pair’s provenance (essentially the life history of an object, including its historical, social, and economic contexts). Using the catalog number marked on top of the bridge, I located the file that was created when the object was donated to the museum. According to the documents in the file, the object came to the museum as part of a 1982 donation from Dr. J. William Rosenthal that included 36 eyeglasses and 26 lenses considered modern at the time. The files had no details regarding the object’s original owner, or how Rosenthal—who had donated about 20 times to the museum’s medicine collection—had obtained the glasses in the first place.

I know for certain that the glasses have been in existence since 1982, but what is the earliest possible date at which the glasses could have been made? The world of Battlestar Galactica first premiered on television in 1978, and the American science fiction show documented the travails of an extraterrestrial human civilization warring with a cybernetic race. After one season, Battlestar Galactica was cancelled, a move loudly protested by loyal viewers. The show remained popular, and that same year, the Universal Studios Hollywood theme park in Los Angeles debuted a staged event for its studio tour entitled “Battle of Galactica,” which took visitors on a tram ride through a Cylon base as the crew of the Galactica fought against the evil Cylons. In 1980, Battlestar Galactica returned with six new episodes, and the show was reimagined with a different storyline from 2003 to 2009, attracting a new cadre of fans (including me). Given the year of the donation, the owner’s interest in Battlestar Galactica most likely concentrated on the earlier series.

A search for the glasses on eBay and other merchandise websites revealed no similar objects, which could mean that the glasses are rare. I thought that perhaps the glasses were a limited edition promotional item or merchandise purchased from the Universal Studios gift shop, but the latter hypothesis became harder to verify when Universal Studios Hollywood informed me that it does not have a comprehensive list of merchandise on sale during the time “Battle for Galactica” was in operation.

There are more questions than answers about this object, and I hope that with further research, I’ll be able to piece together its unique story. Do you own an unusual pair of glasses? Tell us your story below!

Drew P. Robarge is Museum Technician in the Division of Medicine and Science at the National Museum of American History.