September 11: Photographers and their stories

On September 10, 2001, I flew non-stop from Washington, D.C., to Los Angeles, to attend a photography seminar at the Getty Museum. It never happened. I woke early on September 11 to prepare for a full day’s schedule. With the three hour time difference, it was just after 9:00AM on the East Coast. I turned on the television to see the news of the burning towers of the World Trade Center. Photography—still and video, film and digital—allowed us all to be witness to the tragic events of September 11. 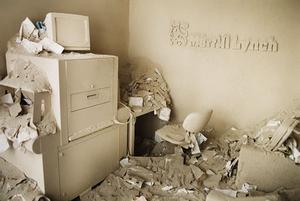 Both professional and amateur photographers documented September 11 and its aftermath in the three sites—New York, Washington, D.C., and Shanksville, Pennsylvania—and the response to the terrorist attacks in communities around the nation and throughout the world. I worked for the next year and a half to collect examples of these professional and amateur photographs, cameras, and equipment, for the Photographic History Collection at the National Museum of American History. More than 2000 images and several cameras were collected for the Smithsonian from 25 photographers. Each of the photographers had a unique story to convey with their donation to the collection.

Professional photographer Christophe Agou worked daily documenting life in New York City. An art photographer, Agou took the subway to downtown Manhattan as soon as he saw the news of the planes hitting the Twin Towers. He later admitted “seeing is not believing” when it came to his processing the chaos and destruction of the day. But he kept clicking his camera shutter capturing the paper and debris, the firefighters, and the loss. Agou donated ten of his September 11 photographs to the museum, and his own story. 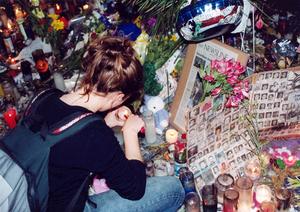 Amateur photographer Doug Potoksky traveled to New York City ten days after September 11, to volunteer his services as a professional cook. He never found that volunteer position, but connected with the firefighters on 8th Avenue, Engine 54, Ladder 4, Battalion 9 documenting their makeshift memorials to fallen comrades. Potoksky then continued to photograph the memorials in New York, especially at Union Square. He donated more than twenty of his photographs to the Smithsonian, and now works to make photography his full-time career.

I was also contacted by Smithsonian staff who took photographs on September 11 in Washington, D.C., and New York, offering donations for the collection. Stephen Delroy, was the building manager at the Heye Center of the National Museum of the American Indian, housed in the U.S. Customs House in Lower Manhattan. He assisted the National Guard in the aftermath of the terrorist attacks with access to the building as needed. Delroy’s request to photograph the rescue and recovery efforts at Ground Zero was granted on the evening of September 22, 2001. With his Hasselblad X-Pan panoramic camera Delroy made 60 images documenting the diligent efforts of crews to work through the night, excavating the site.

Collecting for September 11 was a most challenging and emotional professional experience, but an effort I consider among the most important of my career. I am still in contact with many of the professional and amateur photographers who freely shared their stories and images for the national collection.

Michelle Delaney is the Director of the Smithsonian’s Consortium for Understanding the American Experience, and former curator of photography at the National Museum of American History.