Beyond "Where were you?"—let's talk about September 11

We’ve all been hearing this question a lot in the days leading up to the tenth anniversary of September 11, 2001. From chats around the water cooler to the many news organizations collecting stories from their readers, the meme seems to be everywhere. National Geographic created a Facebook app. Country music artist Alan Jackson is even singing about it.

Because 2001 is only a decade past, many people remember precisely what they were doing on September 11, even if they were nowhere near one of the three attack sites. Others experienced similar moments when JFK was assassinated, when man first landed on the moon, the Challenger disaster, or even the death of a beloved musician, like John Lennon or Kurt Cobain.

At the museum, we talk about being a “steward of the nation’s memory”—providing a forum for reflecting on the experiences that define us as a nation and exploring the importance of history in our daily lives. But how do we provide such a forum for the 10th anniversary of September 11? And how can we move beyond “Where were you?” to get at the meanings and lasting legacy of these historic events? Today’s post looks at two ways the museum is addressing this goal: inviting public input inside the museum building and facilitating conversations online. 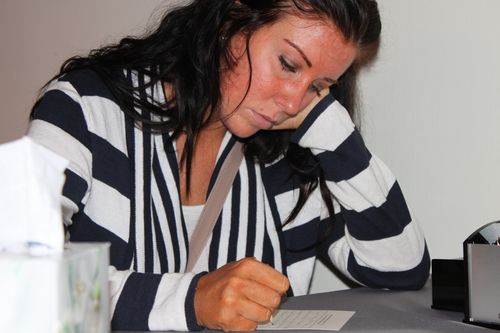 Melissa Foster writes down her reflections in the “September 11: Remembrance and Reflection” display.

In the museum’s special display of September 11 artifacts (on view through Sunday), we ask visitors to share their responses to our version of “Where were you?” We ask: “How did you witness history on September 11, 2001?” and “How has your life changed because of September 11, 2001?” Below you’ll find a sampling of comment cards we’ve received over the past few days. (In our 2002 exhibition, we posed the same questions; you can view those comment cards in a digital archive.)

People ask one another “where were you?” as a way to start a conversation. But usually what the asker wants to hear is more than just an account of what you were doing or wearing or how old you were. While these comments cards are a good start, the tenth anniversary of September 11 is an opportune time to move beyond merely beginning a conversation. Because my expertise is in new media, I looked to the Internet for another solution.

We know that the Web can be a powerful tool for bringing people together to discuss common concerns. But, as anyone who has ever read comments on a news website can attest, many conversations on the Web lack accountability due to their anonymity, with people simply talking past each other. The museum’s project, September 11: Conversations, produced in partnership with GMD Studios and the Smithsonian Channel, is designed to stimulate the give-and-take of real in-person conversations. The online dialogue format we've chosen to use makes candor more comfortable, exchanges more intimate, and disagreements more civil.

How? Well, each online conversation group contains a limited number of participants (around 20 per group) from different areas of the country who agree to participate for two weeks. The museum suggests topics for conversation but each group’s dialogue is determined by the personal experiences and interests of the group members. All conversations can be read by the public, but only the members of the group can initiate new topics of conversation or respond to others.

The format of this dialogue is a unique one, designed to be a safe environment for people with diverse backgrounds and beliefs to find ways to explore their differences and learn from each other. We ask that people make a commitment to participate daily and spend as much time asking each other questions as they do stating their own beliefs.

Here are some of the things we’ll be talking about over the next few weeks:

Please join us in the conversation (and invite your friends)! We can start with “Where were you?” But together we can take the nation’s dialogue about September 11 to new and more meaningful places. Sign-ups will remain open for the next few weeks.

Dana Allen-Greil is managing editor of the O Say Can You See blog.