Collecting the stories of September 11, a filmmaker's perspective

Editor’s Note: Today’s post is written by the producer/director of the Smithsonian Channel’s documentary, 9/11: Stories in Fragments. The documentary is based on the museum’s September 11 collections and the stories they convey. It is available for viewing on air or online.

Our crew was having dinner in New York City when we heard Osama bin Laden had been found and killed. We grabbed a cab back to our hotel so we could watch President Obama’s speech and on the way told the cabbie what had happened. He was so excited he could barely drive—trying to tune the radio in, asking us to tell him a second time. Later, the criticism of people celebrating made me think of that New York cab driver. He wasn’t vindictive; he was just so glad that part of a long, sad chapter of that city’s history was over.

The next day we did eight interviews with people who had experienced the events of that day firsthand. Overall, their reactions to the news were mild—we heard “that’s great but it doesn’t really change anything.” Maybe it was one pat headline too many for people who had had the misfortune to find themselves in the intersection of news and personal trauma. 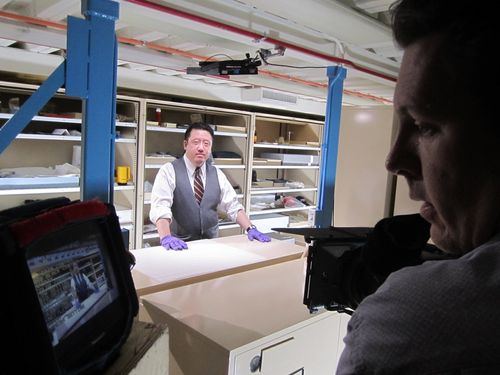 Cedric S. Yeh, Deputy Chair and Associate Curator, Division of Armed Forces History at the National Museum of American History during filming of the documentary.

Our film is about the objects in the National Museum of American History’s September 11 collection. At first we worried that the focus was too narrow, but the more people we talked to, the more it seemed like the right way to approach the story of that day. We filmed at the firehouse where Jules Naudet, who captured the only shot of the first plane hitting the World Trade Center’s North Tower, was making a documentary 10 years ago. I had a chance to chat with firefighters who were there that day and heard things I’d never heard before﻿—things that probably don’t belong in a film or a blog. Mostly though, it was clear that no one like me could do more than scratch the surface. One firefighter asked me to follow him down to their basement. In the corner of the room was a collection of their own—truck parts mostly, crushed and twisted metal. Things they had saved from the day, just lying in the corner of a basement for ten years. That’s how September 11 is—you don’t know what to do with it, you can’t throw it away.

It was hard to balance the story of the artifact collecting with the story of the day in the film. The survivors, the loss, and how the objects in the museum connect a viewer to that day trump almost everything else. But the Smithsonian curators were profoundly affected by the collecting experience. (One of them, David Shayt, is sadly now deceased. We never knew him, but we felt his presence as many of the people who donated objects spoke of how wonderful he was to work with.) We heard stories about climbing into shipping containers full of airplane parts and visiting the horrifically named “Fresh Kills” landfill-turned-crime-scene on Long Island. These curators spent months wading into what any sane person would try to avoid, looking for meaningful objects. Everyone who experienced the aftermath—the massive “pile” of wreckage in New York, the burnt hole in the ground in Shanksville, the melted office interiors at the Pentagon, got a dose of the awfulness that lasted much longer than one day. 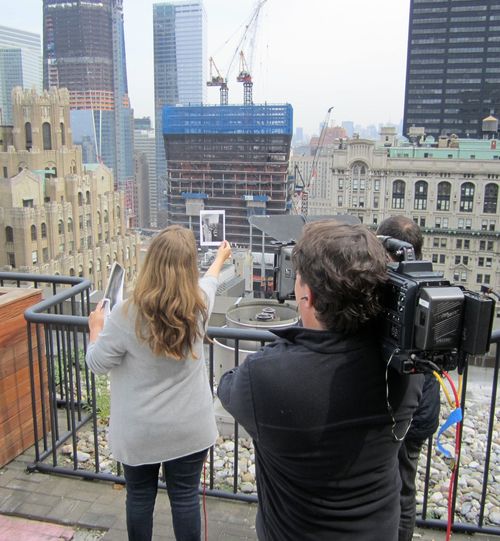 (Left) Carrie Hunt and (Right) Noe DeWitt as they look at the spot where the World Trade Center stood. They are holding up pictures that they took from that same space the day of the attacks.

Everyone in our film talked about the smell—from Noe DeWitt and Carrie Hunt who lived next door to the World Trade Center, to iron worker Jimmy Connor who, with his brothers from Local 40, helped clean up the wreckage. (Jimmy told us that he found a case of wine in a wooden box—something “crazy old like 1940 or something” with only three bottles broken that might have come from Windows on the World on the 103rd floor. They drank a few bottles one night with hamburgers at the Salvation Army’s mess tent for World Trade Center workers.) On our first day of filming with the actual objects, we got a sense of what they were all talking about. Even ten years later, they smell. It’s been described as jet fuel—and that is part of it—but it’s also everything else. It’s the smell of grief and disaster.

Jeff Wiener lost his life in the World Trade Center. Sitting at a desk in a library, deep in the part of the museum visited only by staff, I read through a fat file of paper donated by the Wiener family. There were official documents, reports from the medical examiner’s office detailing the effort to recover his remains, evidence of a long and careful search for information. And then there were stacks of sympathy cards. You could tell that Jeff was someone special, loved by many. The Wiener family donated his things to the museum to create a legacy for a young man who died without having had children of his own. I like the idea that in a hundred years another curator, researcher, or filmmaker may read those same cards and also try not to cry directly on them. 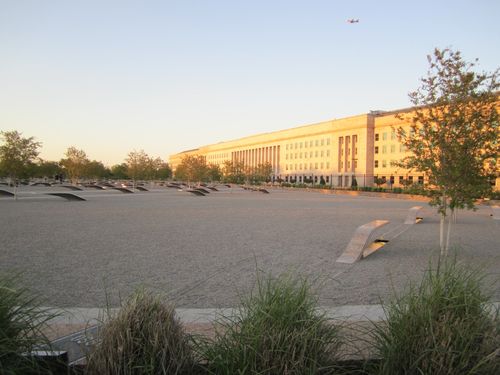 When we arrived to film at the beautiful Pentagon Memorial, the sun was going down, it was empty and I walked around looking for people’s names I knew—Barbara Olson, Jerry Henson’s office mate Jack Punches, Dave Thomas’ best friend Bob. The memorials are arranged by victim’s age. When you walk in, you almost breeze past the first few because there is a big space between them and the rest—that’s the space between the children and adults. I don’t know their stories, but those kids and that big space just killed me. A bunch of teenagers arrived in a bus to wander around and it seemed wrong that they were laughing and sitting on the benches.

The teenagers were there—wearing clothes I didn’t really understand, goofing around, and splashing the water—because life just rolls on and on which, undoubtedly, is a good thing. But what the next generation will know about September 11 won’t be based on memories. They won’t have stories of where they were when the towers fell. I hope that the personal stories in 9/11: Stories in Fragments and the physical objects in the Smithsonian collections will help bridge the gap of time, giving future generations a way to remember.

Molly Hermann is a producer/director for the Smithsonian Channel.

Posted in From the Collections, September 11, Film & Television 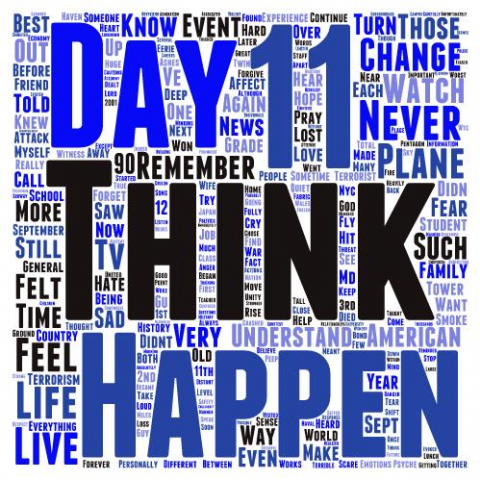