An experimental telegraph, a unique device used to spread seeds, an object named the "Greffuhle,” a list of all the places where one man traveled while serving in the Civil War—what do all these objects from the museum's collections have in common?

One would never guess it but in fact each of these items are, or are made out of, violins. In 1875 Elisha Gray was granted a patent for an "Electric Telegraph for Transmitting Musical Tones." One of his telegraph models, part of the Electricity Collection of the museum’s Division of Work and Industry, used a novel approach. A violin was used as a resonator which produced the musical tones transmitted through the telegraph wire. Another item, the unique nineteenth century seeder in the Division of Work and Industry’s Agriculture Collection, actually uses a fiddle bow to spread seeds from a spinning disk. 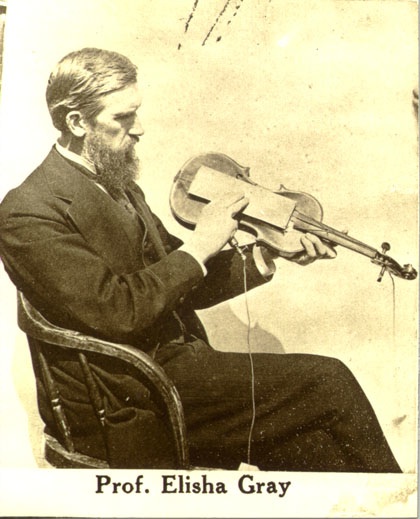 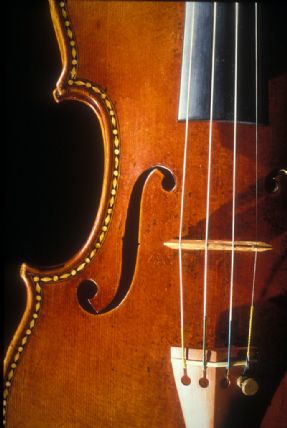 (Left) Elisha Gray, inventor of the Electric Telegraph for Transmitting Musical Tones.(Right) Named for the French nobleman who once owned it, the “Greffuhle” is a rare decorated Stradivarius violin.

There is a violin in the collections used for another purpose: as a war diary. Solomon Conn, a Civil War soldier with Company B of the 87th Indiana Volunteers, recorded a list of his travels and battles on the back of his "Greffuhle” violin, turning the instrument into a unique document of his adventures and military record. 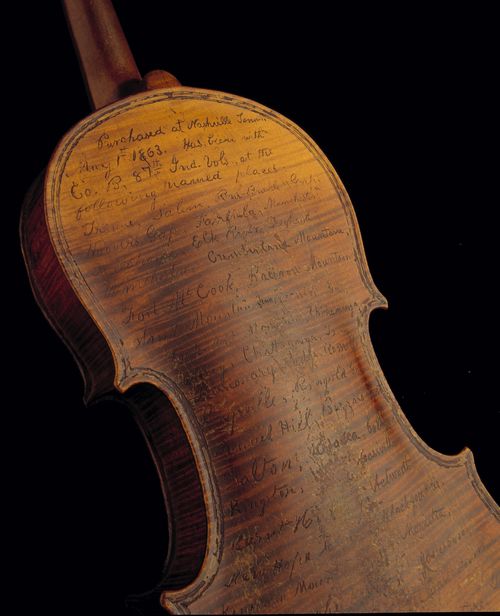 Civil War soldier Solomon Conn of Company B of the 87th Indiana Volunteers used his violin as a record of his travels and battles.

As I quickly realized during my summer internship at the museum, music is a topic which connects with a far broader range of collections than one might expect. My job was to find and catalog all the instances where music is represented in the museum’s artifacts. My sponsor? One member of a brand new and growing Smithsonian community called "Music at the Smithsonian” which is committed to serving as a hub for Smithsonian Institution musical research, exhibitions, education, outreach, and public engagement.

As an initial step of learning about some of the Smithsonian’s musical resources which could inspire such research or programming, I spent my internship discovering music-related objects from all areas of the museum’s collections. I found myself on a journey of discovering how these objects create a deep and nuanced picture of the role of music in American life and of music’s intersection with numerous topics and academic disciplines.

Editor’s note: This is part one of a series. Check out part two for more exciting music discoveries.

Posted in Civil War, From the Collections, Intern Perspectives