As a member of the Military History Collections Project team, I research the official collection records of the museum for information about the objects being inventoried by my colleagues.

Sounds a little boring, doesn’t it? Sure, some of the accession files that I process simply hold the standard paperwork that contain dry but important legal details,  such as the date on which the museum received the objects. More often, however, the files reveal vivid stories that bring to life the objects and the people who use them, like unusual military uniforms. However, of all the intriguing tales that I have encountered, this one takes the cake.

On March 6, 1962, Ulysses S. Grant III wrote the Secretary of the Smithsonian Institution begging for a rather strange loan agreement. His sister and the first grandchild of President Ulysses S. Grant (who was born in the Executive Mansion during his presidency and later married into Russian nobility), Princess Julia Grant Cantacuzene, desired to help throw a most festive tenth anniversary party for the Republican Women’s Conference. In order to cut the eight-foot tall birthday cake, the ladies required an equally impressive carving piece. That utensil just so happened to reside in the Division of Military History in the form of one of General Grant’s swords. 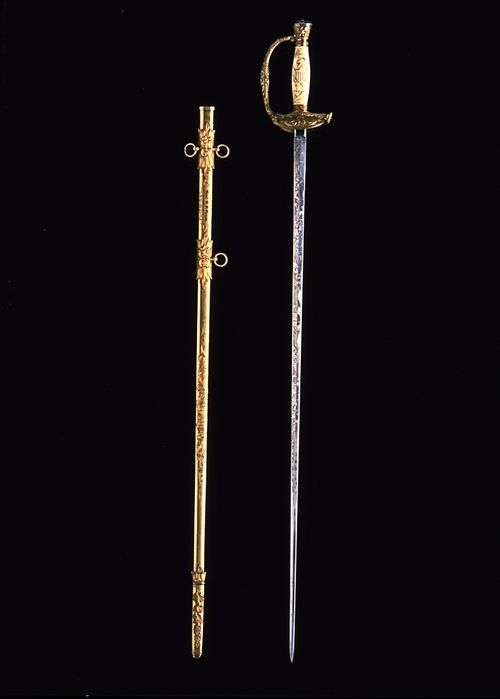 Inscribed “PRESENTED / BY / G.W. Graham. C.B. Lagow. / C.C. Marsh & John Cook. / 1861," this sword and scabbard were given to General Grant in March 1862. Colonel C. C. Marsh remarked that “they were ordered long since, and before a glorious victory…but they have fortunately been delayed…” because it now “affords us an opportunity to express our renewed confidence in your ability as a commander.”

While this arrangement is far from acceptable by today’s standards, museum practices were a little different in the 1960s. In fact, David Miller—our Associate Curator who specializes in firearms and weapons—affirms that the loaning of swords for cake cutting wasn’t all that bizarre. For many years, the Smithsonian Institution cared for Presley O’Bannon’s sword under a loan from the U.S. Marine Corps. “It was routinely sent out to cut the cake at the annual USMC Birthday Ball,” explained Miller. As to its current whereabouts: “That sword is now at the National Museum of the Marine Corps and they don’t use it to cut cake anymore.” 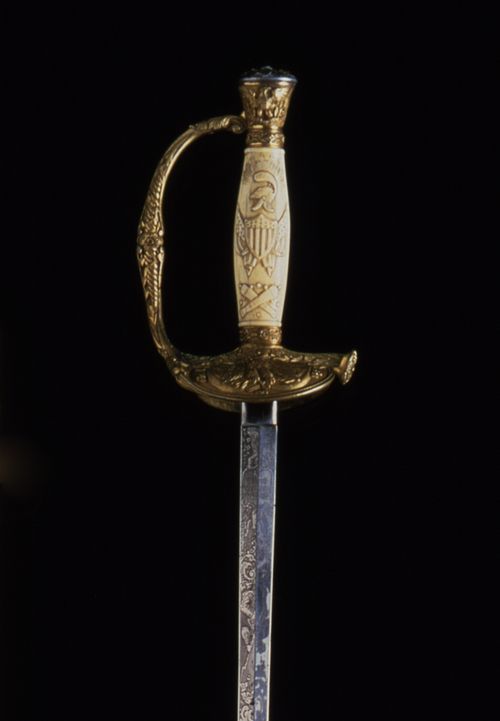 A close up of the hilt. The sword was presented  to the Smithsonian in 1886 by Julia Dent Grant and William H. Vanderbilt.

The Smithsonian Institution replied that it would be happy to loan a sword, provided that the sword be delivered directly to a member of the Grant family rather than the organization because of its historical value. Curator Edgar Howell even recommended a specific sword out of the four Grant swords in the museum’s collections because of “its direct connection with one of Grant’s early victories” and, more importantly, “its clean cut lines.”

This sword is referred to as the “Donelson Sword” in the accession file because it was presented to General Grant in 1862 following the Union victory at Fort Donelson. It was given to the Smithsonian in 1886 by Julia Dent Grant and William H. Vanderbilt along with about 225 other objects related to the military and political careers of Ulysses S. Grant. 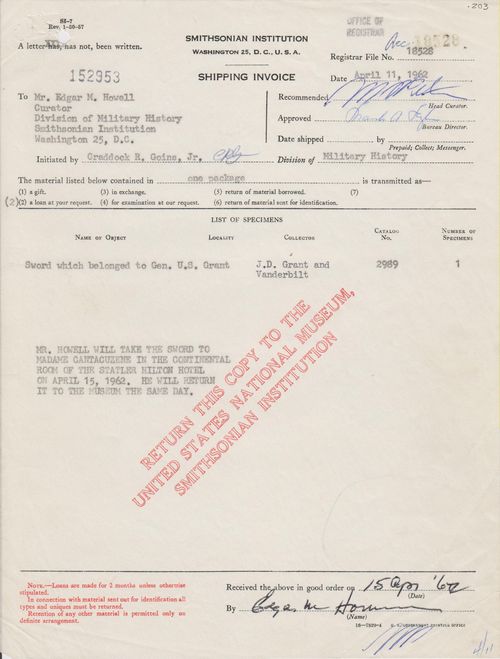 This document from the accession file illustrates the agreement made by the Smithsonian Institution to release the sword to Edgar Howell on April 15, 1962 for its secure delivery to Julia Grant Cantacuzene.

The anniversary party for the Republican Women’s Conference—which had been gathering female leaders from across the United States for spring meetings since 1953—received much anticipation. A Washington Post article titled “Gen. Grant Sword To Cut GOP Cake” described the gigantic confection as a four-tiered cake composed of three “dummy” layers of plywood topped off with an eighteen-inch tall edible cake layer. The entire creation would “be covered with sugar frosting and garlanded with edible sugar trimmings in flag red and blue-on-white background.”

On the evening of Sunday, April 15, 1962, Edgar Howell personally escorted General Grant’s sword to Julia Grant Cantacuzene in the Continental Room of the Statler Hilton in Washington, D.C. Princess Cantacuzene then passed the cake cutter to some of the female leaders of the Republican Party. From their specially constructed “cake walk” platform, they ceremoniously sliced the “elephant-sized cake.” Howell carefully returned the sword to the museum that night. Later that week, Cantacuzene wrote a warm letter of thanks to the Secretary of the Smithsonian, stating that “without the loan of the sword much of the interest and romance would have been lacking in the celebration.”

Today, you can find this sword in the National Museum of American History’s “Communities in a Changing Nation” exhibition. The icing remnants may be long gone, but it’s still serving up some great stories.

Posted in Civil War, From the Collections, Women's History