Editor's note: This blog is the fourth in a series of posts about the Jefferson bible conservation project.

It is difficult to describe how one faces the prospect of taking apart a national treasure. Of course, in order to reach the level of craftsmanship required, there are years of education and practice required, but that doesn’t begin to fully describe it. There are equal parts calm and anxiety, bravery and faith. To this conservator, it felt like a lunar landing, of sorts; after countless hours of preparation, one small step made with one sharp knife. 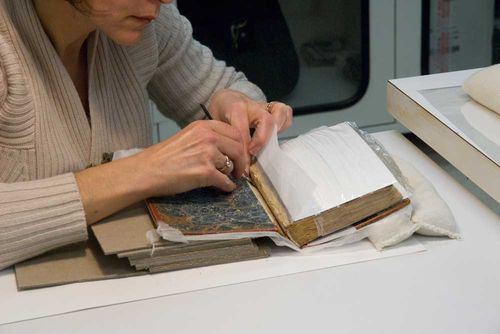 The goal of conservation treatment is the physical and chemical stabilization of an artifact. Finding a way to accomplish both goals with minimal risk and without compromising the historical integrity of the artifact is the challenge. After completing an exhaustive survey and analytical testing of the Jefferson bible, conservators at the museum examined the results and considered numerous treatment options. One-by-one, they eliminated various chemical stabilization treatments, determining that solutions which could benefit some of the materials used in Jefferson’s “little volume” placed other materials at risk.

Oxygen-free storage was ultimately determined to be the best solution to address the chemical reactions and provide the optimum long-term preservation environment. In the end, the only viable conservation treatment option was physical stabilization. Since the bookbinding had caused thousands of tears throughout the pages of the book, the binding needed to be modified and the fragile pages needed to be repaired. Without making these changes, the volume could never be exhibited or used again without causing further damage. The curator agreed, and authorized the disbinding of the Jefferson bible with the understanding that once page repairs were completed, the book would be rebound into its original covers again. 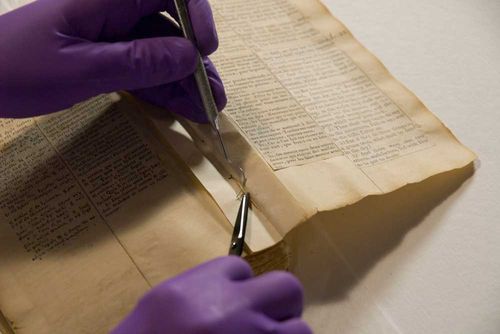 Since the original bookbinder had glued multiple layers of paper beneath the leather spine, the knife edge needed to pass between those layers, leaving an intact leather cover on one side and an intact Jefferson bible textblock on the other. With great care, the task was accomplished in just under seven hours. Once the cover was placed around a textblock-shaped support in order to maintain its original shape, the focus turned to the Jefferson pages.

On the second day of the disbinding process, the remaining layers of spine-lining paper and adhesive were removed from the back of the pages. Then, the sewing threads were gently snipped with surgical scissors, and the pages were lifted free. At last, the book was disbound, and the pages were as Jefferson had made them; forty three folios of paper.

Read the fifth and final post in the series. Or read part one, two, or three.

Janice Stagnitto Ellis is the Senior Paper Conservator at the National Museum of American History. 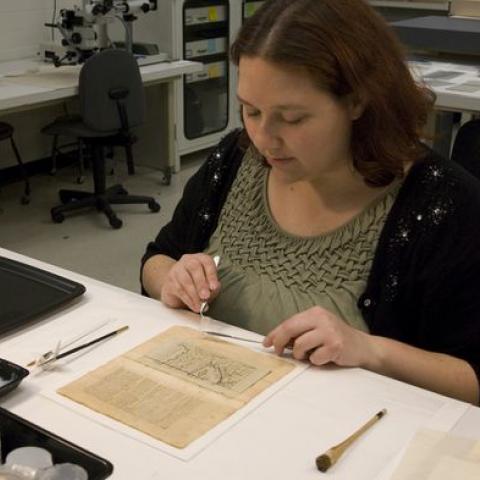