Electric cars: 100 years ago and today

“At slow speeds it runs on battery power,” transportation curator emeritus William Withuhn explained during my first ride in his 2003 Toyota Prius hybrid car. This was historic; not since the 1910s, when battery-powered cars were common, could mass-market vehicles cruise the streets silently and emission-free. Then, between 2006 and 2011, several manufacturers introduced new all-electric battery cars, betting that motorists would rather plug in at home than plug more and more money into gasoline pumps. Recently I visited a Tesla showroom, spoke with a Nissan LEAF salesman, and even looked at a solar charging station in a suburban shopping center. 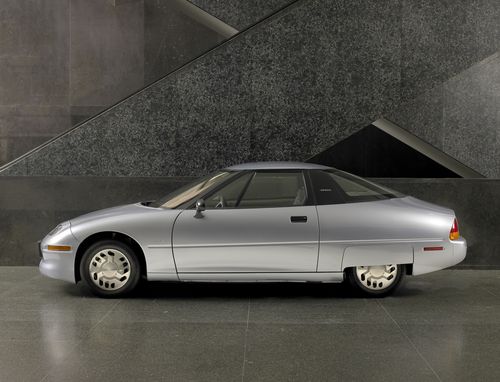 The wave of the future? This sleek 1997 EV1 was an experimental electric car made by General Motors that was leased on a limited basis but never reached the market and was quickly discontinued. Broader development and sales of electric cars began a decade later amid rising gasoline prices and growing concerns about air pollution and global warming. Photo by Hugh Talman.

Will consumers accept cars with rechargeable lithium ion batteries as readily as they switched to digital cameras, cell phones, and iPods? Many people think that electric cars are better than gasoline models, not only because of lower operating costs, but because of quicker acceleration and cleaner air. But with so many virtues, why did electric cars disappear in the first place?

Studying the museum’s electric car collection helped me find the answers. In the early 20th century, motorists had a choice of electric, steam, or gasoline cars, and it wasn’t clear that any one type would dominate the market. Electricity was beginning to power home appliances, lights, and streetcars, so it seemed natural to put electric motors and batteries in carriages. Electric vehicles like the museum’s elegant 1900 Riker, utilitarian 1904 Columbia runabout, and well-upholstered 1914 Rauch and Lang were simple to operate, and they were clean, quiet, and comfortable. 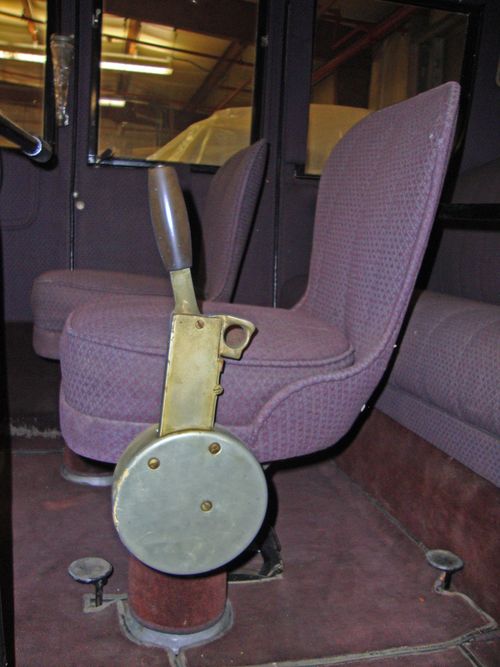 This 1914 Rauch and Lang electric was the personal car of Marie D. Gorgas, wife of William C. Gorgas, Surgeon General of the Army. She donated it to NMAH in 1929. Photo by Veronica Conkling.

But cars were expensive, and so was electricity. A sizable market for electric cars developed among wealthy urban women, but price and technical challenges limited the market. An electric car didn’t run very far between charges, and its lead-acid batteries required frequent maintenance. Electricity for recharging batteries wasn’t even available in most of rural America until the 1930s, and Americans had an urge to travel long before then. 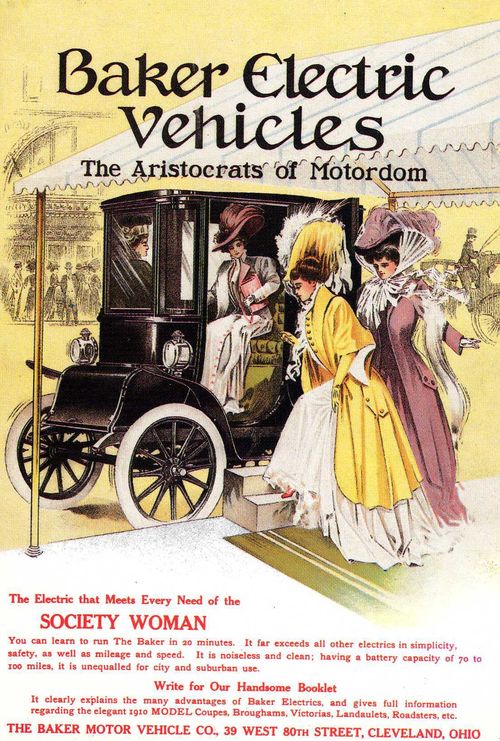 An easy-to-operate, electrically powered “parlor on wheels” provided expanded personal mobility for wealthy urban women in the 1900s and 1910s.

Most car buyers in the 1910s and 1920s chose gasoline cars, which were far from perfect but had much longer range between fill-ups. In most people’s minds, gasoline—not the car battery—was bottled lightning. Filling stations could be located anywhere, and before long, gasoline cars symbolized portable energy and expanded personal mobility. 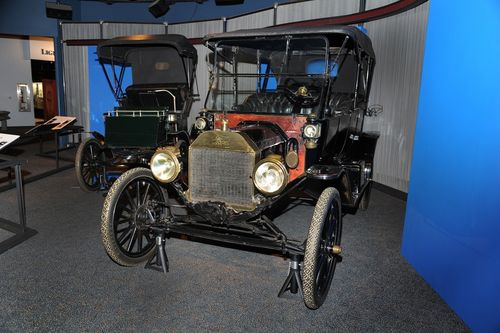 The museum’s 1913 Ford Model T touring car is significant because of what’s not beneath the radiator. The first owner replaced the engine crank with an electric starter, combining the ease of an electric car with the range of a gasoline car. Photo by Harold Dorwin.

In 1912, several makers of gasoline cars dealt a fatal blow to the electric car by taking two of its best features-switch-on starting and electric lighting–and adding them to their own vehicles. The museum’s 1913 Ford Model T touring car still came with a starting crank and acetylene gas headlights, but the first owner replaced them with a state-of-the-art electric starter and electric headlights. By the late 1920s, those features were standard on new cars, and electric cars were all but extinct. 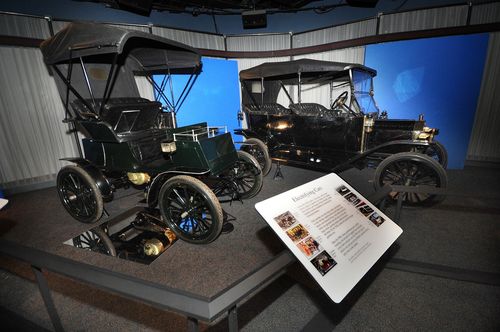 “Electrifying Cars,” an exhibit that opened at the musuem on October 27, 2011, looks at the market for electric cars 100 years ago and today and efforts to combine the advantages of electric and gasoline cars. Left, a 1904 Columbia electric car. Right, a 1913 Ford Model T touring car with an owner-installed electric starter and electric headlights. Photo by Harold Dorwin.

Fast forward to the 1990s, when California required that a percentage of new cars must emit no pollutants. The museum’s 1997 General Motors EV1 electric car is one of several makes and models developed to meet that mandate. Unlike other electric car prototypes, the EV1 was designed and built from scratch. It boasted sophisticated power control systems, lightweight materials, and an aerodynamic shape. But the company decided that the EV1 wouldn’t be commercially viable because of high production costs, and GM and all other manufacturers pulled the plug on electric cars.

Fast forward again to the early 21st century and headlines about escalating gasoline prices, surging global demand for gasoline, strained oil supplies, and global warming. GM introduced the Chevrolet Volt, a new type of electric car that runs on battery power with a gasoline-generator backup, while Nissan, Mitsubishi, Tesla, and Fisker introduced all-electric cars. With sales of electric cars close to 15,000 in 2011, a growing number of Americans are in the mood to turn on, plug in, and drop out of the oil distribution chain.

Roger White is Associate Curator for Road Transportation with the Division of Work and Industry at the Smithsonian’s National Museum of American History.