This story starts with a fork.

As a contractor with the Military History Collections Inventory Project, my job is to count things. In preparation for a storage unit to be moved, my teammates and I begin by taking an inventory of all of the objects housed within the unit. The inventory process requires that we check an object’s unique catalog number, track its location, take measurements and photographs, and then write a short description of the object. The fork itself has little to distinguish it from the other standard-issue Army silverware in our collection. The tag reads: “Fork owned by Lieut. Kislingbury, used at Cape Sabine by Brainard.” 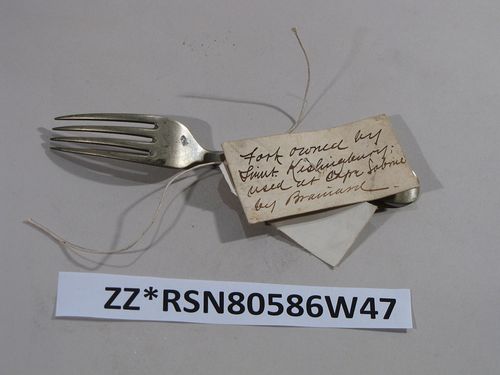 Fork used on the Greely Expedition. The tag reads: “Fork owned by Lieut. Kislingbury, used at Cape Sabine by Brainard.”

Although the story is preserved in the Division’s records, it is not one I was familiar with. I wanted to confirm that I was reading the handwriting correctly before I updated our description, so I began with an Internet search. That is how I learned the story of the 25 men of the Greely Expedition, also known as the Lady Franklin Bay Expedition. 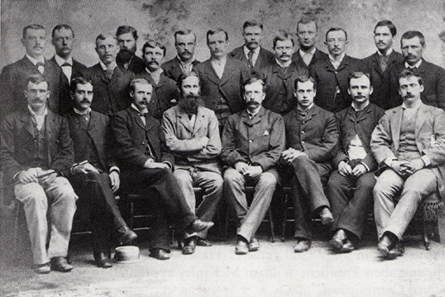 Greely’s Lady Franklin Bay Expedition members. Brainard and Kislingbury are the second and third individuals from the left in the seated row. From: Stewart, Richard W., ed. Chapter 13, “Darkness and Light: The Interwar Years 1865-1898”.

First Lieutenant Adolphus Greely’s 1881 Lady Franklin Bay Expedition was organized by the Army Signal Corps, which was the branch of the Army responsible for weather stations and meteorological observations. One of the goals of the expedition was to establish an Arctic research station that would serve as a link in a chain of internationally-built bases around the Arctic Circle. These stations were intended to simultaneously collect weather observations for the First International Polar Year. Primarily structured as a scientific mission, the expedition also had a secondary goal of achieving a new “Farthest North,” or highest latitude reached by explorers from around the globe. 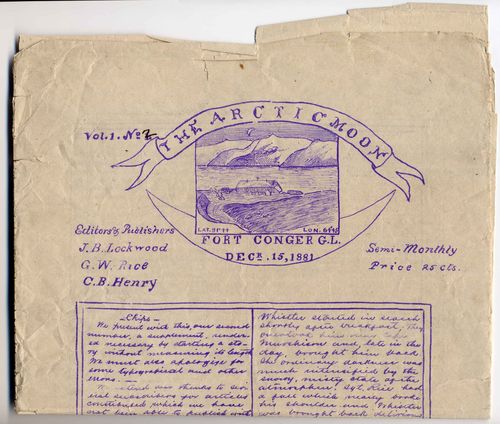 The Arctic Moon, December 15, 1881. This newspaper published by the men of the Expedition for internal distribution details anecdotes regarding individual members as well as news of the camp. Throughout this issue is a spirit of anticipation of Christmas.

Second Lieutenant Frederick Kislingbury, the owner of the fork, was second-in-command of the expedition party, and Sergeant David L. Brainard was chief of the enlisted men. Brainard and two companions would go on to accomplish the secondary goal of reaching a new "Farthest North." The expedition established a research station named Fort Conger at Lady Franklin Bay and began collecting hourly meteorological measurements such as temperature, wind speed, and barometric pressure. 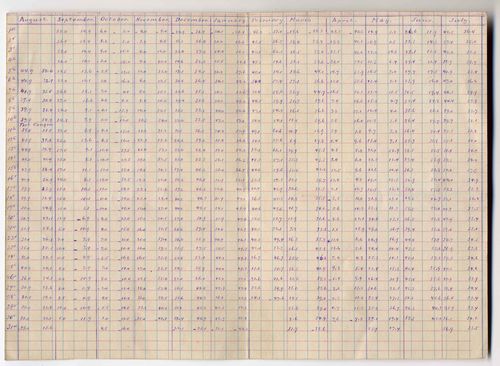 Monthly table of thermometric measurements from Ft. Conger. Compiled data from the First International Polar Year is available through the National Oceanic and Atmospheric Administration.

Research proceeded as planned in the first year but conditions began to deteriorate at the base as rations ran low after a failed resupply attempt in August 1882. After another failed attempt in 1883, Lieutenant Greely moved the expedition’s base to Cape Sabine, which had been identified as a rendezvous point for the ships and the expedition party. Greely hoped to find stores of food there and to improve the chances of meeting an Army resupply ship.

When they arrived at Camp Sabine in October 1883, Greely and his men discovered that only one of the ships had been able to leave supplies and the rations were only enough to last 25 men for a few weeks. Food began to run low and by January of the next year, members of the group began to sicken and die.

Accusations of theft from the dwindling food supply flared. Even though the expedition supplemented their rations with tiny native shrimps and lichen, the situation became dire. The group was forced to resort to extreme measures in order to conserve what little food they had. After being warned numerous times, Private Charles Henry was executed on June 6, 1884, after being caught stealing shrimp from the communal mess pot. 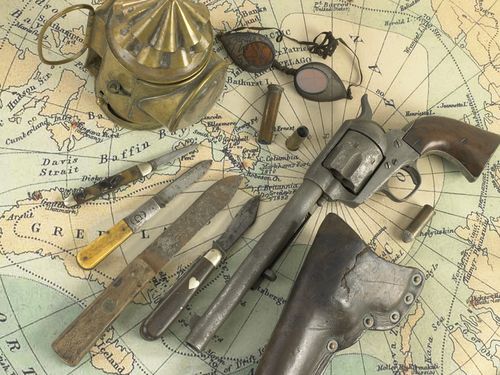 In addition to the fork, the Division also has records and personal papers, photographs, flag fragments from Lady Franklin Bay, and scientific specimens from the expedition. Many of these objects were donated to the museum by David Brainard, others by John P. Kislingbury, Lieutenant Kislingbury’s brother; additional objects related to the expedition were loaned to the museum by Greely’s children.

Sergeant Brainard survived the expedition but Lieutenant Kislingbury did not. Kislingbury was discharged from the expedition for insubordination in August 1881 but missed catching the ship that had brought them to Lady Franklin Bay before it left the camp. Kislingbury had no choice but to stay with no defined role in the party. He died of starvation on June 1, 1884.

The group was completely isolated in the Arctic, but after three years they were finally rescued on June 22, 1884. Only six of the initial party of 25 survived. When they returned home, the expedition’s reputation and scientific findings were haunted by accusations of murder and cannibalism.

The fork has made a lasting impression on our team, and it’s especially poignant that the fork is from an expedition where so many died of starvation. The legacy of the tragic Greely Expedition remains relevant today, as the scientific measurements the members took while enduring unrelenting hardships are now being used by scientists to study climate change.

Cassie Mancer is a Museum Specialist working with the Armed Forces History Collections renovation and inventory project at the National Museum of American History.