Editor’s note: This blog is the fifth in a series of posts about the Jefferson bible conservation project.

After careful analysis, it was determined that the most significant damage to the Jefferson Bible was being caused by the original binding. Authorization was granted to temporarily separate the Jefferson pages from the binding so that the pages could be repaired and the binding modified. The book was disassembled into individual folios and every folio was photographed front and back to document its condition before treatment. It was time for the curator and conservators to take a close look at each page together and identify all areas needing physical stabilization. Extensive notes were made on copies of the photographs of each page.

Even though the folios were opened flat, the crease at the center of the paper, called the gutter, remained hidden beneath long narrow paper stubs which the original bookbinder, Frederick Mayo, had glued to the inside of every page. In addition, he added a second stub to the outside of every other page. As was mentioned in the first blog, these stubs were added by the bookbinder to make the spine of the folded pages just as thick as the center where Jefferson had glued a layer of clipped New Testament verses on the front and back of each page. 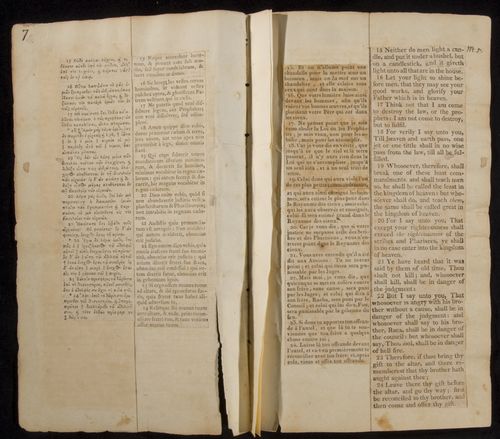 Inner stub is visible in an open folio.

These stubs were causing damage to the delicate Jefferson document. They needed to be removed so the conservators could mend the Jefferson paper, and to eliminate further damage. Conservators used both solvents and poultices to soften the adhesive that held the stubs in place, and carefully removed the stubs from Jefferson’s paper beneath using Teflon micro-spatula tools. Any paper fragments or newly discovered bits of debris found lodged under the stubs were carefully placed in polyethylene specimen bags which were labeled with the location were they were found. These fragments were like missing jig-saw puzzle pieces which conservators were able to reattach in their original locations. 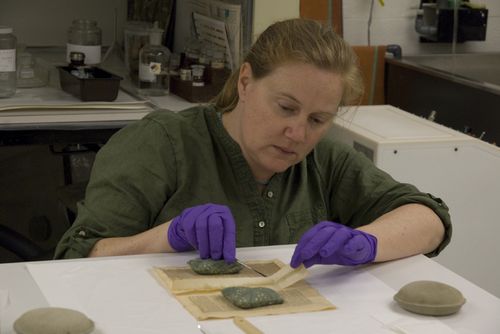 Conservators then carefully brushed the gutter of the folios with a soft brush, to remove any residual dirt trapped beneath the stubs. This cleaning was first tested under a microscope to assess whether the brushing had an adverse effect on the paper fibers.

Before conservators began the delicate process of mending any tears or breaks in the paper, a toolkit containing an array of mending tissues in varying colors and thicknesses was put together for each conservator. These gossamer-thin repair tissues are made of kozo, a fiber which comes from the inner bark of the mulberry tree. Kozo paper is long-lasting, remarkably strong for its weight, and chemically stable. The tissues were air-brushed with acrylic paint in a wide variety of beige, tan, and light brown colors to match the Jefferson’s pages, assuring the perfect color and weight tissue could be selected for every tear on every page. Mends were adhered with either a water-soluble or a solvent-based adhesive. Solvent-set adhesive was used on areas with iron-gall ink to prevent both bleeding if the ink and the migration of acidic components into the paper. 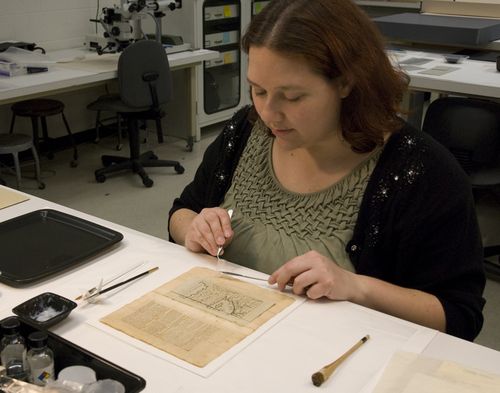 With the before treatment documentation photography and repair kits ready, the curator and conservators worked together to examine every instance of damage on each page and discussed where and how mends were to be made so that all evidence of Jefferson’s hand and use would be preserved. The goal was to physically stabilize the pages, not alter them or make them appear “new.” After the authorization process was complete, conservators spent approximately 2,000 hours mending the numerous paper tears and cracks in the Jefferson Bible. 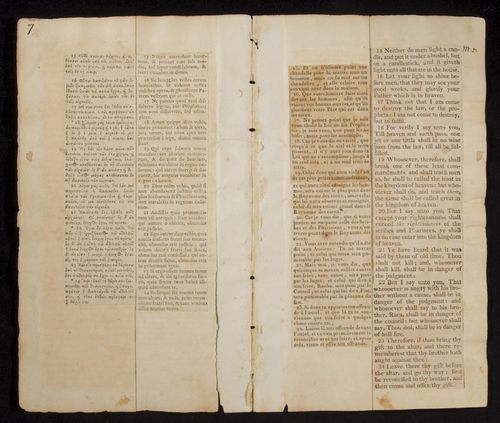 A folio after stub removal but before paper mending 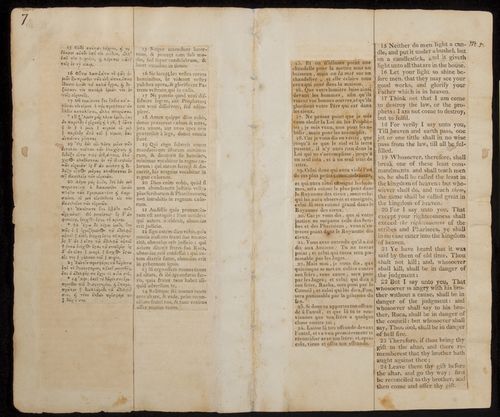 The same folio after paper mending

The pages were then imaged by museum photographer Hugh Talman using a 50 megapixel Hasselblad camera. These images were used to create a new Smithsonian facsimile of the object. The images are also online so anyone can view the pages and zoom in on interesting details.

Read part one, two, three, or four in this series.

Laura Bedford and Emily Rainwater are Post-Graduate Fellows in the Paper Conservation Lab at the Smithsonian's National Museum of American History.