Digging into the museum's collections

﻿Editor's note: This post is the third of three submitted by students as part of a Museum Studies class co-taught by Shari Stout, collection manager in the Division of Work and Industry. The class, which took place in storerooms at the National Museum of American History during the Fall 2011 semester, provided hands-on experience with issues relating to the rehousing and storage of onsite collections.

I must be losing my mind! Why would I leave a successful 30-year career in information technology to start a new career in the museum field? The face across the lobby stared back at me with no expression; I guess he was wondering too. Of course he couldn’t hear me. Standing behind glass doors, he had a permanent view of everyone coming and going. I shouldn’t be offended though. I walked up to him, nodded, and I thought he might have winked at me. Yes, I’m sure he smiled too. That was all the validation I needed.

Indeed, C-3PO [now off display] still looked sharp after his intergalactic adventures--and it was then I realized that I was exactly where I needed to be after all: the lobby of one of the coolest places in Washington, D.C., the Smithsonian's National Museum of American History! Now, it’s time to get upstairs to my directed research class. I am pursuing a graduate certificate in Museum Studies at The George Washington University. Jim Carroll, Aspiring Museologist--has a nice ring to it! I gave a thumbs-up to C-3PO and headed to the elevator.

I didn’t know a lot about what I’d be working on, but there were two other students in the course with me, and the next 14 weeks or so would be new and exciting, for sure. What I didn’t know at the time was that I was about to become somewhat of an expert on a German model plow collection from the 1860s. This was intriguing!

The storage room where we met was filled with an eclectic (yet well organized) assortment of objects: shoes, mining safety lamps, old spears and weapons, a “beer paraphernalia collection,” and, of course, the model plows I would be working with. Stashed away in several old cabinets in a dim corner of this treasure trove room, I wondered--as I took my first close look at the collection--how they came to be here, where they stopped along the way, and why they were considered important. I mean, they’re just plows, right? 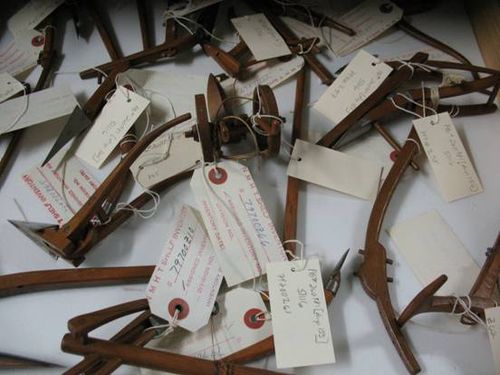 Part of the Rau Model Plow Collection, before rehousing project

The collection came to the U.S. National Museum (the predecessor of the current Smithsonian museums) back in 1910, transferred from the Department of the Interior. I learned that there are at least three collections of these 1/8-scale models, each containing hundreds of plows. They were made at the Royal Agricultural College of Hohenheim, Germany in the 1860s, under the supervision of Dr. Ludwig von Rau. Some of the models were on display at the 1867 Paris Exhibition. Andrew D. White, the first president of Cornell University, obtained one set in 1868. There is a second set on display in Hohenheim; and the Smithsonian has a third set. The collection is important because it illustrates the development of plows throughout history, from as far back as 3000 B.C.E. The plows are constructed primarily of wood and metal, and are exquisitely detailed and historically accurate. 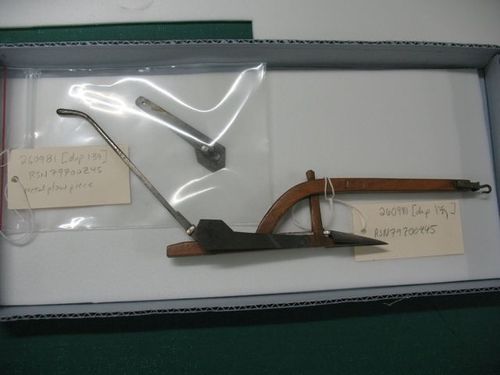 There are two primary objectives for this directed research project: (1) submit a proposed rehousing document, identifying existing risks and ways to mitigate them; and (2) implement some of my recommendations during the semester. This may include: replacing old foam drawer liners with new material which will help cushion the plows; constructing custom Ethafoam fittings for some of the plows that have very sharp metal edges; and making custom boxes for several plows which are damaged. These actions will help protect them while in storage. As there are a large number of plows in a very confined storage area today, I will use an adjacent cabinet to off-load several of the plows; this will allow more appropriate spacing of plows within each drawer. Finally, I will inventory all plows in one of the storage cabinets.

For me this isn’t tedious work, it’s important for the museum, and it’s fun! So, I must not be losing my mind after all. I’m living a dream, wouldn’t you agree?

Jim Carroll is a Museum Studies student at The George Washington University.