Editor’s note: This blog is the second of a two-part series exploring the process of bringing early sound recordings to life for the first time in over a century.

There is always something new waiting to be discovered at the Smithsonian, whether it is an artifact, a recorded sound, or an overlooked story.

Over the past two years, Carl Haber and Earl Cornell of the Lawrence Berkeley National Laboratory and Peter Alyea at the Library of Congress have partnered with the National Museum of American History to coax sound recordings dating to the 1880s into telling (and singing!) their stories. The recovered recordings are the Volta Laboratory Associates’ early experiments at recording and even reproducing live sound. These recordings were made in Washington, D.C., by Alexander Graham Bell, his cousin Chichester Bell, and Charles Sumner Tainter. In some ways, the inventors anticipated the modern music industry. They experimented with reproduction and copying techniques for possible mass-consumption of their discs, and, unlike Edison’s phonograph cylinders, the Volta records were durable enough to be played multiple times. 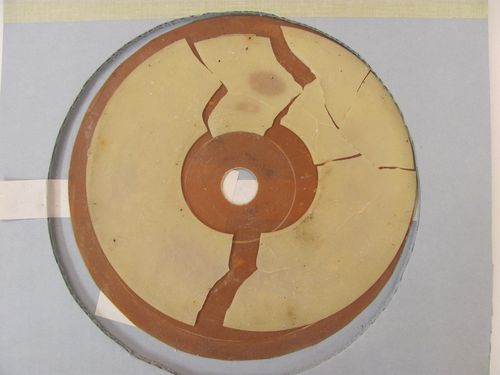 Some of the Volta recordings were on wax mounted to pasteboard, a material similar to the covers of a hard-back book. Photo by Annie Dobberteen.

Over 130 years after the Volta group sealed some of these recordings in tin boxes and deposited them in a vault at the Smithsonian, the Volta objects in the museum’s Work and Industry collection have been given back their voice. On Tuesday, December 13, 2011, the recordings were played publicly for the first time.

The sound recovery project has inspired others to look more closely at the Volta collection. Lemelson Center Fellow Patrick Feaster has been examining the museum’s experimental recordings to prepare a discography. 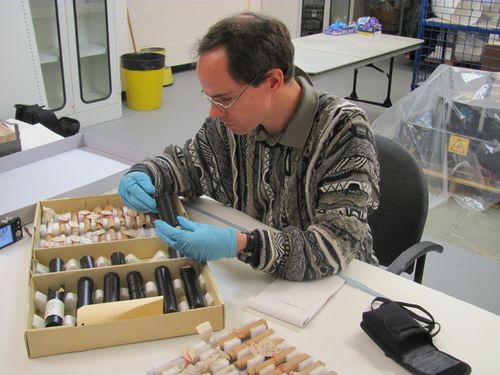 As Dr. Feaster worked with our collection of about 400 objects this fall, a handful of previously uncatalogued, virtually unknown Volta artifacts surfaced. About forty of these early recordings had stayed off the radar because they had never been assigned proper catalog numbers. This is highly unusual from a modern collections management point of view; today, new objects are almost immediately assigned unique numbers upon their entry into the collection. But for some reason, this had not happened to these discs. Though well taken care of, they had become a bit of a Smithsonian mystery. We’ve been able to listen to a few of the discs, but what else could they bring to light? 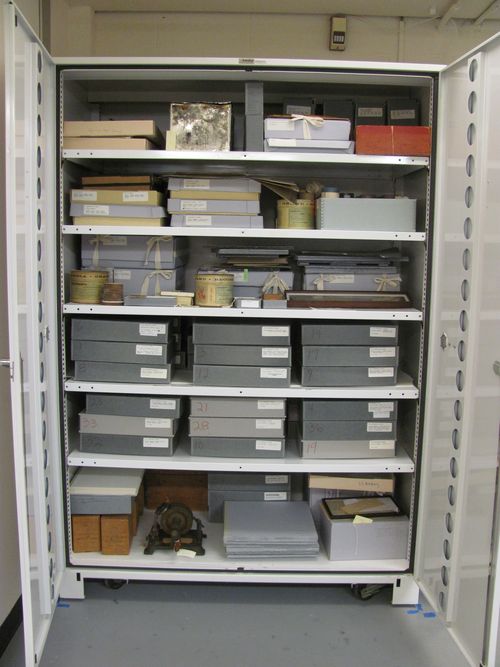 Early sound recordings have been stored at the Smithsonian for decades. Photo by Annie Dobberteen.

My task was to examine and number these records to finally give them an official home within the larger Smithsonian numbering system. I gently inspected discs made of everything from copper (now chipping due to age) to cardboard to fragmenting plaster. Some discs had bits of foil imbedded in the wax coating the pasteboard, and others had notes etched into them by Bell and his associates. I found other strange, square-shaped objects that turned out to be impressions of recordings intended to be used for mass-reproduction.

These early recording prototypes would be abandoned in the late 1880s in favor of Volta’s wax cylinders, which were used for dictation and stenographic office work as late as the 1930s. But physically interacting with the Volta inventors’ initial creative thought processes was a privilege, and I was fascinated with the idea that these delicate discs have so much to tell and are now getting the chance. 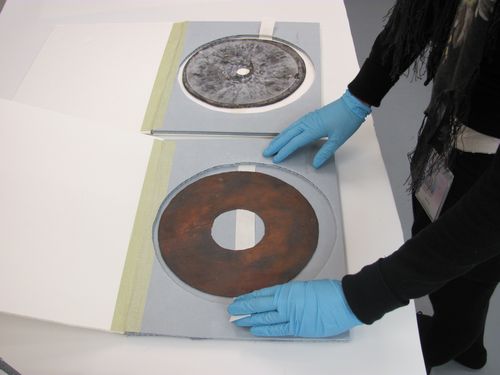 The discs in the collection were made using a variety of metals, paper, wax, and foil. Photo by Christine Klepper.

So far, the voices on these previously unplayable discs remain unidentified. The next step for the recordings will be to recover and analyze those formerly silent voices. As the project moves forward, it is likely that we will be able to clearly identify Alexander Graham Bell himself.

PART 1: Trilled R's and the dawn of recorded sound in America

Annie Dobberteen is an intern in the Division of Work and Industry at the National Museum of American History.