Editor’s note: This post is the second of three submitted by students as part of a Museum Studies class co-taught by Shari Stout, Collection Manager in the Division of Work and Industry. The class, which took place in storerooms at the National Museum of American History during the Fall 2011 semester, provided hands-on experience with issues relating to the rehousing and storage of onsite collections.

Reduce, Reuse, Recycle! This familiar phrase says a lot about how we think about plastics today. For many of us, the imperative to recycle is caught up with our ideas about plastics and their permanence. Who hasn’t felt a little twinge of guilt at the thought of their unrecycled soda bottle sitting stubbornly in a landfill for hundreds of years?

It might seem strange, then, to realize that the preservation of plastics is actually a big challenge for museums. Unlike stone, wood, and metal, which have been used by humans for hundreds of years, most varieties of plastic were developed within the last century, meaning we still have much to learn about their long-term stability. Although we tend to think plastics will last forever, I bet you can think of plastic items in your own life that have shown signs of degradation—a clear plastic folder that becomes yellow with age or a vinyl toy that got sticky and tacky in a humid space, for instance.

As a graduate student in Museum Studies at The George Washington University, I have become fascinated by plastics history and problems of plastics preservation, particularly after spending the past summer working with one of the museum’s largest collections of plastic objects—the Perlov collection of celluloid. This semester, I jumped at the chance to work with a lesser known collection, the Fessenden collection of natural specimens preserved in plastic.

Working for the United States Department of Agriculture in the 1940s, Dr. George R. Fessenden must have seen plastics as permanent in the same way many of us do today. He developed two techniques to preserve plant and animal specimens in plastic, methods he hoped would help them retain their bright colors indefinitely. At the time, this was such a triumph that the Smithsonian Arts and Industries Museum put on an exhibit about the miraculous technological development. Visitors marveled at five-year-old roses that looked like they were picked the day before and tiny minnows that seemed to have been plucked directly from a stream. 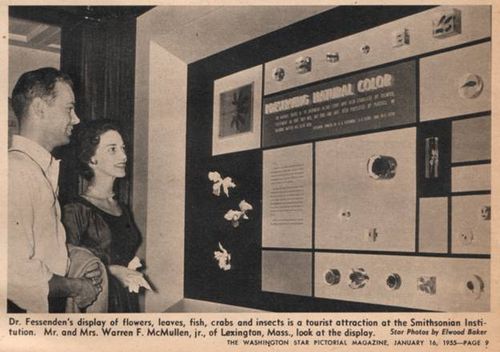 Over time, however, the technique has proven not to have been as timeless as once thought. The kind of plastics Fessenden used made all the difference—one method encased specimens in methyl methacrylate, a relatively stable plastic. The other used cellulose acetate, a kind of plastic we now know tends to degrade and yellow over time. Although all of these samples have been kept in the same conditions over the past sixty years, the different ways in which they have aged and degraded is useful visual study in itself. 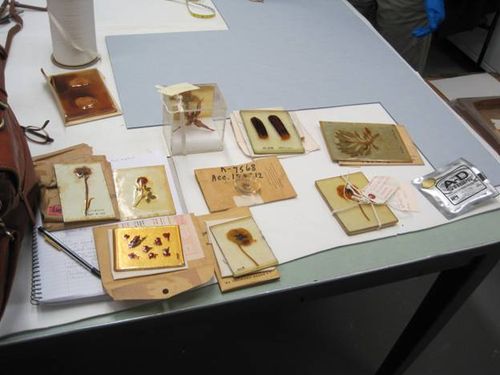 An array of Fessenden specimens as they look today

These visible changes aren’t the only ones happening, however. By using A-D test strips, a kind of paper that turns from blue to green to yellow in the presence of airborne acids, it is possible to see that the cellulose acetate specimens are releasing acidic vapors as they degrade. Vapors like this can be harmful to other objects in the museum, so decisions will have to be made about how to isolate these dangerous plastics from the rest of the collections. 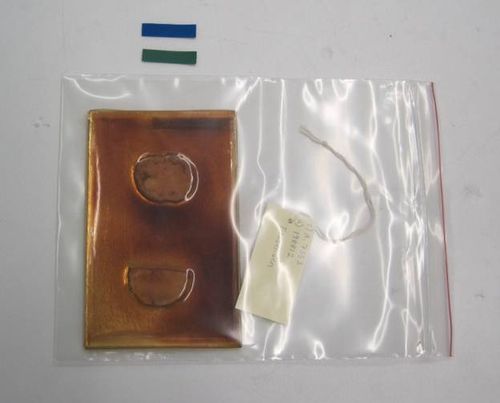 Slices of potato in cellulose acetate. At one time, plastic would have been clear. The green A-D test strip above was kept in a bag with the object for one week; the blue strip is an unused A-D test strip for color comparison. Green color indicates that the object is unstable and releasing acidic vapor. 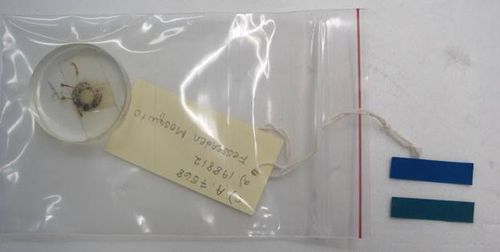 Mosquitoes and mosquito larvae preserved in methyl methacrylate have aged very well and look nearly identical to images taken of the object from the late 1940s. Notice that the lower A-D test strip, which was kept in a bag with the object for a week, has changed only very slightly in color, indicating a fairly stable plastic with minimal off-gassing.

While there’s no way to completely halt deterioration once it has started, there are steps we can take to slow the process. Part of my work this semester has been to remove objects from the old envelopes they were stored in and place them in stable blueboard trays, which I made specifically to allow for better airflow around objects. Regular paper, like that used in envelopes, tends to release acid over time, which increases damage to the objects. What’s more, the enclosed environment of a sealed envelope traps any acidic vapors released by the object, creating a microclimate that will speed degradation. By storing Fessenden’s collection in well-ventilated, archival trays, acidic vapors are able to disperse, thus lengthening the life of the objects. 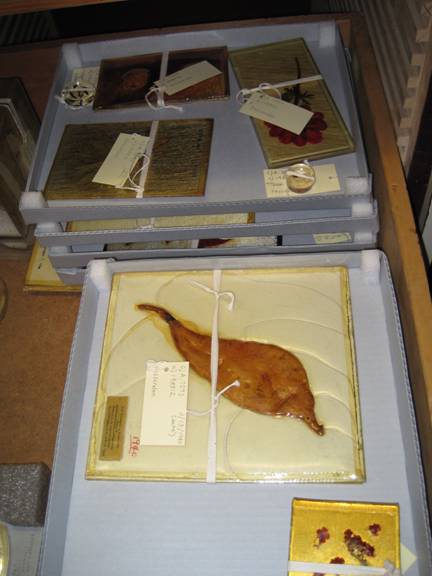 Solutions to these and other issues concerning the preservation and storage of plastic objects are an important part of ongoing research here at the Smithsonian, a fact driven home by the creation of the Institution-wide Age of Plastics consortium in 2010. As a future museum professional and someone with a now admittedly geeky obsession with plastics issues, working with the Fessenden collection at the museum has been a wonderful chance to expand my knowledge about plastics, their “permanence,” and the challenges of their preservation.

Mallory Warner is a Museum Studies student at The George Washington University.