A day of remembrance

Editor’s note: This blog is the second in a three-part series on the 70th anniversary of Executive Order 9066.

The museum and the Smithsonian's Asian Pacific American Program marked the 70th anniversary of Executive Order 9066, which resulted in the imprisonment of more than 110,000 Japanese Americans, with an event of remembrance on February 18 in the Warner Bros. Theater. The first Day of Remembrance since the awarding of the Congressional Gold Medal to three units of Japanese American WWII veterans in 2011 held particular significance to those Nisei (second-generation Japanese Americans), and their families, who waited more than seven decades for official recognition of their valor and bravery.

The program began with opening remarks by the museum’s Interim Director Marc Pachter and the APA Program Director Konrad Ng, who expressed the paramount role of the Smithsonian in the dissemination of the Asian Pacific American experience throughout the nation’s history. Secretary of Veterans Affairs General Eric Shinseki then delivered a poignant speech reflecting upon the role of the loyal Japanese Americans who volunteered in the 100th Infantry Battalion, 442nd Regimental Combat Team, and sections of the Military Intelligence Service during World War II.

To Shinseki, the afternoon represented a step forward in the effort to inform the greater public about the history of WWII internment camps and Japanese American military regiments. As younger generations grow increasingly distant from their heritage and ethnic core, he said, now is the time to pass on the stories, traditions, and lessons imparted.

The following guest panel, which included Japanese American veterans and internment victims, illustrated the value of oral history as historical and cultural source material, as participants chronicled events that occurred during WWII. Military Intelligence Service veteran Grant Ichikawa retold childhood stories of his reluctant attendance at Japanese language school, which coincidentally led to his qualification as a valuable translator during the war. A powerful moment occurred when Ichikawa described conducting the surrender of an elite Japanese military company near the end of the war. “I actually haven’t told many people about this,” he prefaced, before vividly recalling the unit’s surrender and his own spark of realization that he was lucky to be alive given the distinguished vein of the captured Japanese forces. Panel moderator, former Director of the Asian Pacific American Program Franklin Odo, emphasized the paradox of these minority stories, saying many Japanese American veterans keep their narratives to themselves because they feel “it is not for them to tell,” while younger generations fail to elicit this important historic material as they believe “it is not for them to ask.” 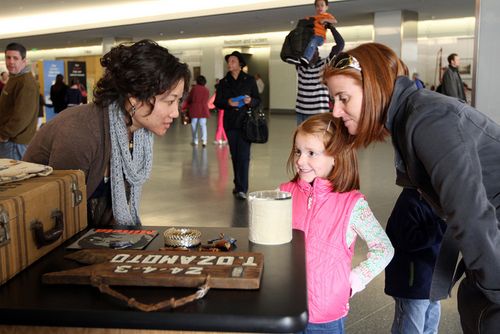 The program extended beyond the Warner Bros. Theater, through a temporary display of objects and TalkBack Boards erected throughout the museum. Objects representing Japanese American History, including the Congressional Gold Medal, were brought out of storage by museum curators who explained the artifacts’ significance and answered questions. The TalkBack Boards posed questions addressing the legacy of Executive Order 9066 and visitors were encouraged to voice their opinions through means of written response. Most replied with feelings of disappointment or embarrassment regarding the executive decision, while others stated the order was necessary for the greater good of the nation. A significant portion of talk-back participants weren’t even aware of America’s own history of internment. 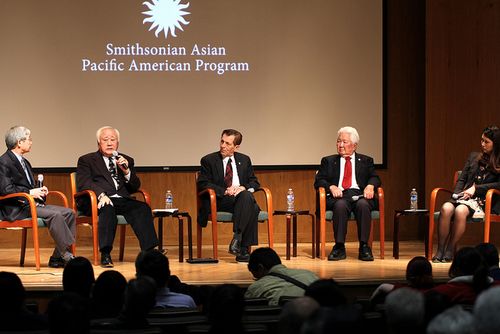 The Smithsonian’s 2012 Annual Day of Remembrance was the first event held in the new Warner Bros. Theater that touched on what Interim Director Marc Pachter often refers to as “untold stories.” In his remarks, he reflected that the event presented a perfect opportunity to inaugurate the Warner Bros. Theater not just as a space for entertainment and education, but for important cultural programs as well.