With the signing of Executive Order 9066 on February 19, 1942, President Franklin D. Roosevelt authorized the creation of designated military zones and began the process of excluding tens of thousands of Japanese Americans from these areas. Due to political pressure and national security concerns, they were uprooted from their homes and placed in remote detention camps for the remainder of World War II, where they stayed under the watchful eye of armed guards. It seems almost unimaginable now, yet these were the experiences of many Japanese residents living on the West Coast in the aftermath of Pearl Harbor.

I began familiarizing myself with this era of history during my research for the museum’s upcoming annual Day of Remembrance program, which will be held on February 18 and observes the anniversary of Executive Order 9066. The National Museum of American History’s online exhibition, A More Perfect Union: Japanese Americans and the U.S. Constitution, provided a good starting place with its large collection of historical artifacts from World War II. Personal objects from the camps, such as the arts and crafts projects of children who were interned, reveal a personal side to their story. These were ordinary civilian families making the best of their situation. Attempting to achieve a sense of normalcy, they held sporting games and dances, even as their country declared them a threat to national security.

Life continued in the camps. Spring Swing dance card (cover and inside) held at the Jerome Relocation Center. Courtesy of Juichi Kamikawa.

Acting out of wartime paranoia and an undercurrent of racial prejudice, the U.S. government specifically targeted the removal and relocation of almost 120,000 ethnic Japanese, two-thirds of whom were U.S. citizens. These Nisei – Japanese men and women born in America – had their loyalties and patriotism questioned, even though they had called this country home their entire lives. 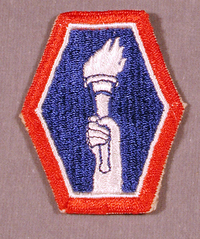 What amazes me is how these individuals did not give in to bitterness. Among the Smithsonian’s collection, I was most struck by objects from the 442nd Regimental Combat Team, a Nisei unit which served in the war despite their treatment at home. Armed with their “Go For Broke” motto, the 442nd fought in Italy, France, and Germany, and became the most highly-decorated unit of their size and length of service in U.S. military history. The unit designed its own team patch and emblazoned it with the Liberty Torch. You get a sense of the pride and sheer patriotism the soldiers felt as they wore this quintessential symbol of American hope and freedom on their arm throughout the war.

While the majority of those interned spent the remainder of World War II in camps, in December 1943, male U.S. citizens of Japanese descent were officially reclassified as draft eligible. This marked a reversal of their enemy alien status, which was given to all Nisei after Pearl Harbor, and had also declared them ineligible for military service. Following their reinstatement of service, 2,800 Nisei men were recruited from the camps.

Many Nisei were eager to join in the fight to defend freedom abroad and, ironically, at home. During the war, 25,000 Japanese Americans served, though many had families who were still interned, and many had themselves been living behind barbed wire. These men enlisted in the Military Intelligence Service and two Nisei units, the 442nd Regimental Combat Team and the 100th Infantry Battalion.

This year’s Day of Remembrance is made more poignant by the Congressional Gold Medal, recently awarded in November 2011 to all members of these three units for their service during World War II. The medal pays tribute to the dedication and many sacrifices of Japanese American soldiers who volunteered their lives, not for glory, but out of love for their country.

This medal was transferred into the Smithsonian collection on behalf of the Congress of the United States. 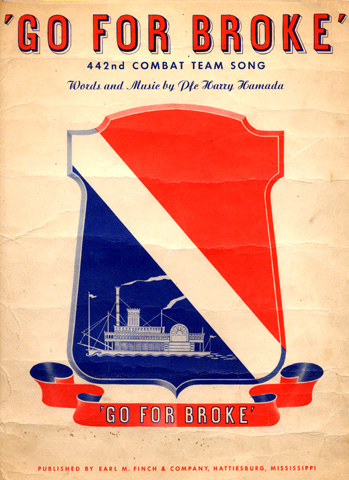 Christine Chou is an intern for the Division of Work and Industry at the National Museum of American History and the Smithsonian Asian Pacific American Program.