Eric Jentsch in our Division of Culture and the Arts shares the story of the first Beatles concert in America, which took place right here in Washington, D.C.

February 11th marks the 48th anniversary of the Beatles' first concert in America. Two days earlier, the group introduced themselves to the nation by performing on New York-based "The Ed Sullivan Show." The "Fab Four" from Liverpool were famously met by more than 3,000 hysterical and nearly riotous fans at JFK airport when they first arrived in the city.

After the concert, the Beatles headed south to Washington, D.C., to play a raucous set before thousands of ecstatic teenagers at the overbooked Washington Coliseum. 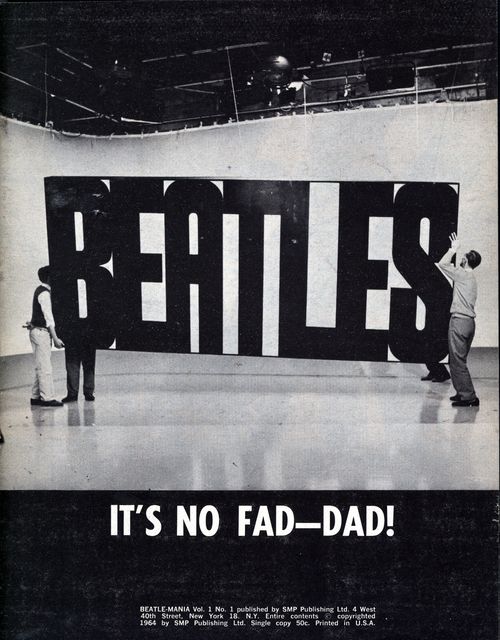 American "Beatle-Mania" was a relatively recent development. Devotion to the group came seemingly overnight, with their first song to hit the U.S. charts, "I Want to Hold Your Hand" rocketing to number one that previous December, selling more than 5 million copies in seven weeks. The Beatles then succeeded themselves at the number one spot with "She Loves You," already a hit in England.

Washingtonian Carroll James is the DJ credited with first playing "I Want to Hold Your Hand" on U.S. airwaves. The Beatles' subsequent popularity in the nation's capital inspired the band's visit to the District after their Sullivan performance. 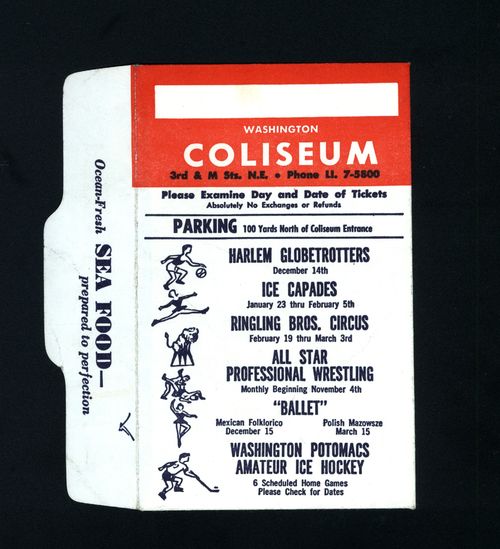 A ticket envelope from the Beatles' D.C. concert.

The concert at the now-defunct Washington Coliseum was nothing like the shows that would be staged by rock musicians just a few years later. Sub-par amplification coupled with incessant screaming from throngs of teens made the band hard to hear. The stage was placed in the center of the crowd, forcing members of the band to move their equipment around the stage during the performance in order to face each section of the audience. This was especially inconvenient to percussionist Ringo Starr, who was responsible for moving his large drum-kit about numerous times throughout the night.

None of this seemed deter the enjoyment of the hysterical crowd, whose screaming continued unabated throughout the entire performance. After sitting through opening acts The Caravelles, Tommy Roe, and the Chiffons, fans were given this set by the Beatles: "Roll Over Beethoven;" "From Me to You;" "I Saw Her Standing There;" "This Boy;" "All My Loving;" "I Wanna Be Your Man;" "Please Please Me;" "Till There Was You;" "She Loves You;" "I Want to Hold Your Hand;" "Twist and Shout;" and "Long Tall Sally."

After the appearance, the Beatles went to a party at the British Embassy. They then returned to New York to play two half-hour sets at the famed Carnegie Hall. Their performance on the Ed Sullivan program made the group the talk of the music world, compelling a return trip to the States that summer where they traveled across the country and played larger venues.

Their fantastic success created a "British Invasion" of other English artists inspired by American rock and roll, such as the Rolling Stones and the Kinks, who also found enthusiastic audiences in the United States. 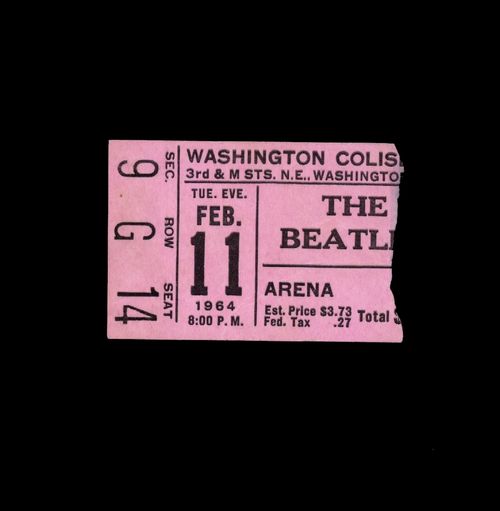 A ticket stub from the February 11 concert, donated by Patricia Mink.

A ticket stub from the Beatle's historic appearance in the Smithsonian's hometown was recently given to the National Museum of American History by long-time D.C. resident Patricia Mink, who attended the concert with her friends. Ms. Mink also included other materials from her youth, including concert programs, autographs, and sound recordings. We are thankful for these materials, as they help us tell the story of this exciting, transitional time in American popular culture. 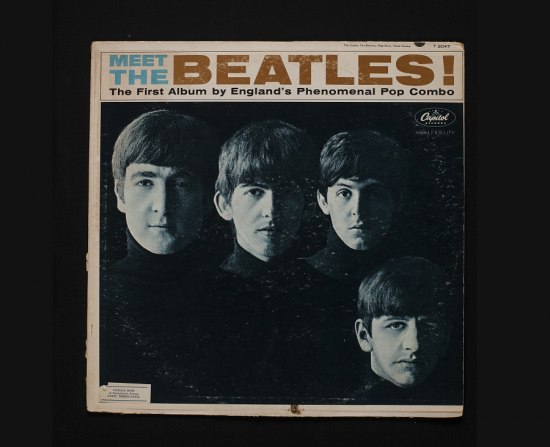 Eric Jentsch is the deputy chair of the Division of Culture and the Arts at the National Museum of American History.