I must admit I was skeptical. Very skeptical. As the new person tasked with finding compelling topics for Smithsonian Channel programs, it didn’t seem possible that a film about a 200-year-old book could be anything but, well, dusty and somewhat dry. When my colleagues suggested that I look into upcoming conservation work on Thomas Jefferson’s The Life and Morals of Jesus of Nazareth, commonly known as the Jefferson Bible, I wondered if they were hazing the new person on the team.

All doubts vanished the moment I first laid eyes on the book in the fall of 2010. The first thing that struck me is how small it is. I had expected a big, lavish volume, something like a massive and precious illustrated manuscript. This was precious too, but in a completely different way. 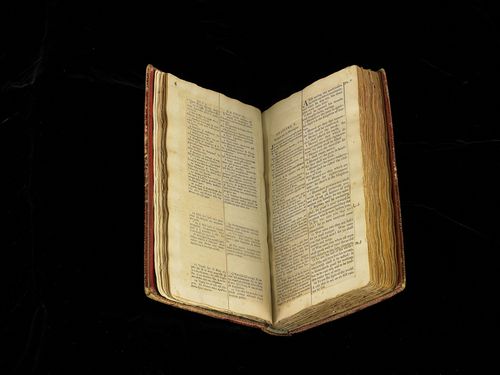 Carefully assembled at a time when books were still crafted by hand, the small artifact seemed it could speak volumes. Here, Jefferson made small notations in his own hand! Here, we see how he so thoughtfully assembled each small portion of text. What tales could it tell?

Not many, by itself that is. But through the eyes of conservator Janice Stagnitto Ellis, the book is a time machine—a physical manifestation of Jefferson’s time and place. One of the most fascinating things to me was that the ink he used was created by hand from iron galls, those odd looking bumpy balls on oak trees. (Apparently, ink was made with those since the time of the Romans!) Through painstaking analysis, Janice and her team determined that the ink varied from place to place, suggesting that it had been made at different times and thus Jefferson was writing on different days. Well, duh. But think about it—every time he picked up a pen, someone nearby had to make ink.

In our global digital age, where monitors are set to “millions of colors” and information is distributed at the push of a button, it’s fascinating to learn how Jefferson put his thoughts on paper and think about how that may have impacted his scholarship and thought. Wonder what he would have thought of Twitter. (“WWJT?” = What Would Jefferson Tweet?)

In some ways, the book is also a three-dimensional psych profile. Not only does it reflect Jefferson’s deep exploration of religion, but it is also a fascinating physical object that provides subtle and unexpected clues to his personality. I don’t want to give too much of the film away, but discussing the book’s construction with Janice was always fascinating. And the fact that it could barely be opened by the fall of 2010 was the direct result of a strong preference Jefferson had about how his books were bound. Who knew?

For several months, I came back to the office bubbling over with some new revelation, and my colleagues gently reminded me that no matter how interesting the spectral analysis of nearly 200-year-old ink is, it still had to play on TV. Luckily, we had all the elements we needed for a terrific tale. Smithsonian curators Harry Rubenstein and Barbara Clark Smith gave us new insights into Jefferson and the story of the book, and provided key introductions to dynamic scholars at University of Virginia and Monticello.

The filmmaking team of Molly Hermann and Rob Lyall brought an incredible dimension to the project with gorgeous recreations that bring the past to life. Together with their talented crew, they launched into production with gusto—and about a million cases of equipment. The wonderful staff at NMAH was incredibly gracious to allow us underfoot throughout their high-stress and high stakes project.

The resulting film goes way beyond what we first imagined it could be. And with due respect to Mr. Jefferson’s rational philosophy, I sometimes think that it’s kind of magical when things work out so well. We hope that people enjoy viewing “Jefferson’s Secret Bible” as much as we enjoyed making it.

Jefferson’s Bible: The Life and Morals of Jesus of Nazareth remains on display in the Albert Small Documents Gallery of the National Museum of American History through May 28, 2012.