For the past four years, the museum’s History Alive! Theater Program has used theater in the museum as a tool to promote dialogue on and engagement with the past. (Loyal readers of the blog will remember our posts on the Time Trials of ﻿﻿Benedict Arnold and John Brown.) Like theater in the museum, theater in the classroom can also provide opportunities for discussion, engagement, and transformation. We recently piloted a teacher workshop that invites educators to think about ways they can apply these dramatic elements to their classroom. While we can never really “step into someone else’s shoes” or really know what it means to participate in a civil rights protest, for example, we can use drama to invite students to think differently about the past and to provide a new perspective on the study of history.

At our recent teacher workshops, we conducted two types of activities: theater games and role playing. One of the theater games we used is an activity that we’ve titled “Walk Around the Room.” In the activity, participants walk around the room and imagine themselves in a series of scenarios. We started by asking participants to adopt different physical and emotional qualities, like being physically large or small or happy or upset, and then moved on to imagining some historical examples, like being new immigrants to America or settlers on the plains. The facilitator asked targeted questions like: What does that feel like? How is that expressed in your body? What are you carrying? Is it heavy? How far do you have to go with it? After each of these, the participants shared their responses and ideas for other scenarios, which included imagining soldiers from any era, civil rights marchers, and more. 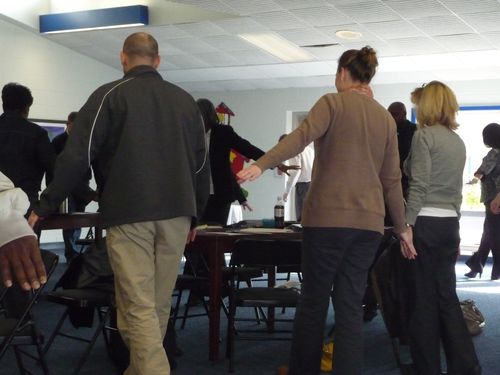 Teachers in Auburn, Alabama doing the "walk around" activity.

Next we played the “Human Machine," in which one person began making a repetitive sound and motion and each subsequent participant added a sound and motion to make one large machine. As we discussed this activity, teachers noted that it could be useful for exploring both historical concepts and team building. The first volunteers to join the machine found after a few minutes how tiring repetitive motion is and teachers suggested that this could be a useful entrée into discussing conditions in factories in the 19th and early 20th centuries. Or it could be a way to discuss communities with younger children, as each person played an important part in the larger machine.

One way to describe the effect of these activities is “embodying for empathy.” As we imagined, for example, the mix of emotions we might feel on our arrival to a new country—the fear, the hope, the anxiety, etc.—participants began to feel those emotions well up in themselves, which invited them to think differently about the topic at hand.

Role playing also provided our teacher participants with a new entry point into thinking about the past. The group participated in our Join the Student Sit-Ins program, in which they took part in a civil rights protest training session led by an actor. We then asked them to take this a step farther and imagine themselves as young college students who had actually just completed that training and discuss their next steps in the first person. We asked: What would you do? Would you protest or not? Would you tell your parents? What would the consequences be? This is a modified version of process drama, in which students are given a problem to solve and discuss it from a first person perspective, with the teacher as facilitator. While we used this method to discuss the student sit-in movement, it can be used for any topic, like the Boston Tea Party or the Constitutional Convention, for example (for more on process drama, see this resource from the museum’s Thinkfinity partner, the John F. Kennedy Center for the Performing Arts).

Teachers in our workshops noted that the activities “challeng[ed] me to think as if I was there rather than theoretically. It helped me question my thoughts.” Another noted that the program “really made me think.” One teacher wrote that “actually doing the drama helps us understand the emotions.”

We invite you to consider using these strategies in your classroom, too. You can find lessons integrating drama techniques and theater programs below or by searching on History Explorer and filtering by the subject “performing arts.” Keep us posted on how these work with your class by tweeting us at @explorehistory, or sharing your ideas in the Thinkfinity online community:

•Meet Our Museum podcast: Backstage at the Museum

Naomi Coquillon is an education specialist and Susan Evans is Daily Programs and Theater coordinator at the National Museum of American History.