Carrying the torch. . . to Helsinki, Finland!

Editor’s note: This is the eighth of a nine-part series that follows the European tour of one of the Smithsonian’s most treasured coins, the 1933 Double Eagle, affectionately known as “Our Girl.”

Reaching the end of the tour, curator Karen Lee and “Our Girl” have arrived at the last stop for the historic 1993 Double Eagle traveling display in Helsinki, Finland. The Finnish language comes from a rare Uralic group that is most closely related to Estonian and distantly related to Hungarian. "Our Girl" has certainly heard many different languages spoken during this trip, but rarest of all is Finnish. 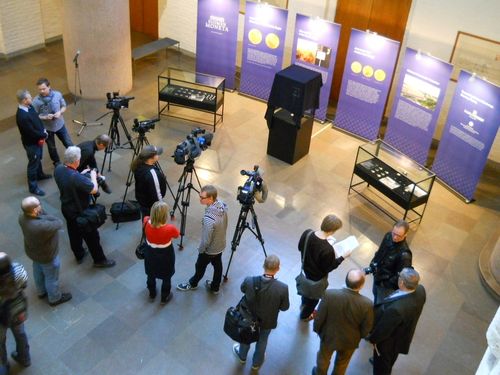 "Our Girl" getting camera ready at the National Museum of Finland

Lots of press covered the opening of the show in Helsinki and the news of our arrival even reached the Arctic Circle. 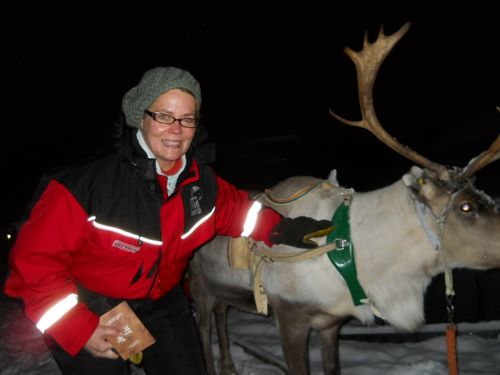 Karen spent a fun day with reindeer while "Our Girl" entertained the crowd at the National Museum of Finland. Lee and the coin will return home to the Smithsonian soon.

With “Our Girl” in Helsinki, the interns went searching for Finnish coins in the National Numismatic Collection, and found this exciting tidbit.

The Finland 500 markkaa, commemorating the 1952 Helsinki Olympics. “Suomi,” inscribed on the reverse, is actually Finnish for “Finland.” The markkaa was the first unit of Finnish currency. As part of the Russian empire, they had used the Russian ruble before 1860.

The Olympics! The running of the torch! The ceremonies! The gold medals! Doesn’t it just make you want to jump on a set of parallel bars, or run a marathon, or learn to bobsled? “Smithsonian, we have a bobsled team!” Ahem. Sorry about that.

In 1952, Helsinki finally got its chance to host the Olympics. The city was slated to host the Olympics in 1940, but the games were canceled when World War II broke out, and Finland soon had its hands full fighting off a Russian invasion. In 1939, the Soviet Union invaded Finland, seeking to reclaim its former province and gain some Finnish territory. After the two countries made peace, Germany sent troops to help defend Finland when the Soviet Union attacked again in 1941. The Finns found themselves fighting to force out their former allies after a second treaty with the Soviets, and the last German troops left in April 1945.

The 500 markkaa commemorative coin was the first coin minted in honor of an Olympic event since the rebirth of the Olypics in 1896-and there were a lot of other firsts at these games. The USSR and Israel participated for the first time in the 1952 Helsinki games. New rules allowed women to enter and compete alongside men in a number of “mixed” equestrian competitions. And did we mention that more world records were broken at the 1952 Olympics than at any previous games (until the 2008 Summer Olympics in Beijing, that is)? That’s a lot of firsts!

In 2002, Finland minted this 10 Euro coin to commemorate the 50th anniversary of the 1952 Helsinki games, keeping the memory alive.

﻿On the front, or “obverse,” is the Olympic Flame above the globe. On the back, or “reverse,” is the Helsinki Olympic Stadium and the 1952 markkaa coin.

Would it be too much to ask the Smithsonian to create a commemorative coin in honor of the 1933 Double Eagle Tour? Or at least a plaque? Maybe a tee-shirt?

It seems like so long ago that ”Our Girl's" tour began! Making stops in London, Dublin, Brussels, Prague, Warsaw, and Oslo, Lee and “Our Girl” have criss-crossed Europe, charming new audiences, seeing beautiful cities, taking amazing pictures, and sharing an iconic piece of American history with the rest of the world.

Karen Lee and “Our Girl” reached more than 50 million people through TV, radio, and newspaper coverage, and any thousands of exhibit visitors. Once they are back in the National Numismatic Collection, safe and sound, we will wrap up with an “Our Favorite Memories” post, sharing how far this project has come.

We’re sad that the excitement is over, but we’ll be glad to welcome them home!