From the mouth of a 13-year-old visitor, wisdom flows

So there I was, in my self-assigned corner of Flag Hall, half-anxious and half-excited to share my knowledge of carnaval in Puerto Rico with whichever museum visitors decided to wander over to my educational cart. I set up the colorful and devilish papier-mache masks in front to attract curious little ones, followed by a güiro (an instrument native to Puerto Rico), tambourine, map of Puerto Rico, photos of carnaval celebrants, and something called a vejiga, which is actually a dried-out, inflated, balloon-like cow bladder used to whack the evil spirits off people’s shoulders. In terms of educational cart experiences, the day was going very well—I had a lot of interested and engaged visitors, but my last encounter of the day would top them all—in the best way possible. 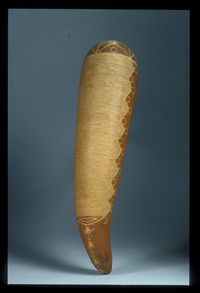 A traditional güiro is made from gourd-like fruit of the higüero tree (Crescentia cujete) that is native to the region. This musical instrument, common throughout the Caribbean, takes on various forms and can be made from modern materials like metal or plastic. A musical instrument of Pre-Columbian origin, it is played by scraping the carved ridges with the tines of a special pick or scraper. This güiro is a part of the Teodoro Vidal Collection.

But before I relate that experience, I want to mention a current event that makes this story relevant. Today, a bus-load of school books that used to be read as part of the Tucson Unified School District’s Mexican-American ethnic studies program will be “smuggled” back across Arizona state lines by a group of activists, authors, educators, and students as part of the Librotraficante Caravan. (“Librotraficante” literally means book smuggler in Spanish.) The caravan, which will carry boxes of books including, Critical Race Theory by Richard Delgado; Chicano! The History of the Mexican Civil Rights Movement by Arturo Rosales and Rethinking Columbus: The Next 500 Years by Bill Bigelow, leaves Houston on Monday, travels through Texas and New Mexico and concludes in Tucson, Arizona.

Tucson Unified School District recently stated that these books are not banned from the classroom, but were only removed and placed in storage because the courses they accompany now violate a ban on certain ethnic studies in Arizona and are no longer taught. Now, regardless of which side of the political fence you fall on when it comes to immigration issues or the growing visibility and importance of Latinos, the unfolding of events in Arizona and other states underscores the increased visibility of something I’ve come to call “otherism” in the United States. It’s the idea that we’re all in a battle of us versus them, whomever “us” and whomever “them” are. This goes beyond immigration or ethnicity issues, presenting itself in terms of class (Example: “Oh, well that’s very 1% of you…”) and religion.

For those using a plethora of “otherisms” (maybe without even realizing it) our diversity of experience, background, perspectives, and culture is just cause to make us more suspicious of each other. What becomes implied is that diversity will become disunity and weakness. The opposite of this sentiment is something I call—since my encounter with this special museum visitor—“rainbowism.” And that brings me back to a boy I’ll call “Derek.” 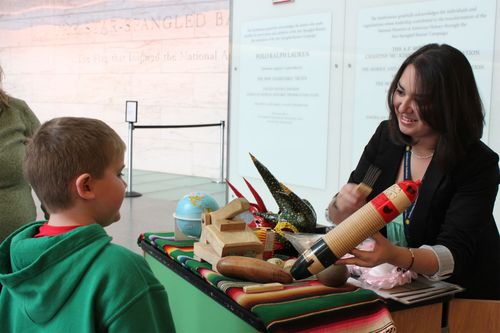 Vanessa and her educational cart.

As I mentioned earlier, I was getting ready to pack up my cultural, puertorriqueño (Puerto Rican) wares of the day, when a group of seventh-grade boys on a school trip from Dallas, Texas approached me. I talked to them a bit about the objects, and then one of the boys said to me, “I have a lot of respect for Latinos.”

I’m not making this up and I’m not paraphrasing. This 13-year-old, wiry, bespectacled kid really said this incredibly insightful and perceptive thing to me. I proceeded to ask him why that was and he responded by saying that Hispanics, like other minorities, face a lot of hurdles but they continue to share their culture, including food, music, and religion with and in America. As if he hadn’t already impressed me enough with his young, open mind, “Derek” then said, “America is like a rainbow because there’s all kinds of people who live here and that’s what makes us so great.”

Right there, in the corner of Flag Hall, at about 4:15 in the afternoon, I had a sense of renewed hope for the future of this nation. If this is how 13-year-olds are thinking about diversity in America and they are our future senators and judges, CEOs and teachers, parents and voters, then perhaps we’re headed in a really positive direction. Amidst negative media reports and divisive rhetoric from politicians and pundits, it was incredibly refreshing and encouraging to hear this young man say the things he did to me around my Latino and immigration-themed educational cart.

Maybe because I’m a product of a liberal arts education de la frontera (from the border) in El Paso, Texas or maybe because I grew up near Ft. Bliss, Texas, a military base that’s a magnet for diversity, but I truly believe that this nation can and must function as a place that appreciates all its multi-colored, “rainbow” people—and so do a few 13-year-olds, apparently.

Vanessa Marie Juarez is an intern for the Program in Latino History and Culture at the National Museum of American History.