Many of us at the National Museum of American History were saddened to hear of the passing of Maersk Mc-Kinney Møller on April 16. Mr. Møller was a Danish businessman who built the company founded by his father into the world’s largest shipping conglomerate, A. P. Møller-Maersk. At age 98, Mr. Møller lived a long and tremendously productive life, with many business and philanthropic successes. Among the latter, we count the museum’s maritime history exhibition, On the Water: Stories from Maritime America, which was made possible by a generous gift from the A.P. Møller and Chastine Mc-Kinney Møller Foundation. The exhibition opened to the public in 2009.

Why would a Danish shipping executive take such an interest in an exhibition project at the Smithsonian? Mr. Møller’s long career in global maritime commerce notwithstanding, he also had strong ties to the United States—his mother was an American—and a special interest in American history. During World War II, as Denmark was occupied by the Germans, his father sent him to New York, where he ran the company until the end of the war.

After Mr. Møller personally informed us of the foundation’s generous gift, he made a visit to the Smithsonian in 2007, during one of his business trips to the United States. Yes, at 93, he was still very active in the company, and arrived for our meeting in the company of several Maersk executives. Because the American History Museum was closed for renovations, the meeting took place at the Castle, with Acting Secretary Cristián Samper as host. 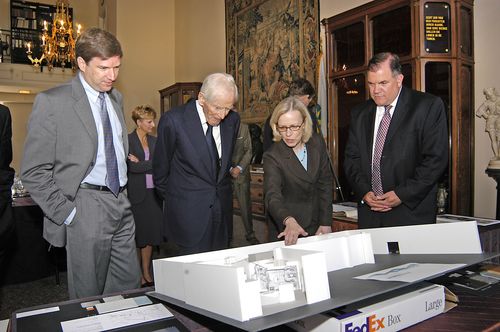 Cristián Samper, Mr. Møller, Paula Johnson, and Russ Bruner, President and CEO of Maersk, Inc., discussing plans for the exhibition “On the Water,” May 2007. Photograph by Richard Strauss 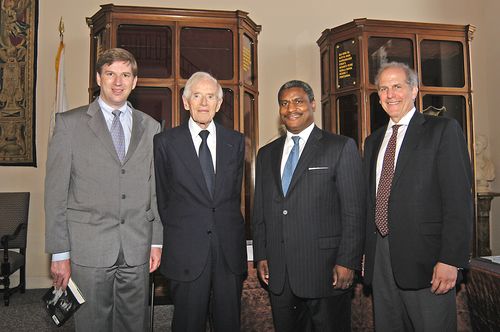 Following lunch, Mr. Møller listened attentively to my presentation and examined every design drawing, artifact, and document we brought as background information about the exhibition. As I showed him a photograph of a Liberty Ship under construction at an American shipyard during World War II, he said he was heartened to see we were telling the story about wartime shipbuilding because it was such a tremendous achievement. He added, “I’ll never forget what the American people did” to help win the war. At that moment I understood why he decided to support the “On the Water” project at the Smithsonian: his support would allow us to fulfill our mission of sharing important stories from our nation’s history with the public. 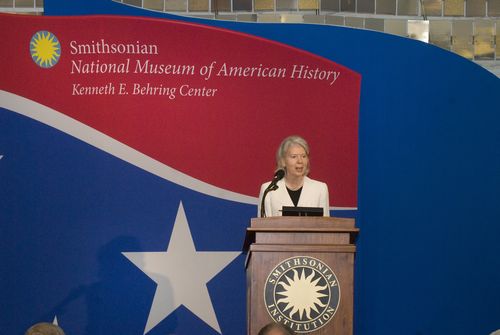 Mrs. Ane Maersk Mc-Kinney Uggla at the dedication ceremony opening the “On the Water” exhibition at the National Museum of American History, May 22, 2009. Photograph by Richard Strauss

When we opened the exhibition on May 22, 2009, National Maritime Day, we were honored to have Mr. Møller’s daughter, Ane Maersk Mc-Kinney Uggla, in attendance, as well as Mr. Henrik Tvarno, the director of the A. P. Møller and Chastine Mc-Kinney Møller Foundation. Although he was not able to attend, Mr. Møller was certainly present in our hearts and minds. Now, our immense gratitude to him remains, and is matched by our sincere condolences to Mr. Møller’s family and the many Maersk employees and associates around the world.

Paula Johnson is a curator at the National Museum of American History.