Signs from the past - Part 2

Editor’s note: This post is the second in a two-part series on the history of neon signs.

Trying to identify the two neon signs in our collection was proving difficult. The accession file had no information and my initial look at online resources came up empty. I decided to see if I could identify “Sperling” and found a newspaper article identifying him as Edward O. Sperling, a technician at the United States Bureau of Standards (NBS – now the National Institutes of Standards and Technology). That led me to a history of NBS by Rexmond Cochrane that unlocked the mystery.

After describing the Bureau’s work at the 1904 Exposition, Cochrane wrote a footnote:

“Dr. Nutting’s neon signs—two special glass tubes blown by Mr. Sperling in the Bureau shops, one reading ‘HELIUM,’ the other ‘NBS’—resulted from a modification he made in the laboratory instrument known as the Plücker tube and reported in NBS Scientific Paper No. 6, …. Although never made public, the neon phenomenon has long been considered the Bureau’s first notable laboratory accomplishment, and the forerunner of modern neon signs and fluorescent lamps. Interview with Dr. William F. Meggers, Aug. 4, 1964.”

Here was the answer to how the signs were used in St. Louis and the connection to William Meggers. Perley Nutting displayed the signs at St. Louis to publicize interesting research results. Afterwards he apparently put the signs aside. At some point Meggers, a physicist who went to work at NBS 10 years after the Exposition, must have saved the signs. 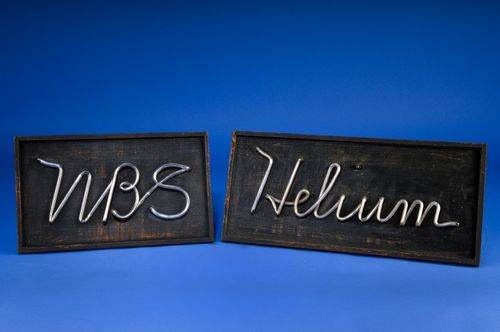 Does this mean that we need to rewrite the history of neon signs? Not exactly. There’s an old debate about invention. Who’s the inventor? The person who first demonstrates something? The person whose work results in something becoming used and useful? In this case we need to put Nutting and Sperling’s signs in historical context.

In the 1890s several inert gases were discovered, but isolating them was expensive. The tubes Nutting designed in 1904 could not have been mass-produced economically due to the cost of the gas. In 1907, Georges Claude invented an economical way of liquefying air and separating out the various gases, and then designed a new electrode that gave superior performance in his tubes. He then began selling tubes for lighting.

So while one cannot say that Claude made the first neon sign, it’s perfectly acceptable to credit him with inventing neon signs suitable for practical use. His work on inexpensive extraction of inert gases from air and his electrode design laid the foundation for the neon-lamp industry. Nutting and Sperling’s signs showed what was possible but literally became historical footnotes.

History is not static and is rarely crystal clear. In many ways the past is as difficult to see as the future. Our knowledge is imperfect and new information can crop up at unexpected moments. Those moments, however, enrich our understanding of the past and make working here at the museum exciting.

Hal Wallace is the associate curator of the Electricty Collections at the National Museum of American History.  ( Download references)