The true meaning of voice

Editor’s note: Today’s post is written by a student at Gallaudet University in Washington, DC. This spring, Professor Amy Stevens’ civil rights course at Gallaudet attended a performance of Join the Student Sit-Ins in the museum.

Imagine having separate churches, separate deli shops, and even separate bathrooms for two races—whites and blacks—in 2012. It is amazing how historical events are responsible for what we are able to access as a whole community today.

Our civil rights class traveled to the National Museum of American History to get a better understanding of the student sit-in protests that happened in 1960 in Greensboro, North Carolina. This matched our course objective: to look at historical events and see how they impact us today.

The event nationally known as the “Greensboro Sit-In” was a time when students knew it was their chance to fight for social change in a non-violent manner. Their intentions were not only to benefit their community, but for the entire nation to gain equal access instead of having “separate but equal” facilities. If these civil rights activists did not take a stand, we would continue having “separate but equal” situations.

The performance of Join the Student Sit-Ins was a phenomenal experience for me as a college student. At the beginning of the demonstration, the actor playing the role of a female student organizer asked the audience for four volunteers to sit in the “sit-in” chairs. She then had the remaining audience (about 50-60 people) approach the four volunteers and stand as close as possible to each of them. This created an uncomfortable environment full of emotions. Imagine that many people breathing down each volunteer’s neck. 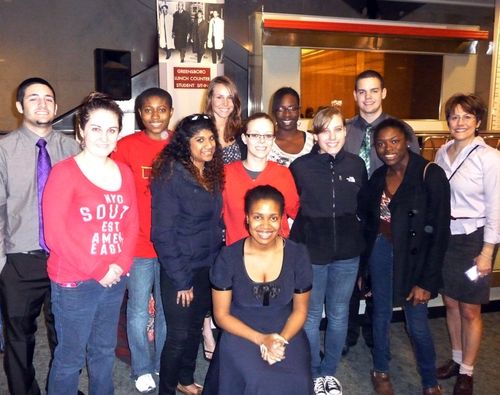 Amy Stevens’ Gallaudet University class with actor Lauren Davis. The author is second from the left in the front row.

In the performance, “voice” is obviously emphasized as an important tool. As Gallaudet students looking back at our own deaf history, the deaf community has fought for its own voice throughout history. For example, in 1988 students at Gallaudet united to fight for “Deaf President Now.” We wanted an ASLpresident to lead the university. Through student-led protests, Gallaudet appointed its first deaf president in the university’s 124-year history.

In retrospect, I personally cannot forget when the actor told us, “You can actually die just by peacefully protesting.” Your life is at risk, just for standing up for the community. Join the Student Sit-Ins exceeded my expectations and the performance was more memorable than a regular walk through the museum.

Thanks to Professor Stevens, who encouraged us to witness the performance. Also thanks to the actor who did such an amazing job helping us find our own connections to the history of the sit-in protests.

Tiasha Bera is a student at Gallaudet University in Washington, DC.