The "War Horse" of the Civil War

Recently, Steven Spielberg released War Horse, a film that is based on a young adult novel by Michael Morpurgo. It tells the story of Joey, a Thoroughbred horse, who is sold by his owner to the British Army at the start of World War I. Joey experiences the horror of that war, first as a cavalry horse for the British, and then as an ambulance puller and artillery mover for the Germans. The unique concept of the book is that the story is told from Joey’s perspective. Reading the book, it struck me that the museum has its very own “War Horse”, and that his story is equally as heroic as Joey’s. Here’s Winchester’s story, in Winchester’s voice:

“I was foaled near Grand Rapids, Michigan, late in the fall of 1859. My bloodlines are those of the famous Morgan trotter Black Hawk, whose sire was a son of the first Morgan horse, Justin Morgan. I was brought into the service by an officer of the Second Regiment Michigan Cavalry of the U.S. Army in 1862, when I was almost three years old; I was named Rienzi after the town of Rienzi in the state of Mississippi, where the regiment was stationed when I was presented to the colonel of the regiment, Philip H. Sheridan. My first impression of Sheridan? He wasn’t a very big man, which suited me just fine. I was big for a Morgan, 16 hands high and strongly built, but even so, you can run a lot faster when you’re carrying less weight. Maybe that’s why I was able to make that dash from Winchester to Cedar Creek in time to rally the troops. 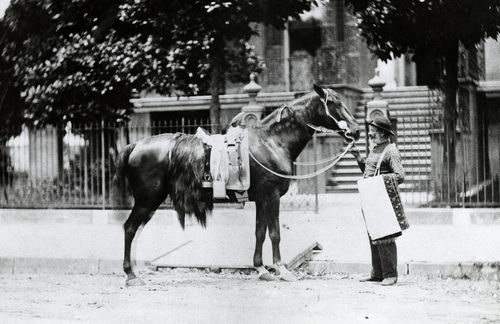 Winchester in Washington, DC, after the war

That dash from Winchester to Cedar Creek happened in October 1864; before that, General Sheridan and I participated in a number of engagements, including Perryville, Stones River, Chickamauga, the Wilderness, Yellow Tavern (where that dashing Confederate cavalryman, Jeb Stuart, was killed), and Cold Harbor. I was wounded at Stones River, and again at Missionary Ridge and Fisher’s Hill, but the wounds were not serious. I maintained a level head and steady nerves through all of that. But my finest hour came on October 19, 1864, when the Confederates under Jubal Early engaged the Army of the Shenandoah at Cedar Creek. “Little Phil” and I returned from Washington, D.C. the evening before, and spent the night in Winchester, Virginia; when the sound of distant artillery could be heard at dawn the next morning, we sped off to the battlefield. Being fleet of foot, I covered the 15 mile distance in several hours, and we arrived at the battlefield around 10:30 am. We rallied the troops and repulsed the Confederate attack. Victory was ours!

I became something of a celebrity after that. The poet Thomas Buchanan Read wrote a poem entitled “Sheridan’s Ride.” My favorite stanza goes like this:

Hurrah! hurrah for horse and man!

And when their statues are placed on high

Under the dome of the Union sky,

The American soldier's Temple of Fame,

There, with the glorious general's name,

Be it said, in letters both bold and bright:

"Here is the steed that saved the day

By carrying Sheridan into the fight,

In honor of the Union victory, my name was changed from “Rienzi” to “Winchester”. Personally, I still considered myself “Rienzi”. I was in attendance at Appomattox Courthouse on 9 April, 1865, when Confederate General Robert E. Lee formally surrendered to General Grant, and the Civil War was officially over. I retired after the war and spent my remaining years in Chicago with my master.” 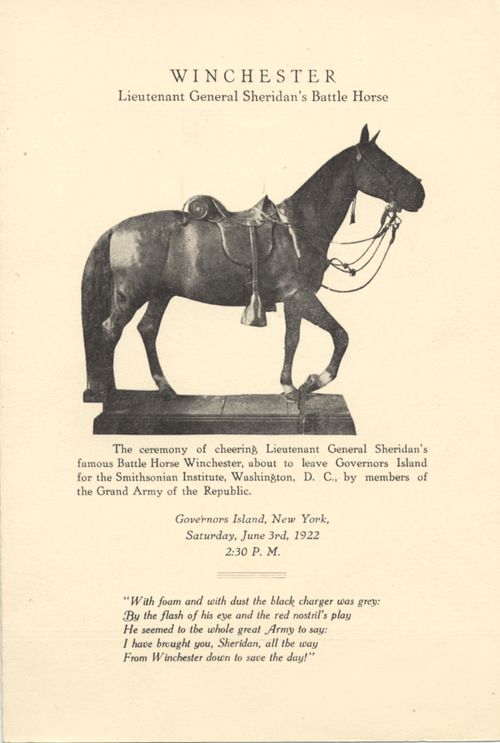 Program for the farewell ceremony

Winchester (or Rienzi) died in October 1878. Sheridan had him preserved and mounted, and presented him to the Military Service Institution, Governors Island, New York, in 1879. He remained on display there until 1922, when a fire in the museum forced the Military Service Institution to transfer a number of artifacts, Winchester included, to the Smithsonian's National Museum. A ceremony was held on Saturday June 3rd, 1922, at Governors Island, where members of the Grand Army of the Republic cheered Winchester as he was ready to leave Governors Island. The event was covered by numerous newspapers.

Upon his arrival at the Smithsonian, Winchester was placed in the west gallery of the National Museum (these days known as the Arts and Industries Building). He remained there until the Museum of History and Technology opened in 1964. At that time, Winchester became a fixture in the Armed Forces Hall, where he remained in his glass case for 40 years. 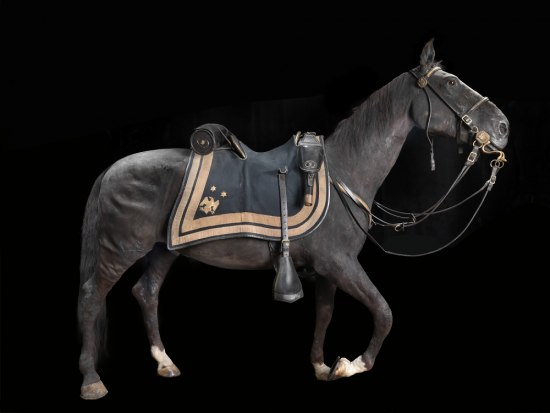 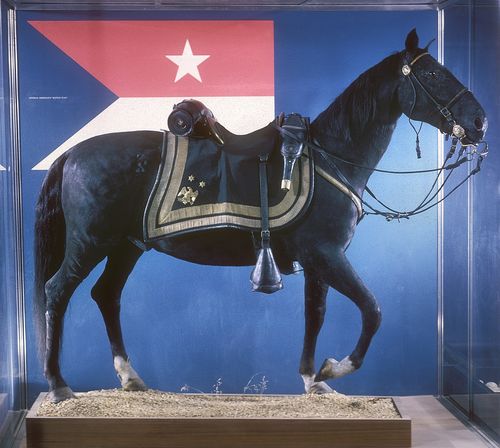 Winchester on display in the old Armed Forces Hall, NMAH

In 2004, the museum opened a new exhibition on military history, “The Price of Freedom: Americans at War”. It was inconceivable that we would not include Winchester in the section on the Civil War; after all, there is some truth to the idea that he helped win the war. If Sheridan had not arrived at Cedar Creek in time to rally his troops and push the Confederates from the Shenandoah Valley, the Confederates might have gathered momentum and posed a real threat to Washington, and the war might have had a different outcome. He is on display in a case with other memorials of the war: relics from the battlefield at Gettysburg, presented to Winfield Scott Hancock in 1885; Grand Army of the Republic and Confederate Veterans badges and ribbons. Memorialization of the Civil War began shortly after the end of the war, with the formation of veterans groups on both sides. Later on, it was extended to the erection of monuments to the dead and statues of the heroes, and the creation of parks on the battlefield sites. Veterans groups, most notably the Grand Army of the Republic, began holding encampments. When Winchester died, it was in this spirit of remembrance that Sheridan had him preserved. 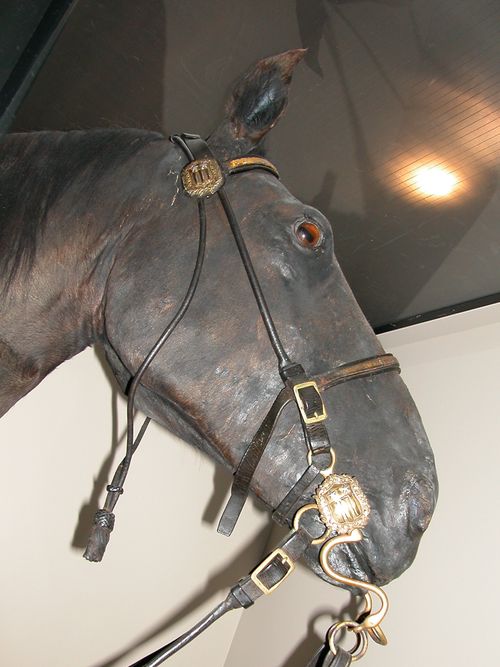 Winchester in “The Price of Freedom” exhibition

Kathleen Golden is an associate curator in the Division of Army Forces History. 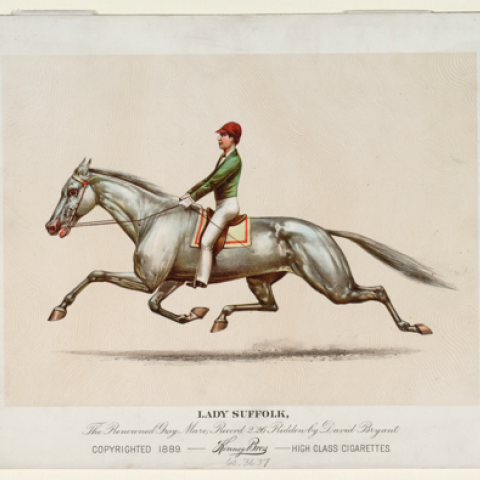 Four-legged 19th century star athletes: Endorsement deals, paparazzi, and glory
In honor of the running of the Hambletonian Stakes, a major event in American Harness Racing, on August 2, intern and equestrian Ariel...