Sometimes an ordinary object becomes important primarily for the story it has to tell. A ceramic cookie jar, for instance, may have been mass-produced during a specific point in American history, meaning that thousands of similar pieces were found in homes across the United States. But add in a crucial component—a family history set in World War II—and the object gains a historical depth beyond the details of how and where it was manufactured. 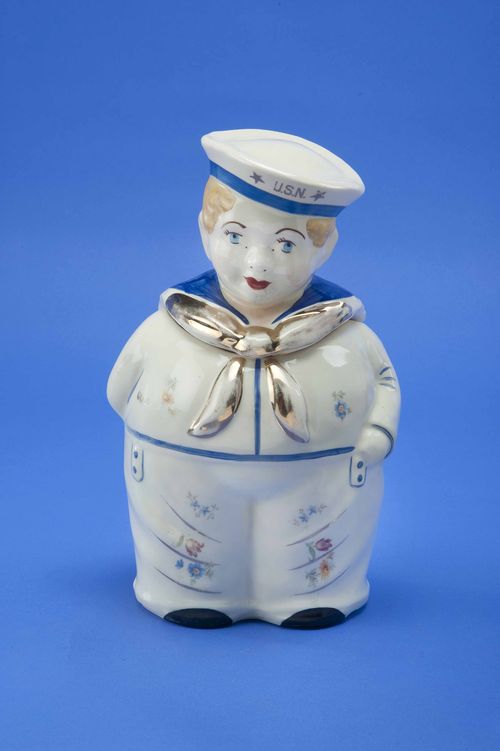 The “Sailor Boy” Cookie Jar – a popular figural design manufactured by the Shawnee Pottery Company from 1942 to 1961.

The cookie jar in this example is, of course, an actual object—a recent acquisition for the museum. Our ceramic jar features a young boy in a sailor uniform, complete with hand-painted blond hair, a gilded neckerchief, and the gilded abbreviation “G.O.B.” The Ohio-based Shawnee Pottery Company sent blank wares like this sailor to China for decoration; the “G.O.B” is a shortening of “gob-bid-dan,” the Cantonese term for a sailor. 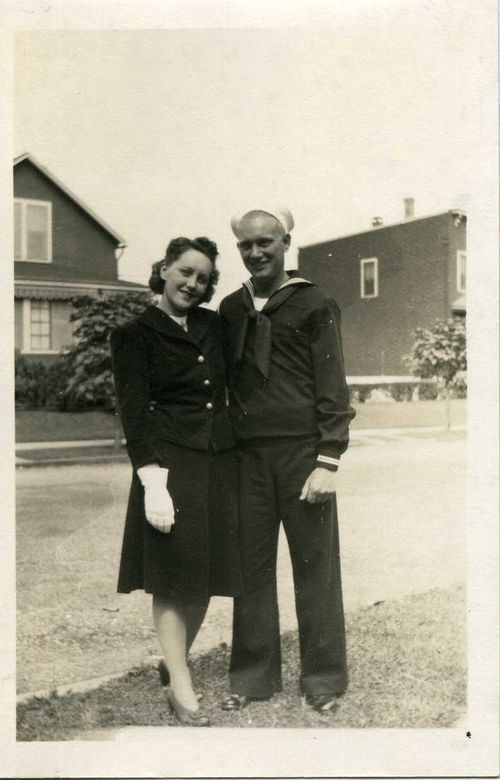 Georgine Miller Dell (1916 – 2008) and her husband Edward John Dell (1911-1978). After his return from WWII, Edward moved his family to Mahopac, New York, where he and Georgine single-handedly built their family home.

The cookie jar was given to young Georgine Miller Dell by her Parkchester, New York, Macy’s coworkers when her husband, Edward John Dell, shipped out with the U.S. Navy in 1943. Their daughter Laura, who donated the cookie jar to the National Museum of American History, explained, “I know that we never used the jar for cookies! It usually sat on the top of the fridge and was used to store newspaper clippings about the family.”

So a cookie jar begins the conversation that reveals the following about its owners: Edward John Dell served as a shipfitter on the naval ship USS LST-471, which served in the South Pacific in 1943. The postcards he sent home to his wife are charming and conversational: “I just had a couple of hot dogs and pie a la mode and a big cup of hot coffee and boy did that hit the spot.” After the war, Edward worked as a plumbing contractor to support the family home that he and Georgine physically built themselves. Georgine took Laura for visits to the Macy’s in Parkchester where the salesgirls called her “Little Miss Macy.” 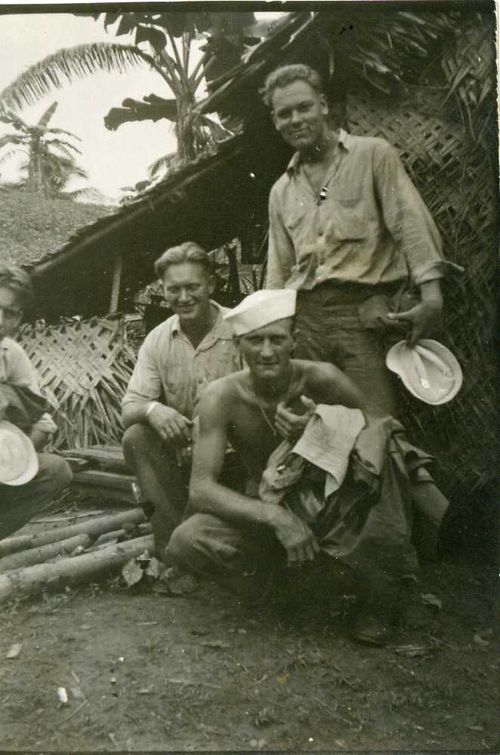 Edward John Dell (second from left) pictured with fellow sailors in the South Pacific, where Edward served as a Shipfitter 2c (T) aboard the USS LST-471.

The little sailor boy’s complacent smile reminds us that although he is not one-of-a-kind, he is unique. Thanks to him, an entire family’s history will become an integral part of the National Collections.

Yana Myaskovskaya is a masters candidate in the History of Decorative Arts at the Smithsonian Institution–George Mason University program and is working as a research assistant in the Division of Home and Community Life at the Smithsonian's National Museum of American History.