Girl Scouts of the USA was born one hundred years ago when its founder, Juliette Gordon Low, brought eighteen girls together in Savannah, Georgia to form the first troops. Since that date, it is estimated that nearly 50 million girls and women have participated in scouting. Here at the National Museum of American History, there are many proud Girl Scout alumnae who work in a variety of roles. As the curator responsible for the Museum’s scouting collections, I’ve invited them to share their memories and experiences to coincide with the opening this week of an exhibiton marking a century of Girl Scouts.  Watch this space for more stories about scouting from Smithsonian women.

A Family Affair in More Ways Than One
Jenny Wei, Education Specialist

I’ll admit it: The start of my twelve-year career in Girl Scouting had more to do with sisterly jealousy than anything else. My mom took time to make up activities for my big sister’s troop, they got to stay at school even after the teachers left, and I was enchanted with the adorable blue Daisy’s apron. In fact, I insisted on going to every one of my sister’s troop meetings. And when my mom explained that I was too young to be a Daisy myself, I insisted I was a Seedling Scout.

But the following year, when I was old enough to be a “real” (registered) Girl Scout, my mom made a Daisy troop for me. And then she led us in three great years of crazy campouts, badge activities, and cookie sales. I remember one year when we filled the entire garage with Girl Scout cookies sold by the combined efforts of my sister’s troop and my own troop. It was only a one car garage, but that’s still a whole lot of cookies. 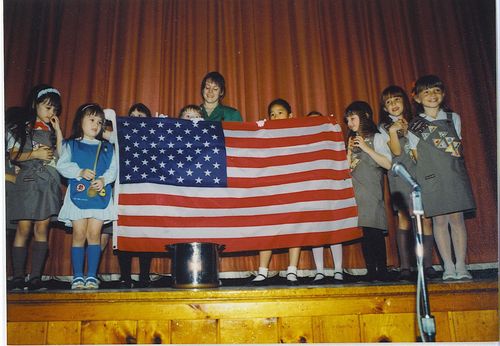 The women of my family at a Girl Scout ceremony: my sister far left, me in the blue and my mom mid-flag in green. The ceremony involved mixing red, white, and blue poker chips into a soup pot and pulling out the American flag.

Midway through elementary school, I moved to a new town and joined a new troop which I stayed with through the end of high school. My mom wasn’t my troop leader any more, but the other girls in my troop were definitely part of my extended family. Probably the most memorable moments in my later scouting years were our Halloween and Christmas traditions: carving dozens of jack-o-lanterns for a nearby park’s spooky trail and decorating cookies for our school’s support staff.

Girl Scouts helped me build relationships across many circles: a bond with my mom and sister, tight-knit friendships that survived middle school cliques, and ways to contribute to my community.

My Girl Scout years were in the late 1960s and early 1970s, when times were a changing. But there wasn’t much change in my hometown in Southwest Virginia. Girls were still taught to be “ladies.” Girls in Roanoke’s public schools had to follow a strict dress code – dresses only in elementary school and no pants until high school. At school, exercise was limited to recess until a gym was built when I was in the 6th grade. There were never any teams for girls’ sports during my entire public school education. During recess I ran and played in a dress or in athletic bloomers down to my knees. 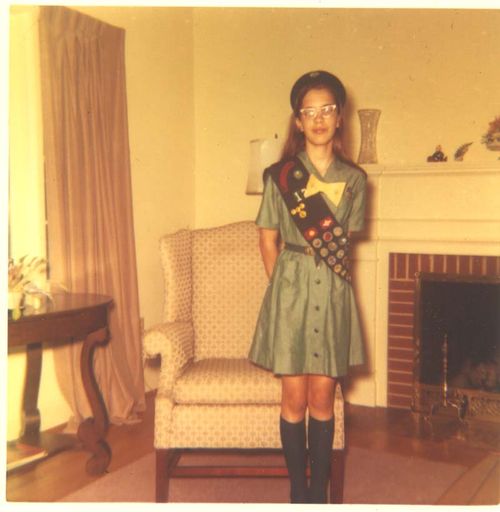 But Girl Scouts were different. My Troop Leaders saw girls in a way counter to traditional Southern culture. From the beginning, there was physical activity. The uniform, while still a dress, wasn’t the slim 60’s skirt. Nor was the length enforced (two inches above the back of the knee) as it was in my elementary school. I could run in my uniform, and I did. I loved wearing it.

My scout leaders encouraged us to add our own clothing to the uniform, so pants and shorts were worn during the weekly meetings. We were outdoors as often as possible, not just during camping. We jumped, we worked out on the jungle gym, we had races, and we played baseball and kickball and dodge ball. In pants. 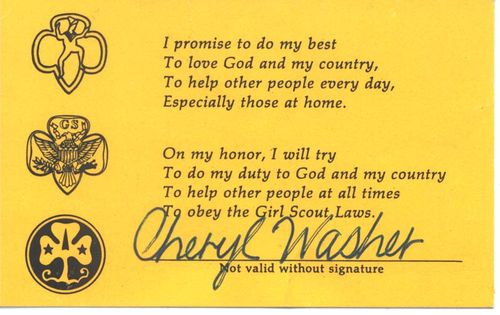 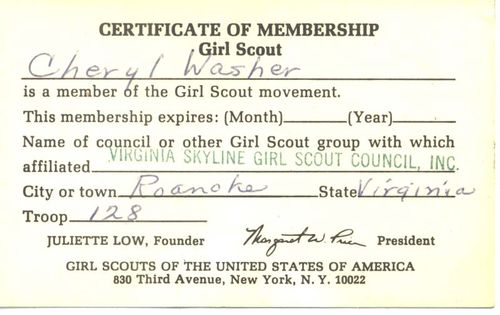 Yes, we learned to knit and sew and the importance of “good grooming” and all of that other stuff associated with “being a lady”, but we also learned to use and own a knife and a compass and how to make fires. We went to the airport to hear about flying (my uniform sash has an aviation badge). We were encouraged to explore many paths on our journey to adulthood.