You may have never heard of Alice Paul, but when you cast your ballot this election season, say a quiet thank you to the person who did so much to win women the right to vote.

Alice Paul came to Washington in 1913 determined to change the established landscape of the suffrage movement that concentrated on winning the vote one state at a time. In just a few weeks she put together a pageant and parade that marched down Pennsylvania Avenue, demanding a Constitutional amendment giving women in the United States the right to vote. The parade took place on March 3, the day before Woodrow Wilson’s inauguration, effectively putting the incoming president on notice that a new generation of woman suffragists was quite literally moving forward. The day was marred by violence from hostile crowds, prompting a Congressional investigation into the D.C. police’s protection of the marchers, but the event and its aftermath made headlines. And headlines, bringing public attention, public debate, and possibly public support and pressure, were exactly what Alice Paul wanted. For seven years she kept the demand for woman suffrage squarely in the public and presidential eyes in demonstrations that eventually escalated to picketing the White House and burning President Wilson’s speeches. When her tactics became too “radical” for the National American Woman Suffrage Association, she formed the National Woman’s Party and continued on.

Paul’s life had prepared her for this work. Born in 1885, her Quaker upbringing taught her that men and women were equals. She earned advanced degrees in sociology but was frustrated by the slow progress of social work. To remedy the problems of poverty, health, and education required changing laws—and changing laws required the votes of women. Paul worked for woman suffrage while in college but it was during her graduate studies in England that she became exposed to the confrontational tactics of the English “suffragettes.” When she returned to the United States she was ready to adapt their tactics for an American audience.

The most dramatic episode of Paul’s suffrage battle is illustrated by two small objects in the museum’s collection—a small silver pin in the shape of a prison door with a heart for a lock and a torn fragment of yellow fabric. Such delicate objects to commemorate such outsize courage. In January 1917, discouraged by President Wilson’s continued opposition to the suffrage amendment, Paul posted pickets at the White House gates—the first people to ever picket the White House. These “silent sentinels” stayed on duty in all weather and in the face of threats, taunts, and physical violence. Using their banners and their quiet courage they asked, “Mr. President How Long Must Women Wait for their Liberty?” and “Mr. President What Will you do for Woman Suffrage?” Hoping to provoke a response, the language on the banners became more inflammatory. They used the president’s own words against him and pointed out the hypocrisy of his leading the country into the first world war to defend freedom while denying it to the women of his own country. 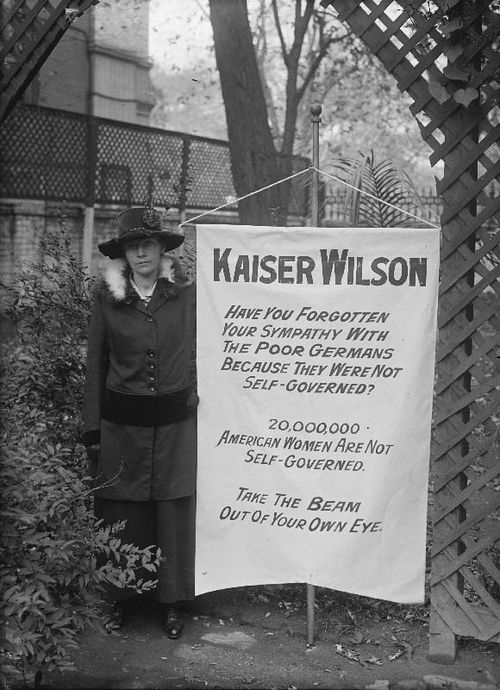 “Kaiser Wilson” protest banner, courtesy of the Library of Congress 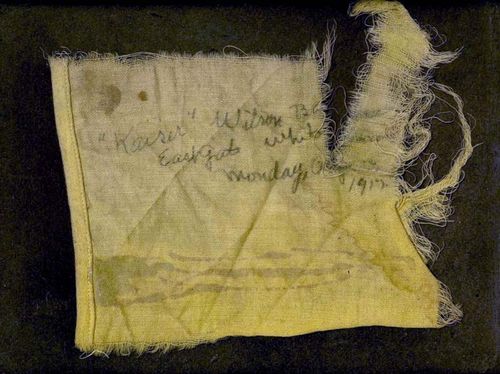 Scrap of the protest banner in the Museum collections

Crowds who believed the pickets’ activities were disloyal in a time of war attacked the suffragists and destroyed their banners. In July the police began arresting the pickets for “obstruction of traffic.” When they refused to pay fines they were imprisoned. When they went on hunger strikes to demand the rights of political prisoners they were forcibly fed—a painful and invasive procedure. The pickets continued despite the risk. Paul had endured such treatment while she was in England. Although she knew what lay ahead and that she, as the organizer of the picketing, would receive a harsher sentence, she insisted on taking her place on the picket line. She was arrested in October. While in jail she was forcibly fed and threatened with commitment to an insane asylum. Reports of the long sentences, abuse, and the courage of the suffragists became public and all prisoners were released in November. In a December ceremony the imprisoned suffragists were awarded the silver “jailed for freedom” pins. Physically weakened by the ordeal but determined to prevail, Paul and her sister suffragists fought on. 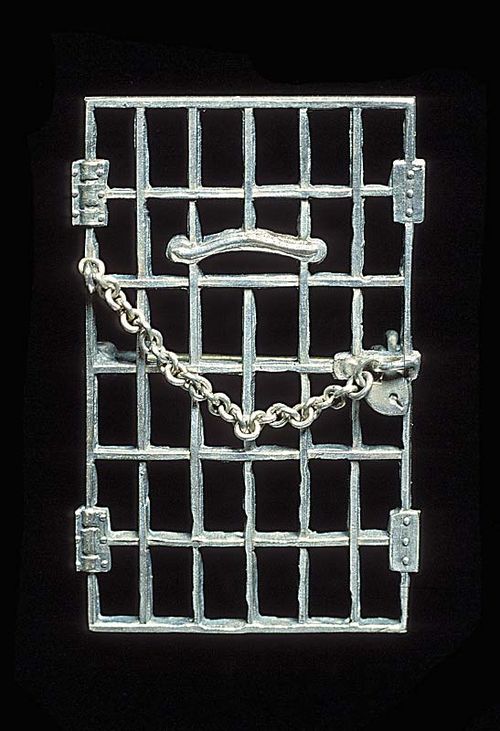 The 19th amendment giving women the right to vote was ratified on August 18, 1920. Women had won the vote but not full equality, so Paul and the National Woman’s Party took up the fight for equal rights. Believing that the more she understood about law the more useful she would be, Paul went back to school and earned three law degrees. In 1923 she drafted the text of the Equal Rights Amendment and worked for women’s equality in national and international forums for the rest of her career. In 1972 when Congress passed the Equal Rights Amendment and sent it to the states for ratification, Paul began a set of charm bracelets now in the museum’s collection. She added a charm engraved with the date that each state ratified the amendment. She had started her fourth bracelet when she suffered a stroke in 1974. An Ohio state charm dated 2/7/74 was the last one that she added. Alice Paul died on July 9, 1977, at the age of 92. She would never know that the amendment for which she had fought so long and hard would not be ratified.

The objects remain. I don’t think of them as jewelry and fabric scrap but as an award for valor, a counting of votes in silver and enamel rather pencil ticks on paper, and a remembrance of battle. Alice Paul dedicated her life to championing women and their rights. Remember her the next time you vote.

The Sewall-Belmont House and Museum on Constitution Avenue was the final headquarters of the National Woman’s Party and Alice Paul’s home for many years. To learn more about the effort to create a memorial to the imprisoned suffrage pickets visit the Turning Point Suffragist Memorial. The museum also offers information about the woman suffrage movement for kids on the OurStorywebsite.

Lisa Kathleen Graddy is the curator of women’s political history in the museum’s Division of Political History. The Alice Paul collection is one of the first things she worked on when she came to the museum and it solidified her interest in women’s history.