Dog tags. New Testament. Standard equipment for the World War II soldier, to be identified if wounded or killed, to find comfort in the darkest hours. But Audie Murphy was no ordinary soldier, as evidenced by the Medal of Honor Certificate displayed next to these items and his “Ike jacket” in the Medal of Honor section of The Price of Freedom: Americans at War. On January 26, 1945, he single-handedly held off six tanks and a force of 250 Germans by climbing on a burning tank destroyer and utilizing its .50 caliber machine gun. He was wounded in the process, but that didn’t stop him. His actions saved his company, and stopped the advancing Germans. By the time the war was over, Audie Murphy had been awarded 33 decorations; among those, in addition to the nation’s highest award for valor, the Medal of Honor, were two Silver Stars, two Bronze Stars, three Purple Hearts, the Distinguished Service Cross, and the French Croix de Guerre. He was the most highly decorated World War II soldier, and few have matched him for bravery since. Which invites the question: what was it about Audie Murphy that impelled him to become a hero?

Audie Leon Murphy was born into a poor sharecropper family near Kingston, Texas, in 1925. One of twelve children, he dropped out of school to support his mother, brothers, and sisters after his father abandoned the family. Support meant not only working for money, but also hunting for food. A friend once commented that he was a good shot, to which he replied that if he wasn’t, his family wouldn’t eat that night. After his mother’s death, he went to live with an older sister and her husband. When the United States entered World War II, he tried to enlist with the Marines, but was rejected because of his age. He persuaded his sister to falsify his birth certificate, and in 1942 he was accepted into the National Guard. He served with the 3rd Infantry Division, first as a private and later earning a battlefield commission as a Second Lieutenant. The 3rd Infantry Division was attached to the Fifth Army and later the Seventh: Murphy took part in the campaigns in Tunisia, Sicily, Italy, France, and Germany.

Upon his return to civilian life, Murphy was an instant celebrity. He parlayed his newfound fame into a movie career, starting with the film Beyond Glory in 1948 and ending with A Time for Dying in 1969. In between, there were numerous low-budget westerns, and the occasional star turn in The Red Badge of Courage and To Hell and Back. In the latter, Murphy starred as himself after Tony Curtis turned down the role. The movie, based on Murphy’s autobiography of his experiences in World War II, was a huge hit, and set box office records that lasted for 20 years. 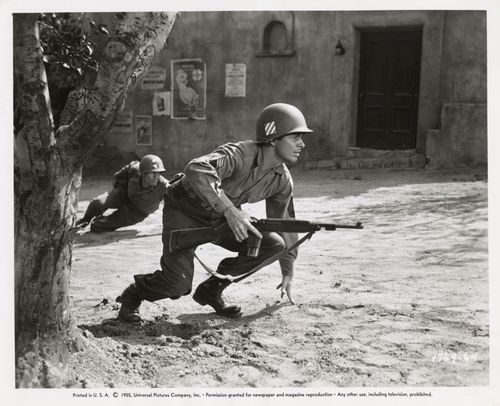 Movie still from Universal Studio’s production of “To Hell and Back”, 1955

By the late 1960s, his acting career was mostly over, and he explored other business opportunities. But the effects of the war lingered for many years after; he suffered from “battle fatigue,” what we now refer to as PTSD (Post Traumatic Stress Disorder). The nightmares, insomnia, and paranoia brought on addictions to sleeping pills. As a soldier who always looked out for his fellow soldiers, his experiences led him to lobby the government for better treatment of veterans who suffered the same symptoms as he did. Sadly, Murphy died in a plane crash in 1971, thus ending any further help he might have provided to the veterans. 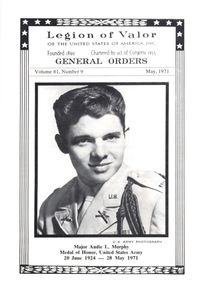 So back to the question…how did a young sharecropper’s son of slight physical stature become the most highly decorated combat soldier of World War II? Murphy was fearless. He was a crack shot. And he took care of his Army family, much as he had taken care of his mother, brothers, and sisters back in Texas. Of the action that resulted in the Medal of Honor citation, first and foremost he was protecting his men. He held off the Germans so the soldiers under his command could withdraw to safety.

Audie Murphy was never about himself; he felt the Medal of Honor he received was as much for the men he fought with as it was for him. In the movie To Hell and Back, in the final scene where he is awarded the Medal of Honor, images of his fallen comrades appear on the screen; Murphy wanted the American public to know that these men were as deserving as he of the award.

Kathleen Golden is Associate Curator in the Division of Armed Forces History.